Official release of the recession indicator temporarily suspended: A sharp decline in the leading index due to the Coronavirus crisis distorts the probability

Reference value: The recession probability in April is 59.4% 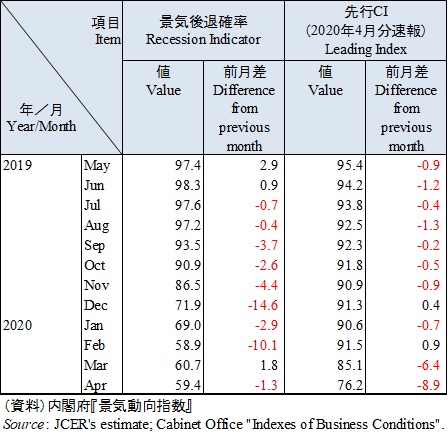 We made adjustments to allow for a sharp decline in the leading index due to COVID-19 to be calculated as the recession probability. Even with this adjustment, future risks are not fully reflected, such as the second wave of infections, intensifying U.S.-China friction, and civil unrest in the United States. This indicator may originally give a false signal, but it aims to provide an early signal, with an emphasis on anticipation for economic trends (Miyazaki, 2016). It is possible for a recent decrease in the probability in this phase to be judged as a false signal, ex post. For now, we will continue to calculate the recession probability as a reference value.

July: The Recession Indicator moved up to 19.6%

－ The Leading Index fell for the first time in two months

June: The Recession Indicator fell to 5.7%

－ The Leading Index rose for the first time in two months

May: The Recession Indicator moved up to 22.1%

－ The Leading Index fell for the first time in a year