The quarterly estimate of GDP for the second quarter of 2015 came out on August 17. It shows that real GDP fell during the quarter by 0.4 percent, or by 1.6 percent in annualized terms. A negative growth rate was something that was not expected even in July, when the consensus forecast was looking at a positive growth of annualized 0.7 percent.

One of the major reasons for the negative growth in real GDP was the fall in private consumption by 0.8 percent (with a contribution to the real GDP growth rate of negative 0.4 percent). It overturned the recovery that had been place after the great drop in the second quarter of 2014 immediately after the consumption tax rate hike. It was a surprise for many who were optimistic against the backdrop of an steady employment growth and a relatively successful spring wage round.

It should be born in mind the impact of employment and wages on household income is becoming relatively smaller in the recent years. As Figure 1 shows, the share of compensation of employees in household disposable income is gradually falling. Instead, the share of social security benefits in cash (bulk of which is pension payments) is gradually rising. It implies that, in order to understand the performance of private consumption, the changes in pension payments also need to be seen. 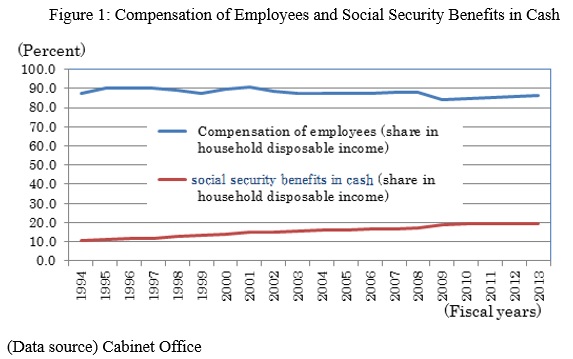 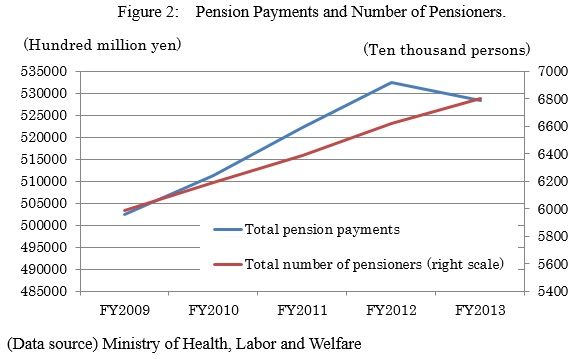 Three reasons for the weak growth in total pension payments

There are a number of reasons for the weak development in total pension payments.

First, the eligibility age for receiving pensions is being shifted towards 65 from 60. Following the shift for the fixed amount component of employees’ pension plans that started in FY2005, the earnings-related components of the pension has started to shift from FY2013. Those who became 60 years old in FY2013 were no longer able to receive earnings-related component as before. Since the pension received by these pensioners was higher than those receiving only the basic pension, it has led to a fall in average pension benefits per pensioner.

Second, the special treatment of pensions which was awarded between FY2000 and FY2002 is being withdrawn. During the period, price indexation of pensions was suspended in order to avoid cuts in nominal pensions at a time of weak macroeconomic conditions. As a result, the pensioners had been enjoying receiving a level of pensions that was 2.5 percent higher than what it should be. In order to bring the level down to the appropriate level, pensions have been cut since FY2013 by a total of 2.5 percent; a cut by 1.0 percent in October 2013, by another 1.0 percent in April 2014, and the remaining 0.5 percent in April 2015. The cuts in pension payments should have affected the total pension payments in FY2013, FY 2014, and FY2015.

Thirdly, the “macroeconomic slide system” is finally been activated. The system was introduced in FY2004 in order to automatically cut benefits in face of the shrinkage in premium payers and extension of longevity. It had not been implemented, however, because of the absence of price increases which was the precondition for its implementation. Its inactivation in FY2015 resulted in reducing the rate of pension adjustment by 0.9 percent (the rate of increase in pension payment was 1.4 percent as a result).

These factors should have resulted in negative or low growth in total pension payments to households.

Growth in private consumption has to overcome the headwind

What is important for the future of private consumption is to see whether these factors will keep on exerting negative influences on total pension payments. In fact, one of the three reasons mentioned above can be considered to be transitory. However, the other two would continue to be in effect in the medium-term.

The withdrawal of the special treatment can be considered to be transitory. In fact, the withdrawal has been completed in April 2015 so that no further negative influence would come from this factor.

On the other hand, the shift of the eligibility age is scheduled to take place for some time yet: It is expected to conclude in FY2031 when the final shift is made for female pensioners.