Start of the spring wage round

Japan is approaching another season of wage negotiation between the employers and the workers: the “spring wage round”. Trade unions across industries have started negotiating for a wage increase and improvement in other working conditions to be concluded in Spring, in the case of larger firms, and somewhat later, in the case of medium and small businesses.

Increase in wages have long been awaited from a macroeconomic point of view. An increase in household income is expected to stimulate household consumption, and, in turn, it is hoped to enable the economy to overcome deflation that has long been haunting the Japanese economy.

Lack of real wage increase in the recent years

At first glance, raising wages may seem difficult: the share of labor income in national income is already high, as Figure 1 shows. 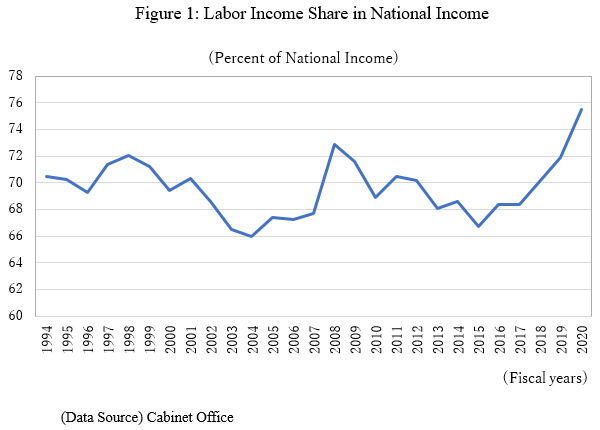 However, it does not mean that the level of labor income itself is that high. In fact, what Figure 1 shows is the stability of wages over business cycles, a special feature of the employment system we have in Japan since the high-growth period.

The source of compensation of employees and operating surplus of firms is in the national income (value added produced in a country plus net receipt of income from abroad). If we think of the relationship in terms of real value per employee, the source of real compensation of employees per employee (real wages, hereafter) and real operating surplus of firms per employee (real profits, hereafter) is in the real national income per employee (labor productivity, hereafter). What is of interest is how labor productivity has been distributed between real wages and real profits.

As Figure 2 shows, labor productivity has shown swings, reflecting the impact of business cycles during the period. From early to late 2000s, which correspond to the longest expansionary phase in the postwar period, labor productivity showed positive increase. However, it dropped significantly when global financial and economic crisis broke out in 2008. It recovered in the 2010s, especially under Abenomics, but started to fall again after 2018 as the economy turned into a recessionary phase, and was affected gravely by the COVID-19 pandemic. 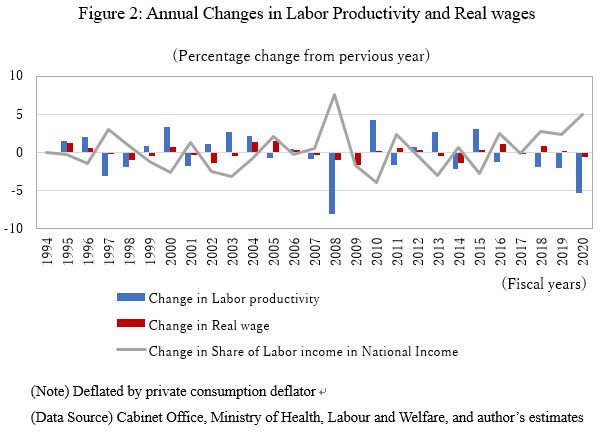 Real wages during the period, on the other hand, only showed a modest swing. It is because adjustment in wages basically took place in overtime pay and bonuses which only have small shares in total wages. The basic pay, which is the main component of total wages, in contrast, was more stable: it did not fall during the recessionary phases but did not increase either during the expansionary phases. As a result, the share of labor income in national income showed a large swing: labor income share falls in expansionary phases and rises in recessions.

Increase in real wages and accumulation of retained earnings

The difference between labor productivity and real wage is real profits. What does the long-term stability in real wages mean for real profits?

The developments in real profits can be seen in Figure 3. It is interesting to find that in the 1990s, the decade which suffered from the negative legacy of the burst of the bubble, labor productivity, real wages, and real profits were all basically flat. The situation changed after the turn of the century when labor productivity started to show a gradual, albeit modest, growth. However, the most of the fruit of the productivity increase was passed on, not to real wages, but to real profits: except for a brief interruption caused by the global financial and economic crisis, real profits basically was on a rising trend until it was negatively affected by the COVID-19 pandemic. 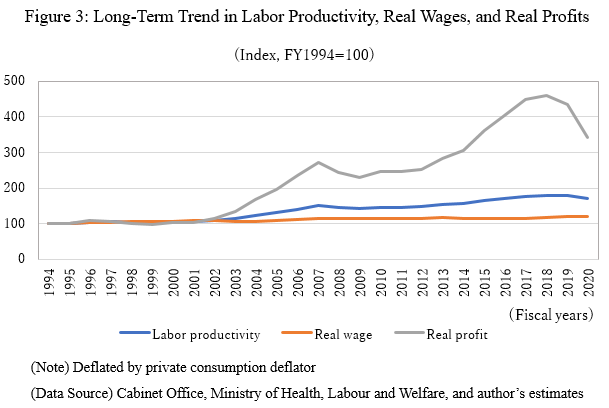 It may seem puzzling if we compare Figure 3 with Figure 1 where share of labor income in national income remained almost flat over the long-term. It can be explained by the fact that decline in the share in expansionary phases has more significant impact on real wages than the rise in the share in recessionary phases because the size of national income is larger in the former phase than in the latter. 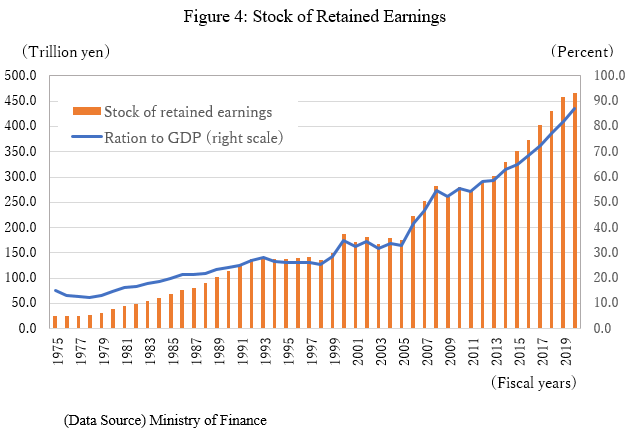 If the accumulated retained earnings could be mobilized to finance wage increases (in a delayed manner), it may have the positive impact that was hoped for. However, if an increase in real wage needs to take place, and if the wage increase is going to stimulate household consumption, there are some necessary conditions that need to be met.

Second, the wage increase needs to show up as an increase in total wage payment for the economy as a whole. The amount of wage increase that is often mentioned as an outcome of the spring wage round is inclusive of the rise in wage due to a rise in seniority. The increase in seniority may be important for each worker. However, from a macroeconomic point of view, it does not mean an increase in macro-terms: it is only a change in the name of the worker receiving wages based on the existing pay schedule. What is more important in macro-terms is the upward shift of the pay schedule itself or an increase in basic pay, described as a “base-up” in Japan.

Spring wage round is an opportunity

If the decision whether to raise wages is left to individual firms, especially is a deflationary environment, they may remain reluctant to do that. It is because raising wages unilaterally is going to affect their competitiveness in a negative way. It would be the case even if the firms are aware of the positive implications of the wage increase in macroeconomic terms: it is an example of a “coordination failure”.

In this respect, spring wage round offers firms with a rare opportunity of raising wages across all firms in the industry. It would have an impact on household income without affecting their relative competitiveness.

If we are to stimulate the economy and overcome deflation, we should consider achieving a wage increase this spring.