Recovery from a crisis: US and Japan

The financial crisis, which first emerged as the subprime mortgage problem in the US, quickly developed into a global economic crisis after the collapse of the Lehman Brothers. Its impact was felt, not only by the US, but also by Japan and other parts of the world. The steep decline in economic activities prompted the governments to introduce unconventional polices in an effort to prevent economies from collapsing.

Quick recovery of the US economy

Even though it was the origin of the global financial and economic crisis, the US economy seems to have been able to overcome the crisis fairly quickly. For example nominal GDP seems to have returned to the pre-crisis peak in about two years, and real GDP in three (Fig.1). 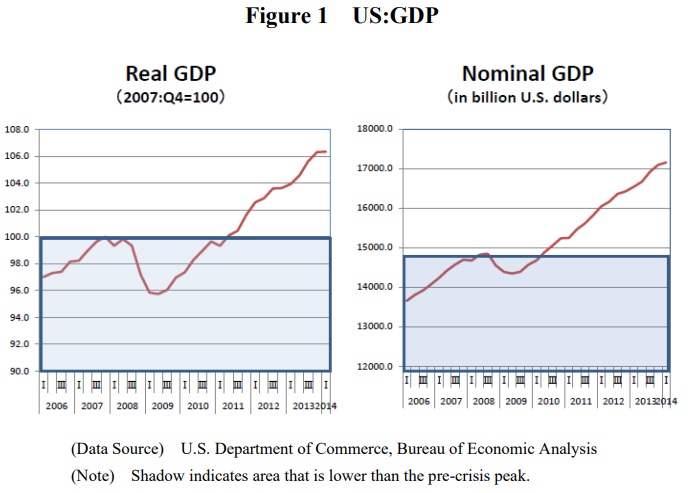 Asset prices, on the other hand, have shown somewhat a mixed picture. Stock prices, as seen in Dow-Jones Industrial Average, has taken five years to achieve the peek reached in the latter half of 2007. On the other hand, Case-Shiller U.S. National Home Price Index has not yet reached, and probably would be difficult to reach, the peak which was achieved as a result of the bubble. Even so, housing prices are showing an upward trend since the latter half of 2007. (To confirm, please refer to the figures in my Japanese column, Economic Birdseye, for April 2014.)

Belated recovery of the Japanese economy

Compared to the quick recovery of the US economy, the situation in Japan is distinctly different. Even though Japanese financial sector did not suffer much from the subprime mortgage crisis, the real sector has taken much time to regain the pre-crisis peak, and in many areas it has not.

The Japanese real GDP, which reached its peak in 2008 Q1, nosedived for four consecutive quarters. It started to recover since then, but still has not completely recovered the peak (even 2013 Q4 is slightly lower than the peak). As for the nominal GDP, it has remained up to date almost flat after the fall, deflation being an additional burden (Fig.2) 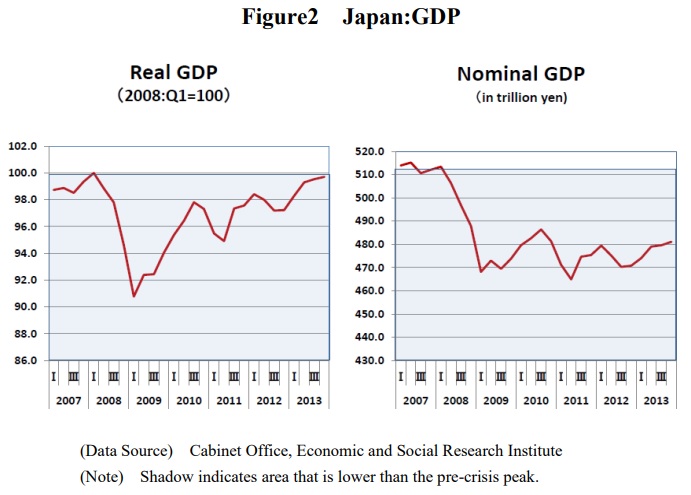 The situation is the same in asset prices. Nikkei Stock Average has not recovered the peak after nearly seven years. Urban Land price Index still seems to be in the adjustment phase that started with the burst of the bubble in the early 1990s. We are still unable to see an unambiguous rising trend in land prices. (For figures, please also refer to the Economic Birdseye for April 2014.)

Contrasting performance of the labor market

What is the reason for the difference between the two countries?

What is usually mentioned is the difference in the flexibility of the economy. In general terms, the U.S. economy enjoys the benefit of market mechanism, in which prices changes flexibly and rapid adjustment are made by the economic agents, so that the economy swiftly reaches a new equilibrium. In contrast, Japanese economy embeds more rigidity, due to the government regulations and business customs that restrains the functioning of market mechanism, which results in limited flexibility of prices and slow adjustment of resources.

However, while it may sound acceptable, the logic does not seem to apply to the labor market. The performance of the labor markets in the US and Japan is completely opposite of what have been mentioned above.

The unemployment rate in the US, for instance, is still 6.3 percent in April 2014, much higher than pre-crisis lowest of 4.4 percent (left-hand chart of Fig.3). 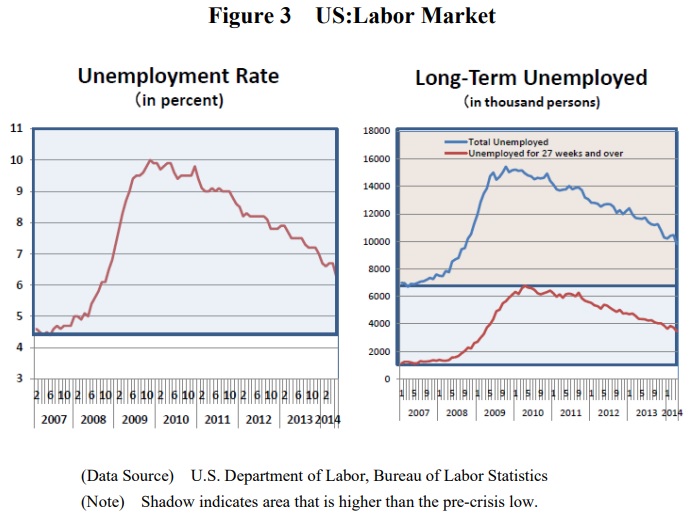 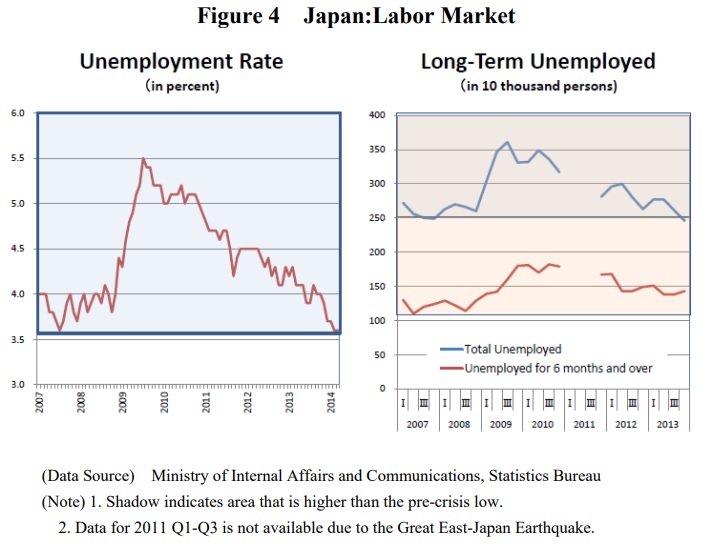 What then is behind the difference in performance of labor markets in the two countries?

Long-term unemployed is said to emerge when rapid innovation is taking place in the economy. In this kind of an environment, employees’ skill quite easily becomes obsolete and they are faced with less possibility of being employed. This kind of a situation has been considered to have been behind the high unemployment in the European countries but a similar kind of a situation may also be working in the U.S.

This kind of a situation is considered to be difficult to emerge in Japan. It is because Japanese firms, particularly the big ones, still observe lifetime employment, making it difficult to lay off workers at times of difficulty. As a result, firms are obliged to retain workers even though they have become redundant. Labor hoarding as such was witnessed during the financial and economic crisis of the late 2000s.

In addition, the Government encouraged labor hoarding by implementing such policies as the “Employment Adjustment Subsidy”. When firms ask their employees to stay out of work or to engage in training instead of laying them off, the Government subsidizes a part of the wage payments.

These efforts on both the firms and the government should have contributed in restraining unemployment, thereby long-term unemployment as well.

Yet, hysteresis does not explain all the problems.

First, it should be noted that even in Japan, which has witnessed an overall unemployment rate that has fallen below the pre-crisis low, the number of long-term unemployed has not. While at a lesser magnitude than in the US, staying at one and a half times the pre-crisis level, hysteresis may also be at work. In this sense, the Japanese system has not totally dodged the problem of obsolete skills.

Second, there are studies that find the U.S. high unemployment rate to be of a cyclical nature rather than a structural one. For instance, Lazear and Spletzer (2012) has found no evidence of a mismatch of skills with job vacancies.

These considerations lead us to another possibility. That is the difference in the improvement in labor productivity.

As Fig. 5 shows, labor productivity in the US has risen significantly after the crisis. It has risen not only in the recovery period, but also during the crisis period. It would imply that higher real GDP is necessary to absorb the unemployed that has increased during the crisis (increase in cyclical unemployment rather than structural). 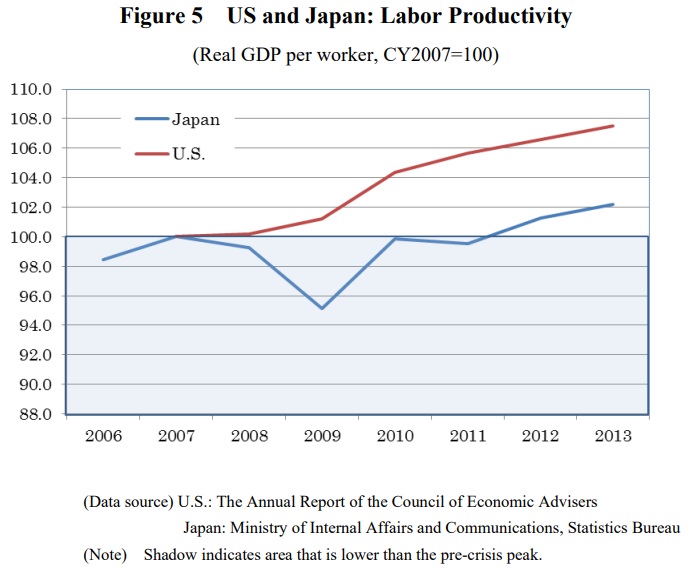 Japanese system of retaining employees at times of difficulties may have weakened incentives to increase the efficiency of their business and transform it when necessary. In addition to discouraging the reallocation of labor from low productivity to high productivity firms, it would have weakened the increase in productivity within firms. They together will serve to further dampen the already weak drive to higher productivity due to the low rates of exit and entry of firms.

It is interesting to note that a similar problem is emerging in the UK. It is also suffering from stagnant labor productivity since the crisis, which is in stark contrast with the improvements witnessed in the past recessions. Recent studies on the UK situation have suggested that lower reallocation of labor between firms, and lower exit of firms may have been the important factors behind the poor performance. See, for instance, Barnett, Chiu, Franklin, and Sebastia-Barriel (2014).

Towards a resilient economy

Such a situation shows the difficulty we face in achieving a resilient economy; an economy which can sustain economic growth with rising productivity while, at the same time, secure high employment. In order to gain insights for policy recommendations, further analyses of the mechanism behind the recent performances of real GDP, unemployment rate, and labor productivity seem essential.