Global value chains to be reestablished

In the recent period, we have seen a couple of events that will lead to a reestablishment of the global value chains that is in place at present.

One of them is undeniably the trade tensions between the United States and China. US has raised tariffs, in four stages since last July, on 250 billion US dollar worth of imports from China, which met retaliation by the Chinese on its imports from the US. The tariff increases have reduced the trade volume between the two countries, forcing them, and its trading partners, to reassess the global value chains that have been built up over the years.

The other is the tightening of Japanese export controls on three materials to the Republic of Korea that became effective in July this year. Since they are the materials that are essential for Korea’s semiconductor industry, whose product commands about 20 percent of Korea’s total exports, any delay in the import of these materials would have a serious negative impact on the Korean economy. The quick decision made by the Korean government to invest heavily in developing these materials domestically reflects their concern. Korea will inevitably have to review the existing global value chain in order to adapt to the new situation.

Japan has a long history with global value chains: direct exports from the producers in Japan to the consumers in the US was replaced, particularly after the Plaza Accord in 1985 which initiated a steep appreciation of yen exchange rate, by indirect exports from Japan that was made possible by Japan exporting intermediate goods to China, and China assembling final goods to be exported to the US.

These changes taking place in foreign trade cannot be traced by the conventional trade statistics. If you look only at the conventional trade statistics for Japan, for instance, it will only allow you to see export of the material to an intermediate-goods producing country, whose product will be shipped to a final-goods producing country. It will not show, in any way, the dependence of the Japanese producers on the consumers of the final product. Production through global value chain also implies that exports of goods by a country usually include value added produced by a country from which the input or intermediate goods to produce those goods were imported. Therefore, only by looking at the conventional trade statistics will not tell you how much have exports actually contributed in producing value added in the exporting country itself.

That is why data on foreign trade in value added (TiVA) has been estimated by the OECD. It allows you to trace back the producer of the value added that is included in exports and imports of a country. In the following, TiVA will be made use of, in order to see the impact on Japan of the global value chains that has been established so far, and the possible implication that reestablishing global value chain may have on the Japanese economy in the future.

Implications of the Global Value Chains on value-added production 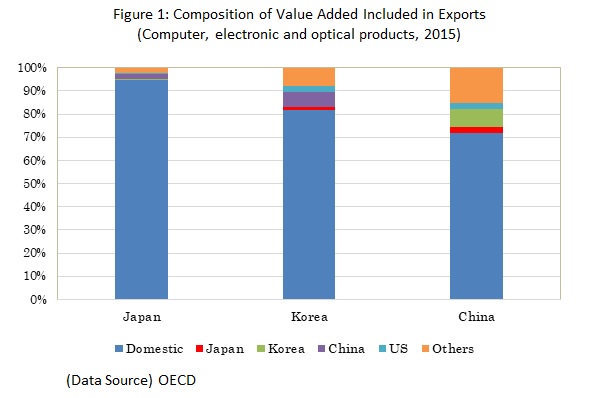 Figure 1 shows that, as we go downstream of the global value chain (i.e. Japan → Korea → China), the share of domestic value-added falls, and the share of foreign value-added rises. If we focus on the share of Japanese value added in other countries’ exports, it is 1.4 percent in Korea’s exports, and 2.4 percent in China’s. The rise in the share of Japan in China’s exports shows that it includes, not only the Japanese value added included in Japan’s indirect exports to China via Korea and others, but also the value-added included in Japan’s direct exports to China.

As a result of the production through the global value chain, imports of “computers, electronic and optical products” by the US includes value added of many countries including China, Korea, and Japan, as Figure 2 shows. 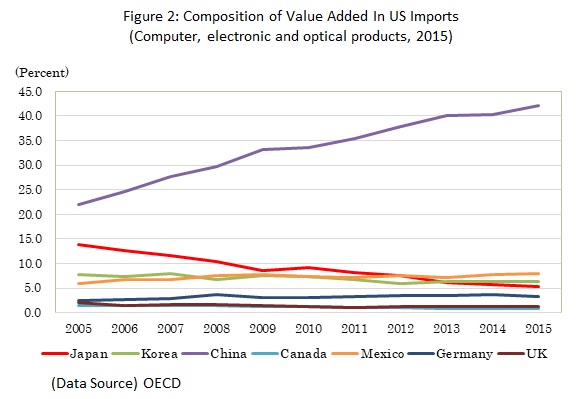 Figure 2 shows that the share of China’s value added is increasing significantly: its share in 2015 is 42.1 percent. Mexico, a member of NAFTA also has a high share at 7.9 percent in 2015. In contrast, Japan’s share is decreasing rapidly, form 13.8 percent in 2005 to 5.3 percent in 2015, falling below Korea’s 6.3 percent in the same year. It shows that, as global value chain developed, Japan’s contribution in imports to the US has fallen.

So far, we have been looking at the situation in “computers, electronic and optical products”. How would it look like if we look at the contribution of each country in the total final demand of the US? It is shown in Figure 3, which can also be interpreted as showing the magnitude of the average impact on value added of the specific country when total foreign demand of the US increased. 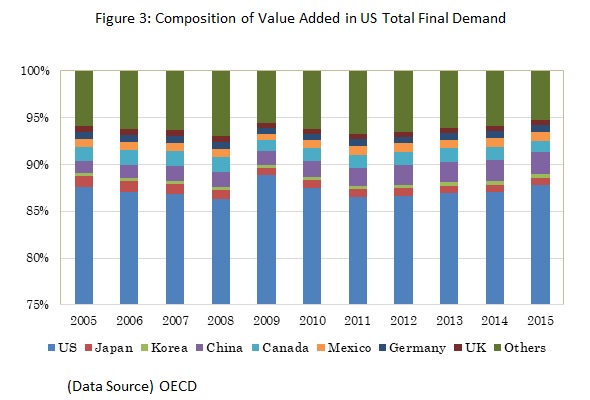 Naturally, in the final demand, value added domestically tends to have a large share. As Figure 3 shows, the share of the domestic value added in the case of US is more than 85 percent. In order to look at foreign shares more closely, Figure 4 is provided which shows the shares of main foreign countries between 2005 and 2015. 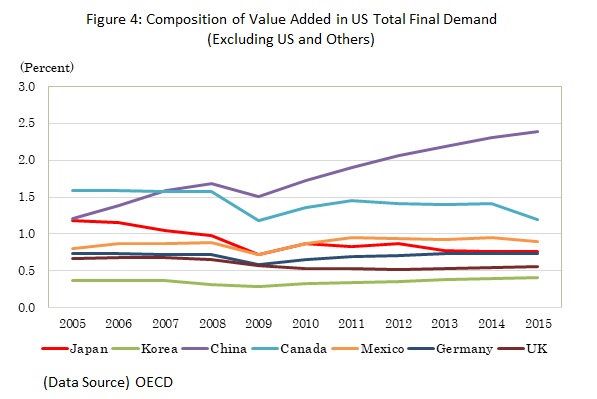 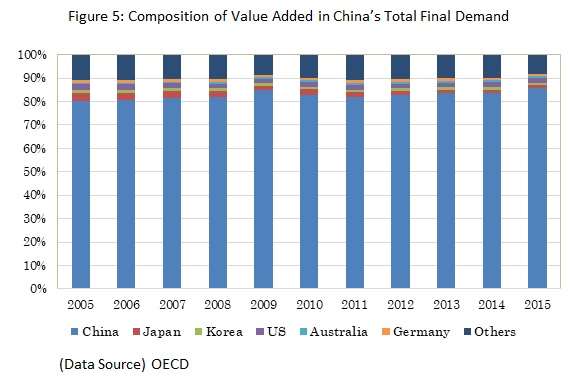 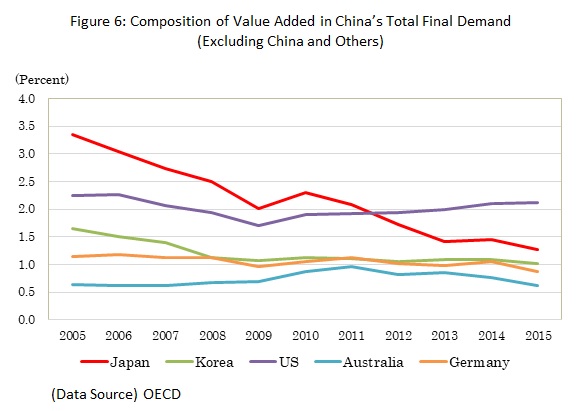 What should we expect from new global value chains?

We have been seeing the implication of the global value chains on the value added included in foreign trade, and how much an increase in total final demand in the United States and China have induced value-added production in Japan, using the TiVA data.

During the 10 years between 2005 and 2015, the Japanese economy saw a week domestic demand, and a performance depending much on foreign demand. However, what TiVA tells you is that, during the same period, Japan’s value added induced by the total final demands in the United States and China have been falling. It means that the division of labor by establishing global value chain among countries has led Japan to specialize in products and production processes that are low in terms of value-added intensity. It meant that Japan has increasingly lagged behind in benefitting from the growth taking place in the US and China.

When production sites were shifted from Japan to oversees, notably to China, there were fears that Chinese production is substituting for Japanese production. The counterargument was that, while Japan no longer produces and exports the final product, Japan still produces and exports intermediate goods to China for its production: therefore, the nature of production in the two countries are more of complements rather than substitutes. However, above findings imply that products and production processes with higher value-added intensity have shifted to foreign countries.

As it was mentioned in the outset, we are about to see a reestablishment of global value chains in the near future. This time, it is expected that, rather than making most of the progress made in globalization, the reestablishment will give more emphasis on domestic production. If this is the case, it implies that Japan may not be able to export even intermediate goods, nor inputs for their production, to these countries. It may well lead to even lower value-added production in Japan.

It is clear that Japan needs to make every effort to put a stop to protectionist movements that has emerged in the recent years. However, if establishment of global value chains is inevitable, efforts needs to be made so that reestablishing the chains would mean higher value-added production in Japan. This is the only way Japan can benefit from the buoyant growth taking place in the global economy.