Reflecting on the Heisei-era: Macroeconomic Performance of the Thirty Years

Change of era from Heisei to Reiwa

The Heisei-era will end on the last day of April. From May 1st, the new era of Reiwa is going to start. For many in Japan, the occasion gives a feeling of a fresh start: people will look forward and imagine what they can do to make the most of the future. For economic policies as well, it provides us with a good opportunity to think about what the optimal set of policies to serve the nation would be.

This month’s column will look back at the Heisei-era and review the macroeconomic performance of the Japanese economy during the thirty years. It aims to make clear where we stand and to form a good basis for the discussions to take place on the future path of economic policies.

Heisei-era as seen from the business cycle

From the business-cycle point of view, the Japanese economy in the Heisei-era has two interesting features.

First, there have been quite a number of shocks during the period that led the economy into recessions. The recessions can be identified by looking at the Composite Index that shows the direction and the strength of the business cycles in Japan. 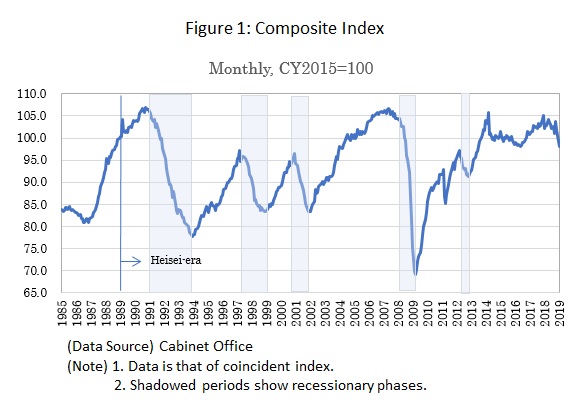 Heisei-era started in January 1989. It was at the time when the bubble period was at its peak. But the bubble bursted soon afterwards: the highest stock price was recorded on the last business day of December 1989. Since February 1991, the Japanese economy entered a recessionary phase. While the government introduced a number of stimulus policy packages and the Bank of Japan cut its official discount rate, the recession had lasted until October 1993.

In April 1997, consumption tax was raised: it was accompanied by a big swing in domestic demand. It was followed by the slowdown of Asian economies that resulted from the Asian Currency Crisis that broke out in Thailand in July 1997. From November that year, the Japanese financial system became seriously unstable: A number of prominent commercial banks and securities companies collapsed in 1997 and 1998. Because of the series of events that exerted considerable downward pressure on the economy, it is now identified that the economy was in recession between May 1997 and June 1999.

Burst of the dot-com bubble in the United States also exerted a large negative impact on the Japanese economy. The short expansionary phase was put to an end in November 2000. The Japanese economy was at the verge of a deflationary-spiral, a negative loop between deflation and recession, in 2001. It was when the external environment started to improve that the trough of the business cycle was reached in January 2001.

Burst of the housing market bubble in the United States and the rapid rise in primary goods prices that followed worsened Japan’s terms-of-trade: the Japanese economy was once again in a recession after February 2002, though the decline in economic activities was initially very mild. It suddenly started to fall sharply when the Lehman Brothers collapsed, and the US recession developed into a global economic and financial crisis. The drop in economic activity in Japan was significant: the fall in real GDP turned out to be greater than that in the US. The recession reached its trough in March 2009, only after the concerted actions by the major economies started to show their impact and the global economy gradually grew out of the global crisis.

In March 2011, Japan was shaken by the Great East-Japan Earthquake which had a devastating impact on the society and the economy of the Tohoku region. It also affected other parts of Japan through the complex value chain. However, its macroeconomic impact was short-lived because of the reconstruction efforts that started soon after the incident. In contrast, the economy wasn’t able to resist the negative impact of the slowdown of the European economy and the accompanying appreciation of the yen: The Japanese economy fell into a mini-recession between March and November of 2012.

Second feature of the business cycle in the Heisei-era was that, despite the frequent shocks and consequent recessions that the Japanese economy has gone through, two of the longest expansionary phases in the post-war period was seen during the period.

One of the longest expansionary phases took place between January 2002 and February 2008. Supported by the favorable external environment, the expansionary phase continued for 73 months. It overtook the previous record of 57 months achieved during the High-Growth period, between October 1965 and July 1970 (the Izanagi-boom).

The other one started in November 2012. It coincides with the start of the Abe administration and the Abenomics regime. It has already become the second longest. If it was still in place in January 2019, the expansionary phase would have lasted for 74 months, overtaking the previous record of 73 months mentioned above. However, the recent data reveals that the Japanese economy has been affected by the trade tensions between the United States and China, and the evidence of a sustained expansion has become a bit shaky. It would require some time for the economists to be able to judge whether it has made a new record or not.

Even though the two longest expansionary phases have been seen in the Heisei-era, ordinary citizens do not seem to have enjoyed the positive performance.

The reason for the gap seems to come from the very low GDP growth rates and the accompanying deflation during the period (Figure 2). 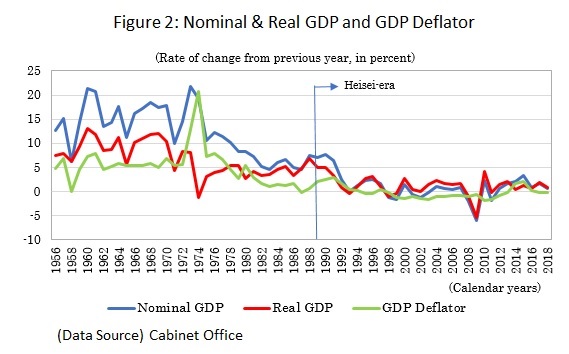 Furthermore, as the difference between the nominal and real growth rates shows, the rate of change of the GDP deflator (a general price index) has fallen and even tuned negative during the Heisei-era: it used to increase by about 5 percent in the High-Growth period, but it actually fell by 0.1 percent (difference due to rounding) during the Heisei era. The fall in aggregate prices, or deflation, that has been with us almost throughout the period should have been the additional factor that gave the people a negative impression.

Heisei-era as seen from the potential growth rate

Behind the low growth during the thirty years was the sustained decline in potential growth rate of the Japanese economy. 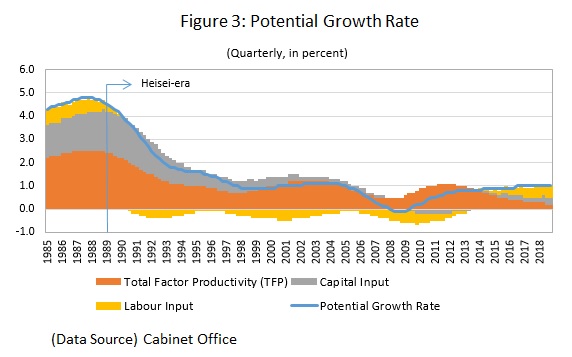 How to deal with the low growth syndrome is the greatest challenge that needs to be addressed in the Reiwa-era. The challenge is important because, unless we are able to achieve a higher growth, we will not be able to sustain the economic prosperity Japan currently enjoys: the areas that will be threatened include fiscal and social security systems which form the basis of the people’s daily lives.

The basic direction of the policies that needs to be taken is clear. We need to reform the economic systems that no longer match the underlining conditions of the Japanese economy. We also need to offset the negative impact coming from the aging and shrinking population. This column has already touched upon these issues in a number of occasions but will come back to discuss them in the future as well.