Secular Stagnation: Its relevance to Japan

Features of a secular stagnation

Since the speech made by Professor Lawrence Summers in November 2013, the notion of the “Secular Stagnation” became the keyword in understanding the difficulties that advanced industrial countries face.

At first, it may be surprising to hear a discussion about secular stagnation at a time when the U.S. economy is showing steady recovery allowing the QEIII to be tapered, and the lifting of the policy rate from zero has come to be expected in a reasonably near future. According to Summers (2014), the secular stagnation is a state of the economy which can be characterized by the following features:

First, potential GDP of the economy is affected by a serious economic and financial crisis so that its path kinks downward. While the economy seems to narrow the GDP gap and converge to the potential GDP in the aftermath of the crisis, the level of the actual GDP and its growth rate is much lower that what it would have been without the crisis.

Second, monetary policy tends to be ineffective under such circumstances because the balance of savings and investment has changed in a way so that the equilibrium would not be restored unless the interest rate is negative (negative natural interest rate).

Third, as a consequence of the ineffectiveness of monetary policy the economy would not be able to return to the pre-crisis potential GDP path and would be stuck to the lower potential GDP.

The evidence for the secular stagnation is basically taken from the recent performance of the U.S. economy. However, Japan is frequently cited as a country which has followed a similar path albeit almost twenty years earlier. In the following, we will see to what extent the argument of the secular stagnation actually applies to Japan. 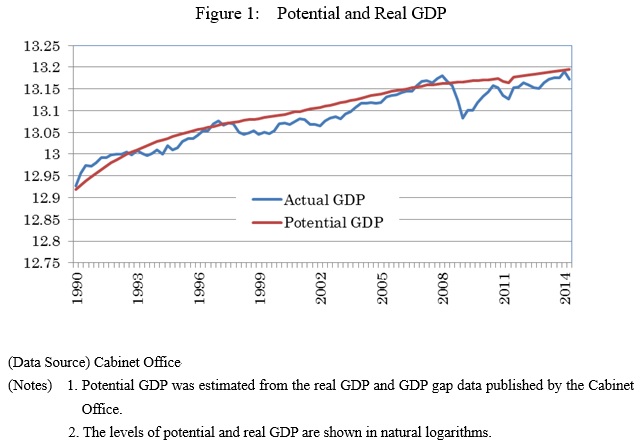 The above result may seem to support the argument for the secular stagnation. It is consistent with the story that crisis has affected the supply side of the economy thereby pushing down potential growth. However, we need to take into account that a significant demographic change was also at play during the period. In particular, working age population reached its peak in 1997 and is shrinking thereafter. Much of the kink in the potential GDP may be explained by the declining contribution coming from labor input. 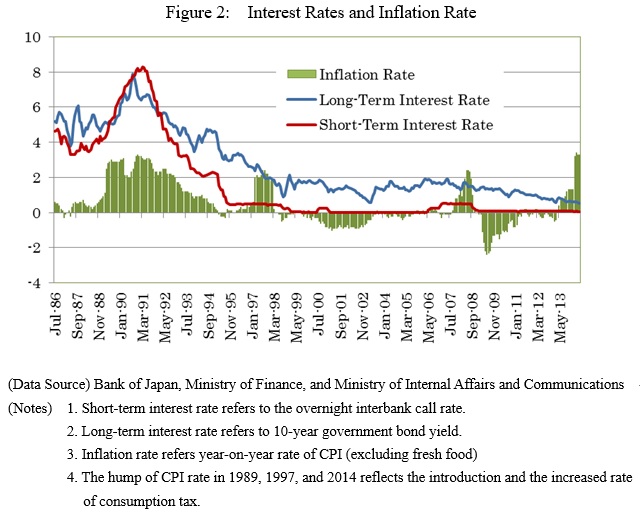 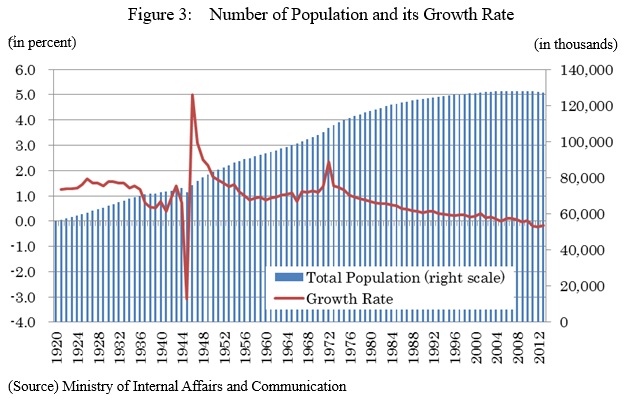 Finally, while it is true that monetary policy is facing a great challenge, it does not mean that it has no ability in influencing the economy. It could be true that if the natural interest rate is negative it may be difficult to lift the economy only by interest rate policy. Even in this case, however, if we can successfully influence inflationary expectations, as has long been suggested by Professor Paul Krugman and now is attempted by the Bank of Japan, we may be able to achieve negative real interest rate.

What could be emphasized, however, are the existence of two more channels of monetary policy which are the main features of the current unconventional monetary policy. One is the portfolio rebalancing channel, and the other is the exchange rate channel.

Portfolio rebalancing channel is expected to work when a central bank tries to expand its balance sheet in order to stimulate portfolio rebalancing in a hope to raise asset prices and stimulate spending. However, this channel has a risk of fueling bubbles. While it has its potential in stimulating aggregate demand, the high cost we had to pay in the aftermath of a bubble leads us to be cautious in relying solely on this channel.
(For the possibility of a bubble in the U.S. housing market, please see my Japanese column in July 2014: https://www.jcer.or.jp/j-column/column-saito/20140716.html.)

Exchange rate channel is an element of the monetary policy that has been successful in supporting the economy in Japan. By reversing the trend of overshooting of the yen, it was able to lift the economy while avoiding beggaring-thy-neighbor. In fact, the exchange rate channel should be taken into account when discussing the potential of monetary policy under a zero lower bound constraint.

The point to note, however, is that depreciation of the exchange rate in Japan has succeeded in supporting the economy without increasing export volume. Because the pass-through rate of exchange rate changes to foreign-currency denominated export prices had fallen almost to zero, depreciation has benefitted only through increase in export prices in yen-terms. As a result, it did not contribute much in raising effective demand of the economy directly.
(For further discussion on the Japanese exports, please see my column in June 2014:「Export Performance under Depreciation」)

Nevertheless, if the increase in corporate profits as a result of the depreciation had stimulated business investment, that would have had an indirect contribution of the depreciation to effective demand. However, the recent feature of the corporate sector is that when sales surge it tends to retain the profit rather than to spend in machine and equipment.

That leaves us with the impact of increased corporate profits on raising wages and employment. In fact, in addition to the expectation that these would eventually take place, increase in wages and employment seems to be behind the relatively strong performance of private consumption we have witnessed so far. Exchange rate channel may be more effective in raising aggregate demand than other channels, at least in Japan.

Root cause of the secular stagnation

On the basis of his analysis, Summers (2014) discusses policy measures other than monetary policy that would be successful in raising aggregate demand. However, in addition to the fact that they tend to be politically difficult to implement (eg. suspending fiscal austerity and increasing public infrastructure investment), they may also turn out to be ineffective, at least in Japan. That is because secular stagnation may be a consequence of a deeper structural problem which may nullify any potential impact coming from such measures as well.

If that is the case, it points out the importance of formulating and implementing structural policies, or the “growth strategy in the Japanese context. The discussion of secular stagnation seems to provide us with another opportunity to reconfirm our policy agenda in addressing the difficulties we face.
(On the feature of the growth strategy that is needed in Japan, please see my column in June 2013:「Waiting Eagerly for the Growth Strategy」)