SNA Revision : Has the picture of the Japanese economy changed?

Japanese system of national accounts (SNA) underwent a major revision last December. While the stock tables are still to be published (expected in January 19), most of the flow tables are already available to the public.

I would like to take this opportunity to see if the new figures change the picture of the Japanese economy.

Reasons for the Revision

The latest revision of the SNA is a major one in the sense that three independent revisions are made simultaneously at this timing.

First is the finalization of the preliminary figures that have been published quarterly in the past year. The revision of this nature takes place every December, when the new information provided by the annual statistics such as the Census of Manufactures and central and local governments’ budgets are incorporated. They are used to replace the GDP estimated from the demand side by GDP estimated from the supply side by applying the commodity-flow methodology.

Second is the benchmark revision that takes place every five years. Such rebasing takes place to incorporate the information included in the input-output tables and other major statistics that are published every five years. At this timing, the base year for the deflators is also changed to the year of the latest input-output table: The base year has been changed this time from CY2005 to CY2011.

Although the revision from this aspect usually takes place every five years, it has taken six years since the last revision was made. That is because it took six years to compile the latest input-output table for 2011, which tried to incorporate information that is collected through the newly launched economic census of 2011.

Third is revision related to the adaptation of the national account system to the latest SNA manual published by the United Nation; the 2008 SNA. It includes changes such as the change in the treatment of research and development (R&D) activities. Spending on R&D is now treated as a part of capital formation instead of treating it as a part of intermediate input. It leads, for instance, to considerable change in the level of private business investment.

The latest SNA revision has led to changes in the GDP growth rates in both nominal and real terms. 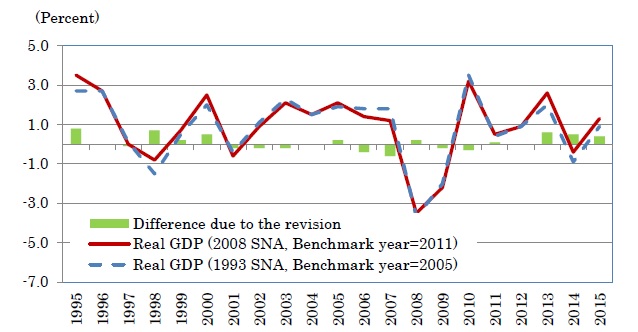 As for the rate of change of the GDP deflator, there is only a minor upward revision by an average of +0.1 percentage points for the whole period. It is significantly limited compared to the past revisions. It owes to the introduction of the chain-linked index to the deflators: It removed the shortcoming of the simple Paasche type fixed-based index that often led to major upward revisions of deflators.

According to the information provided by the organization in charge of compiling the SNA data in Japan, the Department of National Accounts of the Economic and Social Research Institute of the Cabinet Office, the upward revision is largely due to its adaptation to the 2008 SNA, as Table 3 shows. However, as the same Table also shows, the increase in the upward revision in the three years to FY2015 is due to revisions other than the adaptation. It should come from the impact of the changes in the industrial structure that was revealed in the latest input-output table for 2011.

Table 3: Factors behind the Revision of Nominal GDP

Changes in the picture of the Japanese economy

One of the interesting features that the new SNA series reveals is that the speed of the recovery from the global financial and economic crisis now seems more rapid than we thought.

With regards the profile of the developments in real GDP, it is not so different from before. As Table 4 shows, while the level of the real GDPs has fallen, the profile maintains that the real GDP recovered the pre-crisis level in FY2013. 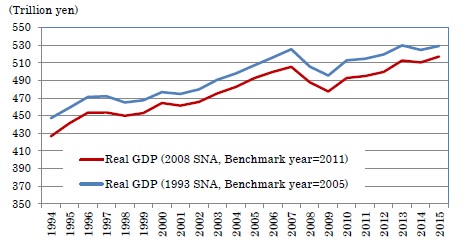 As for the nominal GDP, as the preceding Table 2 shows, the figure for FY 2015 in the old series was 500.6 trillion yen, still 5.7 percent lower than the pre-crisis peak of 513.0 trillion yen at FY2007. However, after the latest revision, the nominal GDP for FY2015 is now 532.2 trillion yen, which is slightly above the FY2007 level of 531.0 trillion yen. Although it has taken more time than real GDP, nominal GDP also seems to have recovered the loss incurred by the global financial and economic crisis.

The changes in other main indicators are more limited. The picture, therefore, is not that different from before the latest revision. I will touch upon three of them.

First is the labor share of the value added (share of compensation of employees in the national income). It has been revised downwards, except for the period between FY2008 and FY2012. However, it still maintains the declining trend that can be observed since FY2008: It is 67.8 percent in FY2015, the lowest level since FY2008.

Second is the household savings rate. It has been revised upwards, though the magnitude of the revision is limited for the years after FY2013. It still retain the profile of showing a rebound in FY2013: the new series shows that, after reaching -1.3 percent in FY2013, it has recovered somewhat to 0.7 percent in GY2015.

Third is the net lending of households. It has been revised upwards for most of the period. However, for the years after FY2013, the figures are revised downwards. As a result, the fall in net lending since FY2009 is steeper than before. In fact, net lending for FY2013 now shows that it is -2.5 trillion yen, the first negative figure for the series.

Historical data need to be extended

As we have seen, the changes brought about by the latest SNA revision does not call for a significant change of the picture of the Japanese economy. The latest revision, however, reveals some new features that economic analyses need to address.

It is hoped that economic analysis using the new SNA series will quickly be undertaken and published. However, for the analysis to be meaningful, data series need to be long enough. Although the new SNA goes back 21 years to FY1994, much longer than the past revisions, it is hoped that it goes back further: hopefully to cover the bubble period of late-1980s and the early years of the lost decade (1990s).