Statistical discrimination as a cause of unfair treatment of females

One of the news reports that attracted much attention last year in Japan was the news that a medical college discriminated against female students in its entrance exam: even though some female students did better than males they were denied entering the college. The reason for such an action seemed to have been in its understanding that, when its female graduates join its affiliated hospital as staff doctors, they tend to take child-care leave which force work-load to be borne by their male colleagues. The medical college limited the entrance of females because it wanted to avoid the difficulty in managing the shifts of the doctors.

Gender difference in the ratio of workers taking child-care leave

It is a fact that there is a huge difference between the ratio of females and males taking child-care leave. Both have risen in the past decades, but currently, the ratio for females are more than 80 percent while that for males are still only about 5 percent (Figure 1). 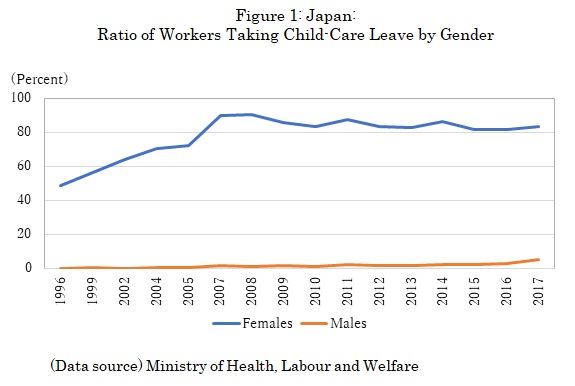 This is in stark contrast with the situation in the Nordic countries. The ratio of males taking child-care leave in those countries are almost equivalent to that of females at around 80 percent (Figure 2). 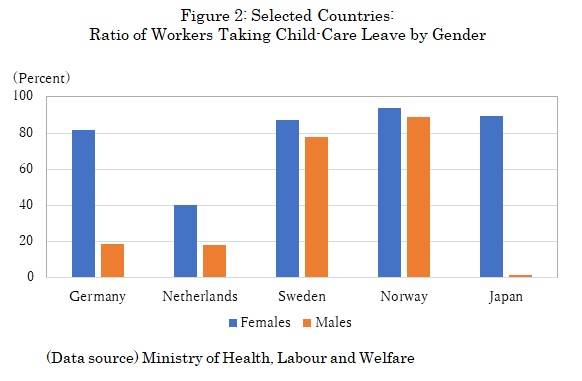 In the Nordic countries, it is hard to think that a statistical discrimination of the kind witnessed in Japan can take place. This view is consistent with the fact that the Nordic countries have the least difference in labor force participation rates between females and males, whilst Japan has a large difference (Figure 3).

How can we then put females and males on an equal footing basis in terms of taking child-care leave?

There could be two options.

However, if this is going to be the case, we need to make female workers’ child-care leave compulsory as well, as it is currently only a right that could be exercised and is not an obligation.

In addition, we need to be aware of the possibility that, when child-care leave becomes compulsory for both genders, there may be a statistical discrimination against married couples and/or couples who expect to have children. This could be another major problem for a country like Japan which needs to remove all the disincentives against family raising. Taking this into account, in order to put those who would like to have a family and those who do not on an equal footing basis, we should consider introducing an compulsory leave for all employees: it can be used to look after the children but it can also be used for investing in their human capital etc.

Another option is to introduce a child-care leave period where male workers can only take. It could be introduced in a way so that, if male workers do not take the leave, it will result in shortening the total child-care period that parents can take.

Statistical discrimination as we have seen can come up in other situations as well. For instance, there are countries in the world that requires males to be drafted for military service. In those countries, because of the possibility of males leaving the workplace for a certain period, males could face disadvantage in getting jobs or relied upon for important positions.

Statistical discrimination can also come up in countries like Thailand, where there is a culture where many of the males become Buddhist monks for a short period of time. It is interesting to see whether there is such an evidence.

The limited opportunities given to females to take part in the society is extremely low in Japan compared to other countries in the world. It is especially the case in the labor market. For example, the difference in labor force participation rates of females and males is one of the highest in the OECD countries (Figure 3). Therefore, it is important for Japan to improve the situation.

The direct cause may lie in statistical discrimination. But it is also important to acknowledge that fact that the traditional division of labor between genders casts a shadow over the reality in the Japanese society. The burden borne by females in raising children has led to the large gender difference in the ratio of those who have taken child-care leave in this country.

To make a breakthrough in the deep-rooted tradition, we may have to do more than a moral suasion: we may need to introduce some drastic change into the system. Starting the discussion about introducing compulsory child-care leave to male workers or introducing “daddy quotas” should provide a good start in that respect.