Tertiary Education in Japan: How it Looks Globally

When an economy is facing a decline in labor force, the only way it can grow is to raise labor productivity. In turn, in order to raise labor productivity, accumulation of human capital has to be an essential element. It is all the more so for Japan where she was able to enjoy a good reputation in this regard: Japan still ranks as one of the best in the world in terms of literacy proficiency.

However, the situation seems to have changed. This month’s column aims to survey the current state of human capital formation in Japan, with a special focus given to university and graduate school-level tertiary education.

One of the primary indicators of the importance of tertiary education for a country is the ratio of high school graduates who go on to enter universities. According to the School Basic Survey FY2014, the ratio has been rising in Japan to reach 51.5 percent in 2014. It means that more than half of high school graduates go to universities. It is the record highest in the history of Japan.

However, the important point to note is that the ratio is not that high if it is compared to those of other countries. For example, the OECD average of entry rate to tertiary education (which includes entry to graduate schools), according to OECD’s Education at a Glance 2014, is 58 percent for 2012 whereas the equivalent for Japan is 52 percent. As Figure 1 shows, the rates are higher in such countries as Germany, United Kingdom, and Korea. The efforts to accumulate human capital seem to have been stronger in those countries. 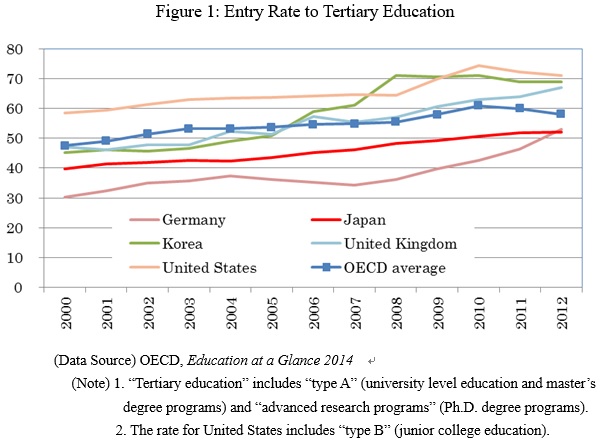 Another indicator which shows the importance of tertiary education is to see the number, not only of the freshmen, but of the total students who are currently attending junior colleges, universities, and graduate schools, normalized to take into account the difference in the size of the total population. The number per thousand persons for Japan is 23.5 in 2013. As figure 2 shows (which compares the number for the year 2010), this number is again lower than Germany, UK, and France; and is only almost a third of Korea, and a half of USA. 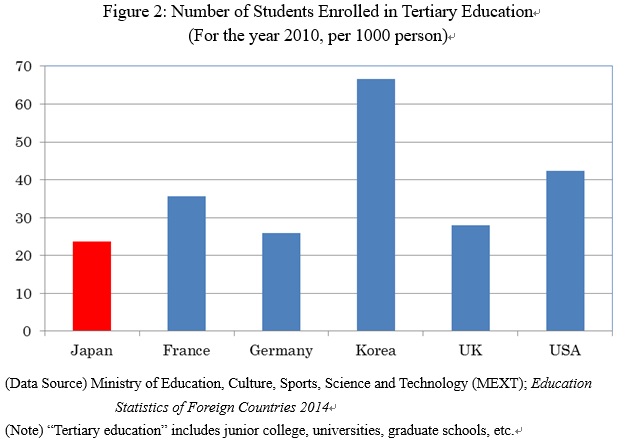 The result of the international comparison using this indicator may need some interpretation.

First, the number for Japan, whose population is aging, may be understated. That is because the total population, which is the denominator, in the case of Japan includes a large portion of aged people. Since the aged are less inclined to enroll as university students, the number tends to be lower.

Second, the number may also be low because, in addition to the low entry rate which was mentioned above, the number of adults who enroll as university students in the middle of their career is also very low in Japan.

For instance, those who enter universities or graduate schools at the age of 25 or above is only about 2 percent in Japan, while the OECD average is about 20 percent in mid-2000s (MEXT estimates). Also, 91 percent of Japanese university and graduate school students are full-time (i.e. only 9 percent are part-time students), while the OECD average of the share of full-time students are 79 percent (i.e. 21 percent are part-time students) (OECD, Education at a Glance 2014). A large part of the difference would be explained by the low enrollment of mid-career adults in Japan.

What we have seen so far were all “flow data”: corresponding to the investment in human capital. However, we can also look at the “stock data”: corresponding to the stock of accumulated human capital. In the current context, the indicator that is worthwhile looking at is the share of those who have finished university and graduate school education in the population. According to the Employment Status Survey 2012, for instance, the share for Japan is 21.4 percent of the population who are 15 years old or over.

An internationally comparable data provided by the OECD is the share of adults who have attained university and graduate school education. As Figure 3 shows, the share is higher, the younger the age group is. It reflects the rise in entry rate of universities in the recent years. However, since the entry rate for Japan is lower than other countries, as we have seen earlier, the share in the population of the age group 25-64 in Japan is lower than those in Korea, UK, and USA. 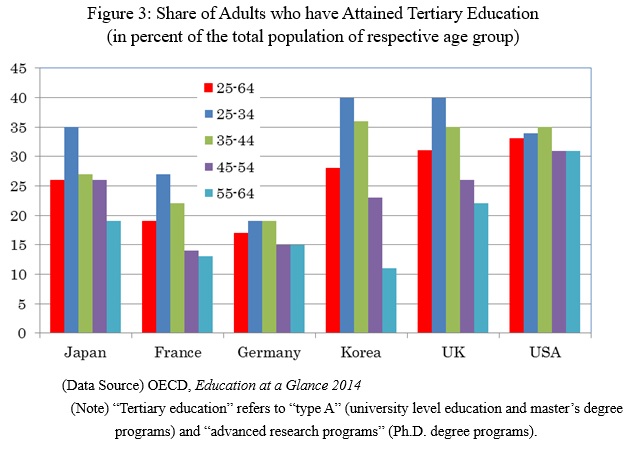 Lagging behind other countries

As we have seen, human capital accumulation in Japan, in terms of university and graduate school-level tertiary education, has improved when compared to the past. However, the pace has not been fast enough to keep up with the efforts made by other countries. In fact, the gap seems to have widened in the recent years: not only with regards the gap between Japan and the USA or the European countries, but also the gap between Japan and Korea. While we should take into account the quality of education that has been provided, the trends in quantitative terms as we have seen should be enough to persuade us to look more seriously into what is actually happening in Japanese tertiary education.

One thing to note before concluding is the fact that the situation would not differ much even if we narrow the focus of tertiary education to graduate schools (master and doctor courses). As Figure 4 shows, for example, the share of students enrolled in graduate schools is also much lower in Japan than in other countries. Since those who have finished graduate schools are the ones that would be at the center of management and innovation in the business sector, the situation in Japan may imply that we are also lagging behind in terms of enhancing the capability of technology development and other potential sources of raising total factor productivity. 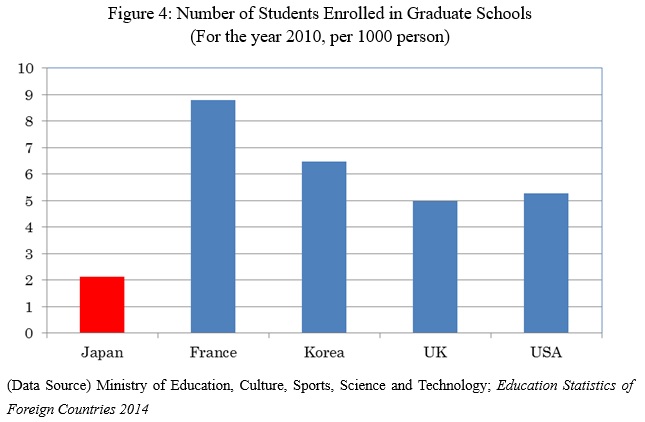