From the beginning of 2021, the increase in consumer price index (CPI) started to gain momentum in many countries around the globe. That is certainly the case for the United States where its central bank, the Federal Reserve, has started to tighten monetary policy by raising the policy rate. It is also the case for Japan where the headline CPI rate of change recorded 2.5 percent in April 2022, the highest since December 1991 if the impact of the consumption tax rate hike is excluded.

However, the CPI rate of increase in Japan is significantly lower than many of the other countries. In fact, as Figure 1 shows, Japan turns out to be the country with the lowest rate of change of CPI among the OECD member countries. 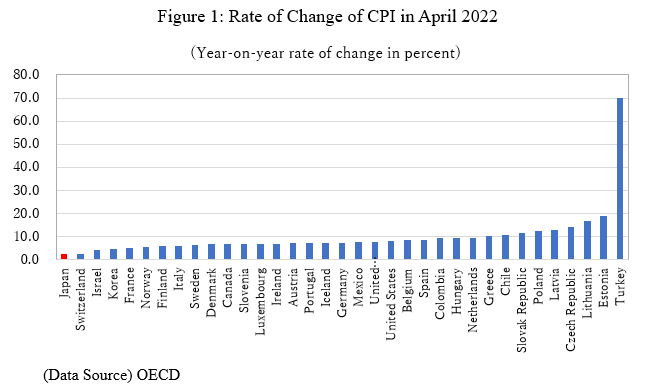 Japan has been affected, similarly to other countries, by the rise in prices of primary goods that resulted from the recovery of the global economy from the severe recession caused by the COCID-19 pandemic. In addition, it has also been affected by the depreciation of the yen since March this year which resulted from the tighter stance on monetary policy abroad.

In May 2022, as Figure 2 shows, Japan’s import price index recorded an increase by 43.3 percent compared to the previous year; of the increase, increase in prices in contract currency (which reflects the increase in primary goods prices) contributed to about 60 percent of the total rise, while the depreciation of the yen relative to the contract currencies contributed to about 40 percent. 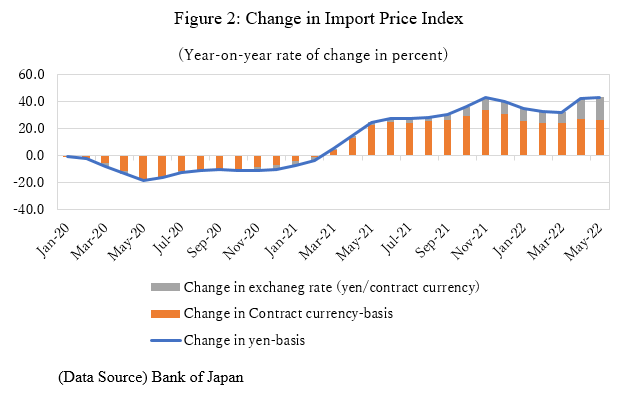 There are differences in price behavior among the goods and services 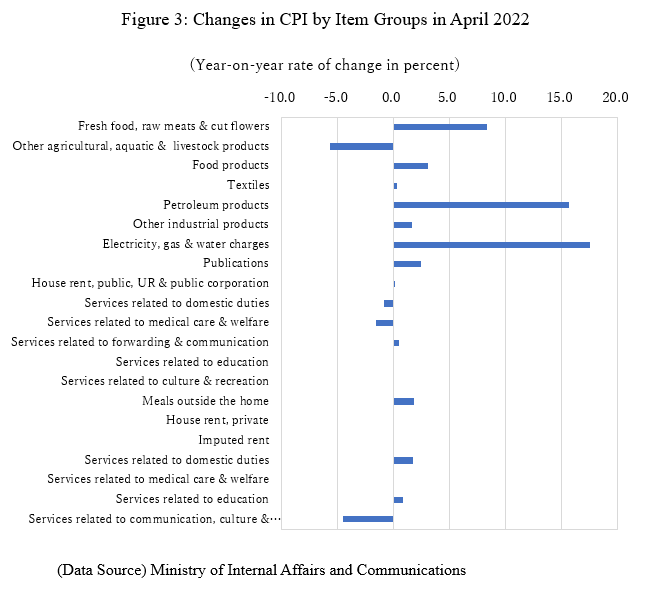 The increase in “electricity, gas, and water charges” reflects the fact that electricity and gas companies are authorized to automatically pass on the changes in prices of crude oil and natural gas to their retail prices: in other cases, they would have to submit a proposal to the ministry in charge for any increase in their charges. Electricity rate has reached the highest level in five years.

The “petroleum products” includes gasoline, propane-gas, and kerosene. Gasoline price, which is around 170 yen per liter in June, for instance, is the highest level since 2008. It should be noted that, even this level is lower than what it would be if not for the government’s policy to cap the price by subsidies paid to the oil-distributor when the price exceeded 170 yen. It is estimated that, without the subsidy program, the price would have been around 210 yen.

As for “fresh food, raw meats and cut flowers”, dependency on imports is significant. The share of imports in domestic demand for beef is 65 percent, for pork 51 percent, and for poultry 36 percent. In addition, dependence of animal feed on imports is about 75 percent of domestic demand (data are all for FY2019). These facts indicate that the prices of these goods are vulnerable to changes in import prices.

In contrast to these item groups, others are showing only a small increase or, in some, even a decline in prices (Figure 3). The reason behind the limited prices change is the sluggish recovery taking place in the Japanese economy which leaves a significant gap between the actual real GDP and the potential GDP. Figure 4 shows that the Japanese economy still has a negative output gap which is equivalent to 3.7 percent of potential GDP. It should be exerting a downward pressure on prices, and make it difficult for the producers of many of the goods and services to pass the rise in input prices onto their output prices.

The differences in price developments have introduced different impact on our daily lives. As we have seen, many of the goods and services that showed an increase in prices of a considerable magnitude, such as utilities, petroleum products, and food, are all necessities, while others, which only showed a limited change, are not.

The differences in the price behavior of the two different categories can be confirmed by Figure 5. It shows that “items classified as basic expenditures”, defined as goods and services which have price elasticity of less than one, has shown, since mid-2021, a steeper increase in rate of change in CPI than “items classified as selective expenditures”, defined as those with price elasticity equal to, or more than, one. 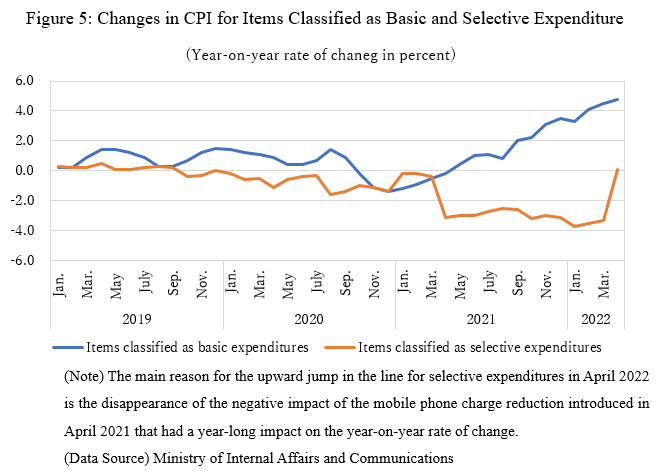 Figure 6 shows the different price changes faced by the households in different quantiles in terms of annual income of workers’ households. It confirms that, in the recent months, low-income earners (I) are facing higher prices changes than the high-income ones (V). 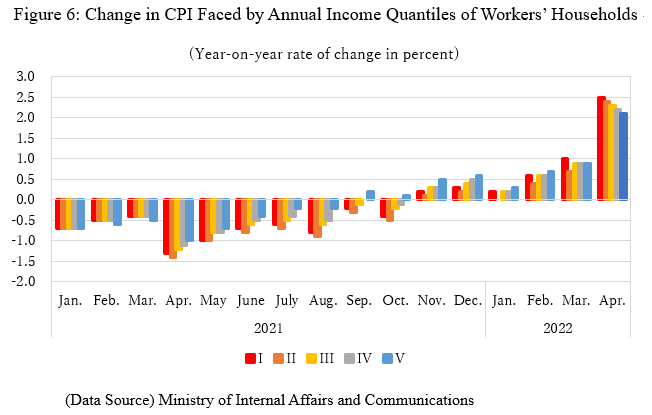 Policies to deal with the current situation

How should we deal with this kind of a situation?

On the one hand, we might be tempted to directly restrain price change. Or alternatively, we might try to alleviate the rise in prices by subsidizing the suppliers, as we are doing now.

However, such an intervention in the market mechanism will prevent the necessary adjustment that needs to be made. For instance, it will not lead to savings in the energy consumption which will reduce imports and also contribute to the reduction of fossil fuel that is required if we are to address the climate change as promised. In addition, the government would have to bear the cost of subsidies which might be difficult to recoup in the future.

On the other hand, we might be tempted to ask for a change in the stance of the monetary policy towards tightening.

However, this would put pressure on the economy which is still suffering from the slow recovery and the consequent negative output gap that still prevents the exit from deflationary environment. We need to bear in mind that our macroeconomic situation is different from those in other countries whose central banks have started to tighten their monetary policy.

The only way to overcome the current situation seems to be to strengthen the economy enough to be able to absorb the increase in prices. In order to achieve the objective, firms that are enjoying an increase in profitability due to the depreciation of the yen, or less affected by the increase in import prices, need to reward their employees with higher wage. If it is too late to reflect that in their response to the spring wage round, it should be reflected in their summer (and perhaps also winter) bonuses. It will not only help the employees facing higher prices to maintain their daily lives, but also would be the first step towards creating a virtuous cycle between distribution and growth that has been one of the policy objectives.

For the low-income households, including those who may be employees of firms that are not enjoying the positive impact of the depreciation and/or adversely affected by the higher import prices, government may need to provide direct transfer to these households to help them cope with the difficulties they face. While it requires fiscal resources, it should be more efficient than subsidizing the suppliers and prevent the prices to rise because it would be more focused to those who are in need.