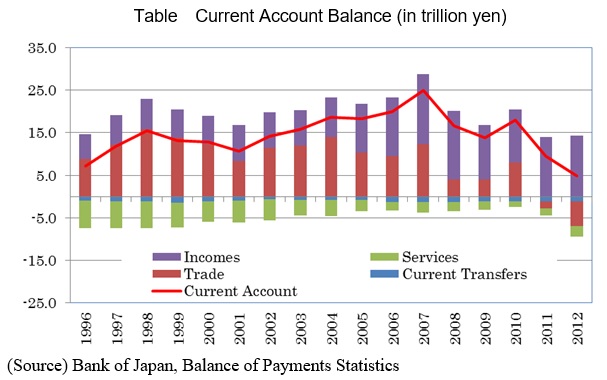 Standard scenario for the future of the current account balance

Current account deficit may seem inevitable. However, current account balance turning into deficit has some important implications. First, it will increase the role of foreign savings in the market, and may change the environment which, until now, allowed long-term interest rate to stay low. Second, it means that the nation is starting to run-down net foreign assets that have been accumulated in the past. The future of such a nation seems gloomy (although there is an important exception of the USA).

Alternative scenarios for the future of the current account balance

In trying to answer the question, a number of alternative scenarios can be listed (the following is based on my presentation at a seminar hosted by the Brookings Institution earlier this year (http://www.brookings.edu/events/2013/02/20-japan-economy). They are the scenarios that may allow Japan to maintain current account surplus in the medium-term. The scenarios are as follows:

Scenario A: Correction of the past overshooting of yen takes place. Stronger exports and weaker imports will make trade account to return to surplus.

Scenario B: Enhancement of product innovation improves the competitiveness of Japanese exports. It will reverse the trend in the trade account balance from deficit to surplus.

Scenario C: Enhancement of product innovation can also take place in services sector, thereby improving the competitiveness of the services sector and increasing service exports (one promising area is export of technology service). Surplus in trade and services account will be recovered.

Scenario D: Further increase in factor income receipts from abroad, which will more than offset the deficit in the trade and services account.

Scenario E: Expansion of output capacity of high-value added sectors by receiving more foreign workers. Being able to respond to demand for Japanese high-value added products, it will help in improving the trade account.

Necessary conditions for the scenarios to realize

Which of the alternative scenarios is going to realize, if any, depends on whether necessary conditions for the scenarios are met or not.

Scenario A can be said as being realized in the short-term since last December under Abenomics. While the recent trend in the exchange rate helps to correct the overshooting of the yen, sustained current account surplus and deflation will continue to provide upward pressure on yen. Moreover, emerging and developing economies will continue to challenge the competitiveness of our products.

For the scenarios B, and C to realize requires overhauling and renewal of Japanese national innovation system, which was once regarded as the best practice, but which became outdated as it failed to match the changes in the underlying condition (in terms of changes in demographics, severity of competitive environment, and the speed of technological innovation).

If the scenario D is to have impact on the domestic economy, income receipts from abroad (large portion being direct investment income) need to stimulate household spending. Households may respond to increase in direct investment income if they hold shares of the firms directly or indirectly (through mutual funds). At present, however, Japanese households holds majority of their financial assets in bank deposits and only a small portion in shares.

Consensus on whether to receive foreign workers in the area other than the skilled and the talented is not reached. Even if the consensus is reached so as to receive more unskilled foreign workers, the opportunity of realizing scenario E may be missed if Japan fails to make efforts to become an attractive destination for those workers by becoming more acceptable and by preparing necessary infrastructure.

Discussion above shows that the realization of alternative scenarios can be achieved only if the economic policies are successful in addressing the respective challenges. If any of the alternative scenarios is going to be pursued, there is no time to waste but to identify the necessary polices and include them in the growth strategy package.

Issues from a wider perspective

The reality of the alternative scenarios can also be discussed from a wider perspective. In particular, two points are worth mentioning in this context.

Second, current account deficit is considered to be inevitable due to the fall in household saving rate that accompanies aging of the population. If the current account surplus is going to be persistence irrespective of the aging, the surplus has to be explained by offsetting changes in net lending and net borrowing of other sectors. Whether the changes are realistic, and, if so, what are the conditions for them to be realistic are important issue that remain to be considered.

These points imply that maintaining current account surplus in Japan is not only an important policy issue, but also an interesting theoretical one.