Back to List
Empty Mind after Ten Thousand Reasons

The Future of the Japanese Economy: The Great Convergence and Two Great Unwindings

Since bottoming out in November 2012, the Japanese economy has been in an expansionary phase that reached its 58th month in September of this year. Although not yet as long as the economic expansion achieved during the Koizumi reforms (73 months), the current phase exceeded the mark set by the Izanagi boom of the late 1960s (57 months). While this phase is technically termed expansionary, it lacks strength. In contrast to the average growth rate of 1.8% seen during the Koizumi reforms, the average rate in the ongoing expansion has only been about 1%.

The economic strategy underlying Abenomics is to put the Japanese economy on the road to 2% growth. The experiences of the Koizumi reforms demonstrate that it is quite possible to realize 2% growth by implementing an effective growth strategy. This is evidenced by the theory of convergence through technology diffusion. The catch-up attained by China, India and other emerging countries since the 1990s through offshoring and the construction of global value chains has been astounding. Professor Richard Baldwin argues that the start of the Industrial Revolution ushered in an era of Great Divergence for the global economy via technological innovation and capital accumulation in the developed countries and elsewhere, and that from the 1990s we have been in an age of Great Convergence due to rapid drops in information and telecommunications costs.

In contrast to the brisk development enjoyed by emerging countries, Japan has found itself in a two-decade-long period of stagnation, its economy falling far below the convergence line predicted by Convergence Theory. If it is possible to apply Convergence Theory to Japan as well, then Japan could be expected to return to this convergence line. At a meeting of the Committee for Japan’s Future in which I participated, I argued that, given the risk of declines in per capita real consumption and living standards due to a rapidly aging population and dwindling fertility rates, it would be preferable to reach the convergence line as soon as possible and thereafter grow along this line (Figure 1). 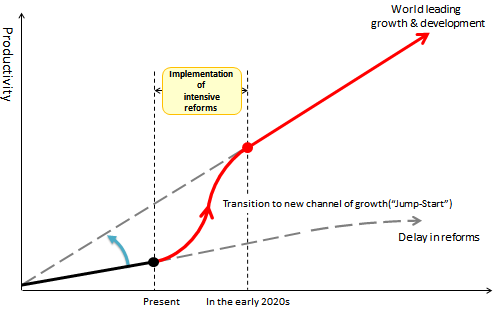 Taking advantage of ICT innovations will be essential for realizing this scenario. Japan already failed to boost its productivity during the 1st IT Revolution of the mid-1990s, and it is now in the 2nd IT Revolution, otherwise known as the 4th Industrial Revolution, centered on IoT, AI, and Big Data. OECD research shows that the top 5% frontier companies have not seen a decline in productivity growth since the financial crisis. Other companies lag behind these frontier companies in globalizing and using digital technology (digitalization), which has only widened the productivity gap between them. Were all companies in Japan able to boost their performance on par with the top ten companies utilizing AI and IoT, Japan’s growth rate could be accelerated by 4% (JCER 2017).

There are two obstacles to this growth acceleration scenario. The first is the “Great Unwinding” of the Federal Reserve Board’s quantitative easing policy to reduce its balance sheet. A tighter US monetary policy would weaken the Japanese yen, seemingly favoring the Bank of Japan’s efforts to attain its 2% inflation target. However, real housing prices in developed countries have already reached dangerous level, which is comparable to the pre-global crisis level (Figure 2). The European Central Bank also intends to announce a plan to lessen its own quantitative easing in the autumn. “Great Unwindings” by two key central banks pose the risk of triggering sharp drops in overvalued asset prices.

The second obstacle is the “Great Unwinding” by President Trump from the liberal international economic order formed in the post-war period under US leadership. The White House is considering the imposition of anti-dumping taxes and import restrictions in accordance with Article 232 of the Trade Expansion Act of 1962, justifying these measures out of security concerns for supplies of steel, aluminum and other products. Security-driven protectionist trade measures will make it difficult to resolve disputes at the WTO and increase the risk of a trade war.

Note: Grey areas represent the number of countries identified as being in a severe recession (from peak to trough). The global real house price index is constructed as a GDP-weighted average across OECD countries measured in deviation from trend. Source: Hermansen, M. and O. Röhn (2017), “Economic Resilience: The Usefulness of Early Warning Indicators in OECD Countries”, OECD Journal: Economic Studies, Vol. 2016, OECD Publishing. Iwata, K., Jean S., Kastrop, C., Loewald, C., and Véron, N., “Policy Note on Resilience and Inclusive Growth”, May 24, 2017.The data has been updated from originals.