The Importance of “Base-Ups” for Abenomics

As the new fiscal year approaches, whether “base-ups” are going to take place or not is attracting great attention in the policy arena. “Base-up”, in this context, mean the upward slide of wage scales that firms apply to their employees. It is said that whether “base-ups” are going to take place is the key for the virtuous cycle between wages and consumption to start operating.

The three components of Japanese wages

First is the basic pay component that employees receive for their work during regular working hours. It is a fixed amount that is determined by the wage scale that reflects such factors as the employee’s education level, age, seniority, job classification, and skill.

Second is the overtime pay component that employees receive for their work during overtime working hours. Its wage rate depends on the basic pay, and by the time zone that overtime work takes place. Overtime pay is strongly influenced by the fluctuation in industrial production.

Third is the special pay component. It mainly consists of bonus payments that employees receive for their contribution in the firm’s profits. The payment is usually made twice a year, in June and December. It fluctuates in line with the firm’s profits, albeit with a lag. Since bonus depends on firm’s profits which take time to be known, it follows profits with a lag.

For the large firms, negotiation on wages takes place between the employers and employees in spring (the “Spring Round”). The result is reflected in the basic pay and overtime pay in the new fiscal year. In about half of the cases, bonus payments for the following June and December are also determined at this occasion.

Wages has long been stagnant, but since the introduction of Abenomics they have shown changes. During CY2013, it gradually gained momentum (Figure 1). For CY2013 as a whole, total wages per worker stopped falling in CY2013 (stood the same as the previous year) for the first time in three years However, details of the increase reveal some special features. 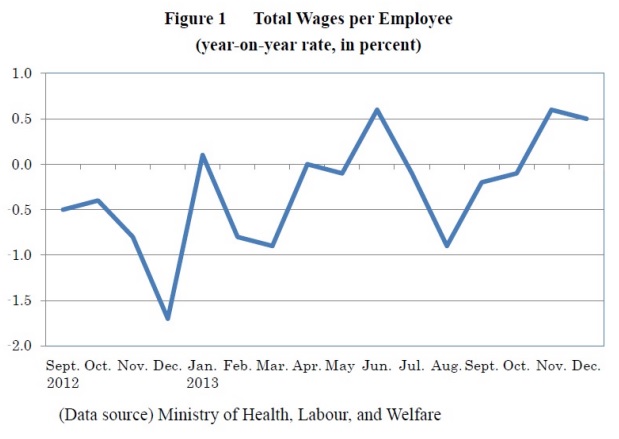 The increase in total wages has come from increase in overtime and bonus payments (Figures 2 and 3). The former has increased by 1.8 percent in CY2013 over the previous year, and the latter by 2.1 percent. They reflect the pick-up of the economy that has resulted in increase in industrial production, and improvement in profits during 2013, thanks to Abenomics. 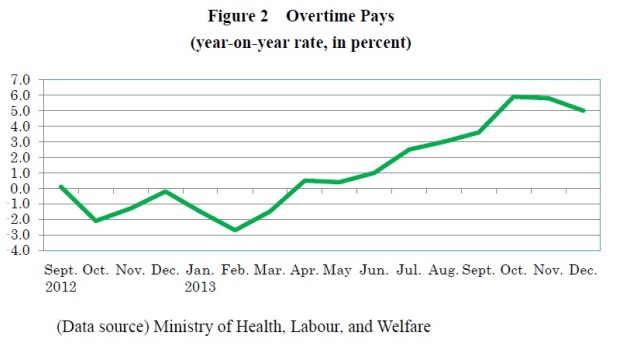 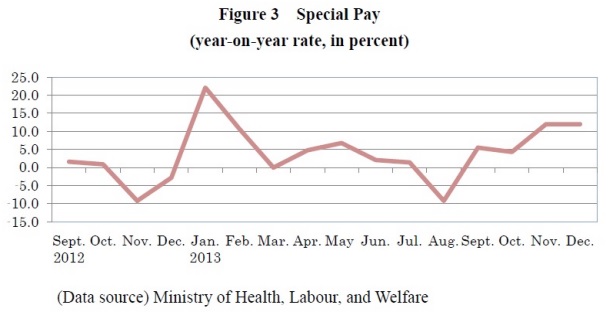 In contrast, basic pay has not shown any increase. In fact, it has continued to decline in 2013 (Figure 4). The decline is due to the constant basic pay for the regular workers, and increase in the share of non-regular workers in the workforce. Non-regular workers, such as part-tem and contract workers who are hired by relatively low wages, now account for more than a third of the total workforce (37.6 percent in January 2014). 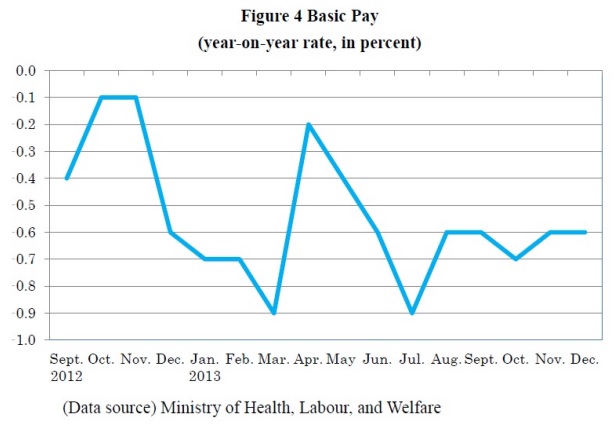 Importance of increase in basic wages

While total wage payments have increased, the fact that it does not come from increase in basic pay has an important implications for the domestic demand, private consumption in particular.

It is partly because basic pay, after all, has a share of 77 percent in CY2013 (Figure 5). In contrast, overtime and bonus payment commands only about 6 percent and 17 percent, respectively. What happens to basic pay, therefore, matters most in terms of the changes of overall wages. 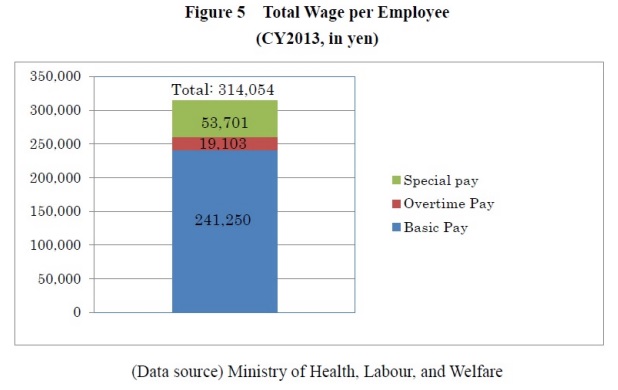 In addition, if we refer to the permanent income hypothesis, it is the increase in permanent income, rather than transitory income, that has a larger impact on consumption. Since overtime and bonus pays are transitory in nature, meaning they may fall in the next downturn of the economy, the impact on private consumption should be limited. For a more sustainable increase in private consumption, we need a rise in the basic pay, or the “base-ups,” in the current spring round.

Good news and some reservations

It is reported that some of the large firms are showing signs of raising basic pay for the first time in many years. It is certainly a good news for the economy. However, a few reservations need to be made.

First, increasing number of households are aged whose income depend on pensions rather than wages. Therefore, increasing portion of private consumption is becoming less responsive to wage increases (the share of consumption by households headed by a person who is older than 65 is estimated to have risen to about a third of the total consumption in 2012).

Cornerstone of the Abenomics

Nevertheless if the increase in base-ups takes place, it will be a significant break from the past reluctance of the firms in increasing wage costs. The responses of the largest firms to the requests made by their trade unions are expected to be made at around March 12th. It will be an occasion where we can actually witness how much of the firms’ perception about the future of the economy has changed by Abenomics.