Aging and the sustainability of the Japanese pension system

The Abridged Life Table for 2013 was published by the Ministry of Health, Labour and Welfare in July 31st. According to the Table, the average life expectancy for a Japanese has extended further: male reaching 80 for the first time in history at 80.21, and female extending the world longest to 86.61 (Fig.1). Undoubtedly, it should be congratulated as an evidence of victory of civilization over famine and illness. 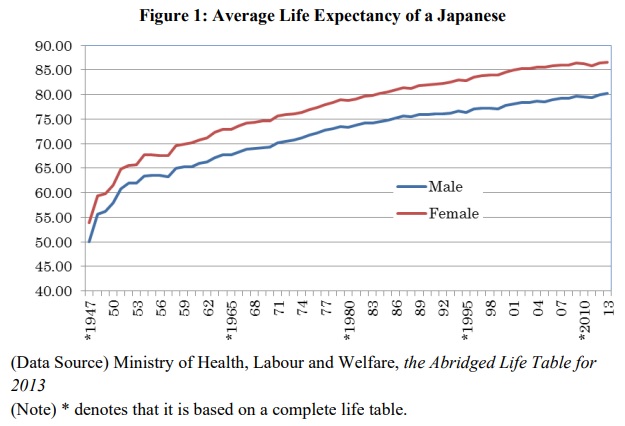 However, in terms of its implications on social security, it is a factor that makes its sustainability more difficult. It has long been anticipated that decline and aging of the population would undermine the sustainability of our pension system. It was feared that the day may come when the commitment to pay pension cannot be met. The fear is becoming more of a reality as the accumulated assets held by the pension system are now being run down in order to balance the receipts and the payments of the system: the amount of assets have been falling since 2001 (Fig.2). 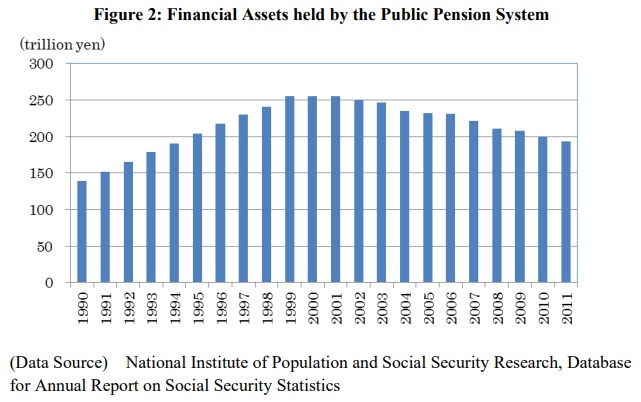 In order to check its sustainability and to trigger an action whenever necessary, a periodical check of the financial status of the pension system was introduced as a part of the Pension Reform of 2004. Every five years, the government is required to assess whether the replacement rate will be no less than 50 percent (i.e. standard household’s pension benefit received when it first becomes eligible to exceed 50 percent of the average wage level at the time). In the case it becomes evident that the replacement rate cannot maintain 50 percent while leaving at least a year’s expenditure worth of financial assets at the end of the 100-years period, necessary actions is to be taken to review the system.

The result of the Financial Verification of 2014 (called Zaisei-Kensho in Japanese) was published in June 3. The column for this month will discuss the results and its implications.

The Findings of the Financial Verification of 2014

In order to assess the financial sustainability, basic projections were made for eight cases (from case A through H) that differed by their economic situations. Additional projections were also made in order to make clear the implications of a number of policy options. The main points of the projections can be summarized as follows: First, they show that economic policies, particularly growth strategies, and their impacts are vital in maintaining the minimum replacement rate. The cases where the replacement rates are able to maintain 50 percent or above (from case A through E) turned out to be those which assumed that (a) the total factor productivity growth will be relatively high (i.e. at least 1 percent or more in the long-term), and that (b) the labor participation rate of the females and the aged will rise significantly so that, for instance, the M-shaped curve of female labor participation rate will disappear.

In other non-favorable cases (from case F through H), minimum replacement rate of 50 percent cannot be maintained if the minimum level of assets (i.e. a level equivalent to a year’s expenditure) needs to be kept at the end of the 100-years period.

Second, the result of the projection depends much on the assumption about the fertility rate, which is assumed to converge to 1.35 in the long-run. In the low fertility rate cases also provided in the Verification, which assume the rate to converge to 1.12 in the long-run, even for the most favorable case (case A) the replacement rate would be less than 50 percent (Fig.3). 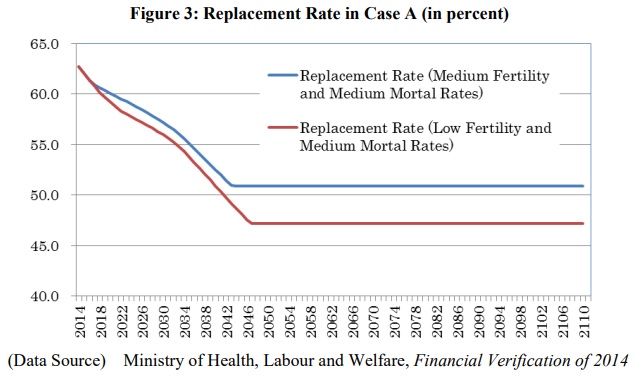 Third, it also shows that implementation of pension reforms will make a difference. Even in the cases where economic situation is not favorable (from case F through H), replacement rate improves if certain policy options are implemented; such as (a) applying the “macroeconomic slide” system unconditionally (currently it ceases to be applied if the application implies reduction of benefits in nominal terms); (b) widening the coverage of the public pension system to small businesses and part-time workers; and (c) working and paying premiums for longer years and deferring receipt of benefits until later years.

Implications on sustainability and poverty

Economists seem to agree that the assumptions regarding the implementation of growth strategies and their impacts are too optimistic. They also assert that the assumption regarding the rate of return on financial assets is too optimistic. Consequently, they argue for the discussion on the reform of the pension system to be based on more prudent cases (i.e. from case F through H).

In addition to the above, the following is worth commenting.

First, it should be noted that, even when we are able to maintain the replacement rate to be no less that 50 percent while meeting the required minimum level of financial assets of the pension system, it does not mean that the system is sustainable. The results suggest that, even in the most favorable case A, since receipts and payments do not meet, the financial assets can be expected to be depleted within years after the end of the 100-years period (Fig.4). Passing the criteria for the Verification does not mean that sustainability is assured. 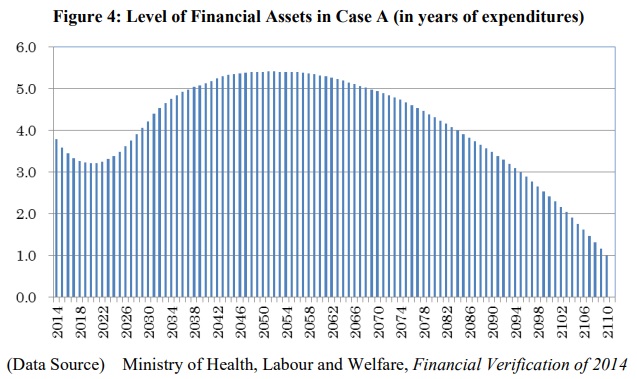 Second, it should also be noted that, even in the cases where replacement rate stays no less than 50 percent, it may not assure decent living for the pensioners. For instance, comparing the level of pension benefit (basic pension plus earnings-related pension) under case E with the government’s criteria of the guaranteed minimum standard of living (at October 2013), benefit level is not that high. It is especially the case if we focus on the basic pensions, which will be the only pension that the self-employed will receive, particularly when the pensioners live in big cities and need to pay for their housing. 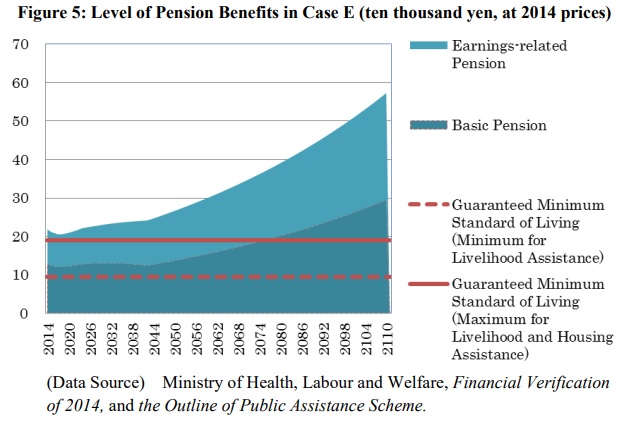 Issue of poverty is an important element in designing pension system. Although in a different context, warning has been made by the OECD in its Pensions at a Glance 2013. It stated as follows:
- “Pension replacement rates of future retirees in Japan will be low in OECD comparison.”
- “Retirement-income adequacy may thus be an issue also for future cohorts of older people. Currently, 19.4% of the over-65s is at risk of poverty, relative to 12.8% on average in the OECD.”
While too high a replacement rate may deter incentives to work, too low a rate would incur higher risk of falling into poverty.

Immediate reform to be made

As for the options to reform the current pension system, many economists argue for the macroeconomic slide system to be applied unconditionally, even in cases where it results in reduction of benefits in nominal terms. Another option that is attracting support is the raising of the eligibility age for receiving pension benefits.

Raising the eligibility age seems to have a large impact, according to the projection provided in the Verification. It is an option that should be given a serious consideration to be implemented in the near future.

This is not only because it has long been advocated by international organizations such as the OECD and IMF nor because other OECD countries are already moving into that direction, but also that there are developments in Japan that more supportive of the raise than in other countries: the average employment rate of those aged 60-64 and 65-69 are 58.9 percent (72.2 percent for males and 46.0 percent for females) and 38.7 percent (48.8 percent for males and 29.3 percent for females), respectively. Combined with polices to encourage further employment of the aged, the raise should be more feasible than other OECD countries which have much lower rates.