The Latest Population Projection for Japan

A new Population Projection for Japan released in April

The National Institute of Population and Social Security Research (IPSS) released its latest long-term population projection for Japan on April 10th. It is the updated version of the projection which was last published in January 2012. It is an important publication not only because it is the most respected projection produced with a significant input of resources available to the national institution, but also because it is going to be the basis on which the review of national pension plan, which is expected to take place in 2019, will be made.

The population projection of 2017 has its upsides and downsides.

The upsides of the Population Projection

The increase in fertility rate has led to a downward revision of the share of aged over 65 in total population, notwithstanding the longer life expectancy during the projection peirod.

The life expectancy of the elderly in Japan is extending: the latest figure for 2015 is 87.05 for females and 80.7 for males. The long-term life expectancy in 2065 is assumed to extend further to 91.35 for females and 84.95 for males in the latest projection, both being an upward revision from 90.93 and 84.29, respectively, for 2060 in the previous projection. It means that the number of the elderly aged 65 years old and over will be revised upwards; it is expected to increase to 35,403 thousand in the latest projection from 34,642 thousand in the previous one.

However, since more younger children is expected because of the rise in fertility rate, the share of the elderly (65 and over) in the total population is expected to fall to 38.1 percent compared to the previous figure of 39.9 percent.

The downsides of the Population Projection

On the other hand, the downside of the latest projection is that the decline in the population is still projected to continue. During the 50 years’ period starting from 2015, the latest projection expects that the total population of Japan will fall from 127,095 thousand in 2015 to 88,077 thousand in 2065, a decline by 30.7 percent. The annual rate of decline during the period is estimated to be 0.7 percent.

If we add the projection from reference scenario that extends the projection to 2115 by assuming fixed fertility and mortality rates after 2066, the population is expected to decline further to 50,555 thousand in 2115, a population that is only 39.8 percent of the total population in 2015 (Figure 1). The annual rate of decline between 2065 and 2115 is 1.1 percent. 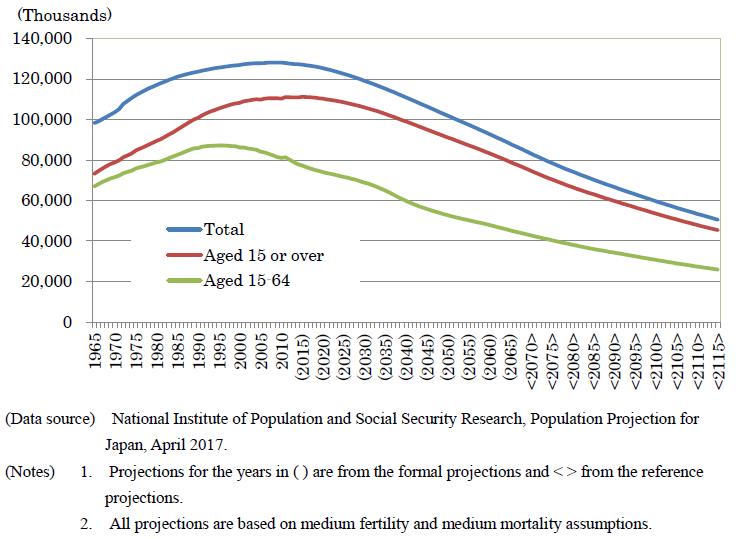 It is projected that, not only the young (under the age of 15) and the matured (from 15 to 64 years of age, traditionally known as the “working-age population”), but also the elderly (65 and over) is expected to decline. After reaching the peak in 2042, the number of the elderly is expected to decline thereafter. With the declining total population as its background, it leads to the stabilization of the share of the elderly in the total population at around 38 percent in mid-2050s.

It implies that a huge burden is going to fall on the matured in term of sustaining the social security system. The old-aged dependency ratio, or the ratio of the numbers of elderly to the matured which roughly corresponds to the ratio of the number of those receiving pensions to the number of those paying premiums, is projected to rise from 43.8 percent in 2015 to 70 percent in 2061, and reach 74.6 percent in 2065 (Figure 2). The reference projection further shows that it will rise gradually to 75.0 percent in 2115. It implies that a pensioner who is supported by 2.3 premium payers in 2015 will have to be supported by 1.3 premium payers in the long-term.

Figure 2: Dependency Ratio of the Elderly to the Matured 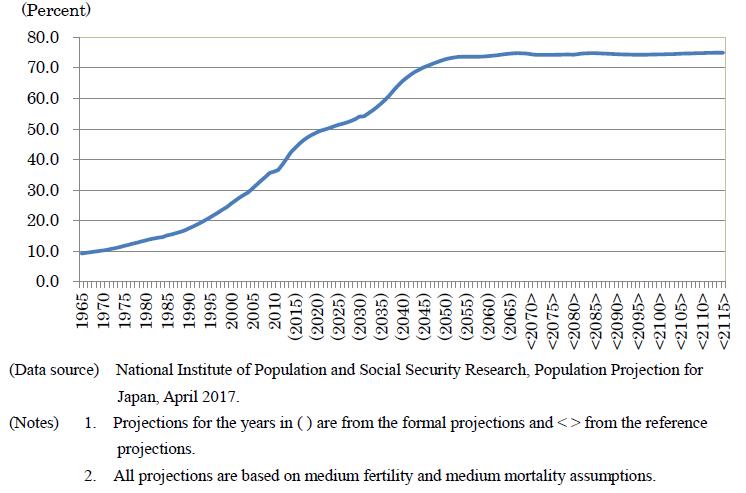 The new projection that shows the continuation of the declining trend of population leaves us with uneasiness. With less available labor input, it would be a drag on the potential growth rate that is already below 1 percent (0.8 percent according to the Cabinet Office). The downward pressure would be reinforced by the lower available capital input that results from the lower savings rate due to aging. Unless total factor productivity sufficiently rises to offset these negative factors, the potential growth rate can be as low as zero or even negative in the long-term.

The further rise in fertility rate is obviously the most fundamental solution to the situation. It is unarguably not an easy task to achieve because, in order to raise the low fertility rate in this country, marriage rate has to improve: it is essential since about 97 percent of the children born in Japan are to formally married couples.

The problem is more serious if we take into account the inertia in population dynamics. As the auxiliary simulation results to the population projection of 2017 shows, even if Japan succeeds in raising the fertility rate to 2.2 towards the 2020s, the population will still continue to decline until the 2070s.

We will have to seek a solution to deal with the long-term downward pressure on potential growth which is expected to be with us even when more optimistic scenarios realize.