The 2015 Annual Report on the System of National Accounts was released by the Cabinet Office on 25 December 2014. One of the striking facts revealed by the Report, which made available SNA figures on flow series up to 2013, was that the savings rate of Japanese household had turned negative in 2013.

The Japanese household savings rate has been falling since mid-1970s when it reached the peak of more than 23 percent. As Figure 1 shows, it almost fell below zero in late 2000s before it was temporarily overturned by the global financial and economic crisis. However, the declining tend resumed in 2010 and fell to -1.3 percent in FY2013 (-0.2 percent in CY2013). It is the first time in the history of modern SNA in Japan, which can be traced back at least to 1955, that household savings rate in Japan turned negative. It is a significant change from the times when analyzing the reasons why Japanese savings rate was so high was a subject of numerous academic papers. 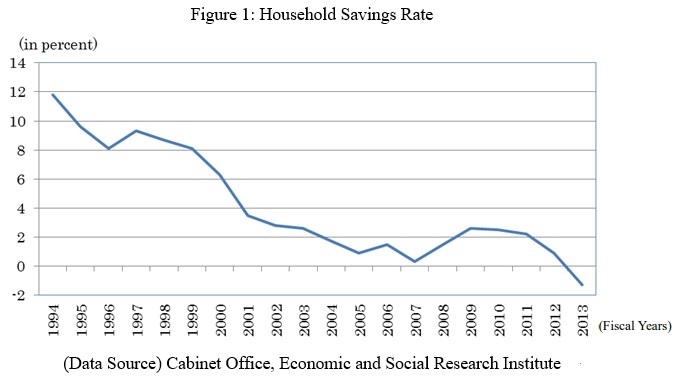 The factor behind the negative savings rate: the aging of the population

One of the factors behind the negative savings rate is, of course, the aging of the population in Japan. Supporting evidence can be found in the data provided by the Family Income and Expenditure Survey, which collects data on revenue and spending from about 9000 households every month.

For example, average propensity to consume (APC) of households whose heads are workers can be obtained, including those for the households grouped by the age of their household heads. As Figure 2 shows, APC rises as the household head gets older. It reflects the fact that, while incomes of households reach their peak when their household heads are in their 40s and 50s and falls significantly in their 60s, expenditures in 60s and 70s falls less significantly. It seems to be consistent with the life cycle-permanent income hypothesis which predicts that consumption is more stable than income. 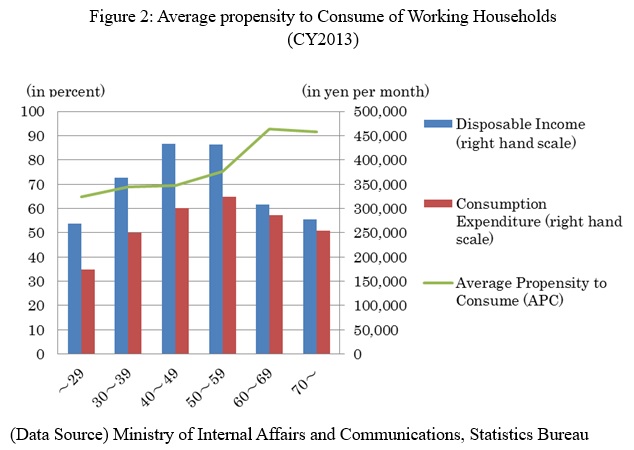 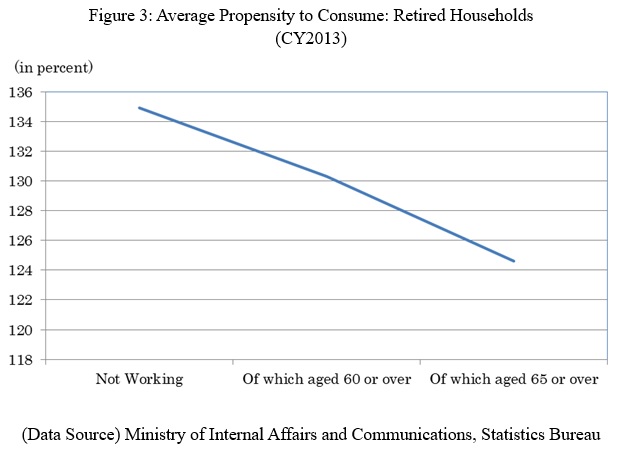 (c)Share of aged households is increasing

Should be mindful of the drastic shifts it may bring

Since aging of the population is still expected to continue for a long period of time (e.g. old-aged dependency ratio is expected to keep rising until the 2070s), the negative savings rate is also expected to be with us for a long time. In this sense, 2013 should be remembered as the year opening up a new era of negative household savings rate, which Japan has never experienced in the past.

The new development may have implications on a wide range of aspects of the Japanese economy: One important area that may see a drastic change is the external balance. Another of the striking facts revealed by the 2015 SNA Annual Report is that, as Figure 5 shows, the net borrowing of the external sector (roughly equivalent to the current account surplus with a reversed sign) had become almost zero in 2013; i.e. -0.1 percent of GDP in FY2013 (or -0.5 percent of GDP in CY2013). 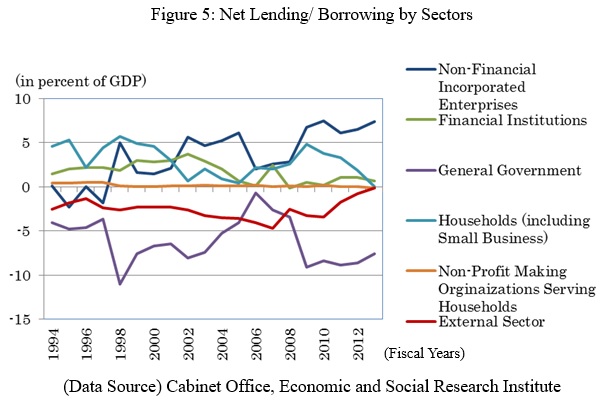 Since household savings had been the most important factor behind the large current account surplus recorded in the past, negative savings rate should have influenced the reduction in the current account surplus. If that is the case, current account balance may also have entered a new era of a negative balance. It would mean a drastic change in the external relationship of the Japanese economy. We should be mindful of the changes that it may invite. In particular, what should be kept in mind is the larger dependence on foreign savings: It may bring a change to the relatively stable financial environment Japanese government debt were able to enjoy until now.