This month’s column will discuss what measures should be taken into account when identifying the concrete measures. It will be done by examining the three most obvious ways to achieve such targets; namely (a) raising economic growth, (b) restraining government expenditures, and (c) raising tax rates. It should be noted that, in doing so, I would be talking about them in terms of ratios to GDP, and on the consolidated governments basis (central plus local governments, referred to as “governments” in what follows), which are in accordance with the targets set by the Government.

However, that does not mean that higher growth rate will not help in any way. In fact it does, but it helps through providing favorable environment for fiscal consolidation in the following ways.

First, it will help the economy in absorbing the negative impact of fiscal consolidation measures such as expenditure restraints and tax rate hikes. A Growing economy is much easier to adjust than a shrinking one.

Second, it will help the financial situation of the social security funds, which would, in turn, weaken the pressure on the governments to provide assistance to the funds. I will elaborate more on this aspect in the next section.

Another of the most obvious ways to achieve fiscal consolidation targets is to restrain government expenditures, both in discretionary items and mandatory items.

In the discretionary expenditure items (e.g. public works), the restraint can be made by the discretion of the governments. It does not mean, of course, that it can be easily done. Probable resistance from the vested interest may turn out to be hard to overcome. Nevertheless, it does mean that it could be done without having a new legislation approved by the Diet.

What is more difficult is the restraint in mandatory expenditure items, such as the current transfers to finance social security funds. That is because they are directly related to the daily lives of the people and because they cannot be controlled unless a new legislation is enacted.

Current transfers from the government to social security funds are required to finance benefits that are paid by the social security funds but which exceed the incomes and the running-down of financial assets of the funds. They are growing rapidly and currently are more than 32 trillion yen, as Figure 1 shows. 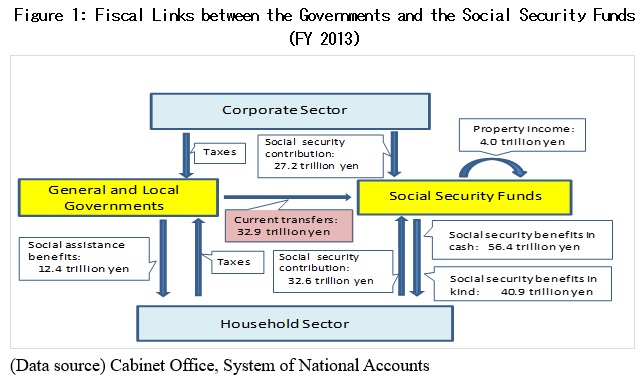 With the view of restraining governments’ current transfers to the social security funds even with these difficulties, a number of points need to be taken into consideration.

First, social security funds are subject to strong pressure to pay more social security benefits because of the aging of the population and the extending longevity. Increasingly more number of aged people are becoming eligible to receive pensions and for a longer period of time.

Second, social security benefits tend to increase along with the growth of nominal GDP per worker, albeit at a lower rate. That is because, pensions are indexed to nominal wages (for those who have become eligible for the first time) and to prices (for those who are already receiving them). As for the government-set prices for health care and long-term care services, they tend to reflect changes in wages (e.g. with respect to payments for doctors and nurses) and prices (e.g. medicines and materials for medical treatment). Improvements in medical technology, on the other hand, tend to raise benefits more rapidly than the per worker GDP growth rate.

Third, social security contributions, on the other hand, only increase at a modest rate. That is because, while contributions by each person tend to increases along with their nominal wages, the number of working age people who pays the contributions is shrinking.

As a result, the financial situation of the social security funds has deteriorated, and will continue to deteriorate in the medium-term as well, in view of the increase in population of the aged, the extension of longevity, and the decline in population of the working young. While it has been running down financial assets that have been accumulated in the past, it would still have to rely much on the current transfers from the governments.

-Improving the financing of the social security funds

In response to the financial deterioration of the social security funds, pension reform of 2004 introduced a number of bold initiatives.

One was the introduction of a scheduled increase in pension premiums that is expected to take place annually until 2017.

The other is the introduction of the macroeconomic slide mechanism, which allows the pension benefits to be cut according to the negative impact coming from aging and longevity extension. Despite its introduction, actual implementation has been suspended because of deflation in view of the need to avoid cuts in pension benefits in nominal terms. Since inflation rate has turned positive, it will now be applied for the first time to the pension benefits received after April 2015: Pension benefits after price indexation is expected to be cut by an adjustment rate of 0.9 percent.

The positive consequence of the 2004 pension reform is that, as Figure 2 shows, benefits paid by the pension system is now under control so that pension benefits to GDP ratio is expected to stabilize, and even to decline in the medium-term. 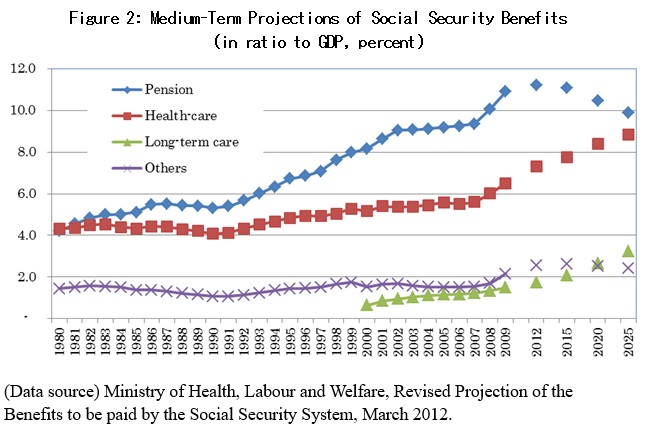 On the other hand, problems remain in the health care and long-term care systems. Since no mechanism equivalent to that of the macroeconomic slide system has been introduced, benefits paid by the two systems are still expected to expand, becoming the main reason for requiring more current transfers from the governments.

Unless some measures are introduced in this respect, government expenditures will continue to expand in the area of social security. The basic measures that should be explored in this respects are; (a) reviewing the coverage of health care and long-term care system (e.g. exempting minor services); (b) restructuring and reforming the government-determined prices for health care and long-term care services (e.g. introducing packaged-paid services); (c) increasing premiums and over-the-counter payments for the services (e.g. increasing payments from high-income earners); and (c) increasing working age population (e.g. encouraging immigration).

The third most obvious way to achieve the fiscal coordination targets is to raise tax rates. The problem is in choosing which tax to raise its rate. Since corporate tax rate is aiming towards lower rates in order to encourage more corporate activities, it cannot be the choice. Personal income tax applies mainly to those who earn wage income. Thus, it would inevitably fall on the working aged employees, only to worsen the intra-generational inequality. Therefore, it would leave only the consumption tax as a candidate to raise its tax rate.

In fact, consumption tax is preferable as a candidate in a number of respects.

First, the tax burden falls equally on the aged as well on the young. It will alleviate somewhat the already heavy burden that has been left for the future generation to bore.

Second, the rate in Japan at 8 percent (or 10 after April 2017) is lower than the VAT rate in other countries. For instance, minimum requirement rate in EU is 15 percent, and countries like Sweden and Denmark have a rate of 25 percent.

Third, while the consumption tax revenues are expected to be earmarked for use in social security purposes, and a part of it will be used to finance new arrangements to be introduced, the part that is used to finance existing system will release other revenues to be used in other areas, thereby contributing to fiscal contribution.

The last hurdle to overcome

What the government will announce as the specific measures to achieve fiscal consolidation by this summer is expected to be a combination of the three ways that has been taken up above. And probably the concrete measures would be included after taking due account of the points that has also been made above.

f the measures announced are appropriate, the remaining problem is its implementation, especially those which requires legislation. Since any measure of fiscal consolidation in the current context implies more burdens on the current generation, especially the aged, relative to the future generation, a hurdle to overcome is the “silver democracy”, or the dominance of the aged in voting.

Without a new arrangement, such as introduction of retirement age for voting rights, or weighted treatment of votes by the young, what needs to be relied on is the fair and rational consideration of the future generation by the aged.