To Enhance the Credibility of the QQE

Two years have elapsed since the implementation of the Quantitative and Qualitative Monetary Easing (QQE) by the Bank of Japan (BOJ) in April 2013. During the spell of two years, we have witnessed some positive achievements in terms of the fight against deflation. In particular, prices no longer continues to fall, and expectations for an increase in prices has emerged. However, the two year experience has also revealed some issues that need to be addressed if the credibility of the monetary policy is to be enhanced. The following three are the issues that seem important in this respect.

First is on how the framework for the inflation targeting is set.

Current commitment of the BOJ is as follows: “The Bank will achieve the price stability target of 2 percent in terms of the year-on-year rate of change in the consumer price index (CPI) at the earliest possible time, with a time horizon of about two years”. Essentially, what it means is that the BOJ has committed in both the inflation rate target (2 percent inflation rate in headline CPI) and the time frame for its achievement (about two years). 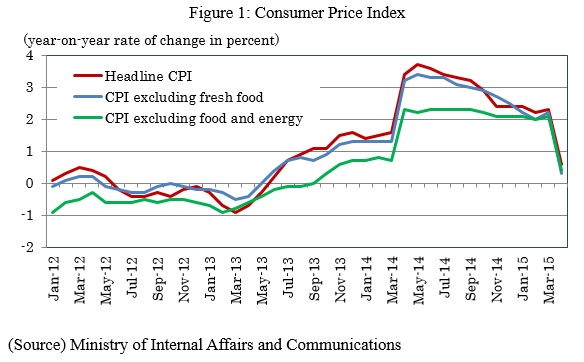 In light of this development, the BOJ announced the expansion of the QQE in October 2014. According to the BOJ’s announcement, at the background of the action was the fact that “somewhat weak developments in demand following the consumption tax hike and a substantial decline in crude oil prices have been exerting downward pressure recently”.

We can confirm the downward pressure on prices when we look at the headline CPI or CPI excluding fresh food. Moreover, if we look at the CPI excluding food and energy (close to the core CPI in the USA), the momentum towards price increase seems much weaker. In view of the weakness of the move towards 2 percent target, the additional action was deemed necessary.

However, the reasoning provided by the BOJ in taking the action leaves us with some uneasiness. In particular, mentioning of decline in crude oil prices is controversial.

Decline in crude oil prices means improvement in terms of trade which exerts positive impact on the economy. It implies that, if anything, it should be a factor justifying a tightening of monetary policy rather than of further easing. It should be all the more so if the monetary policy is forward looking.

The reason why such a judgement had to be made by the BOJ lies in the fact that the BOJ had committed itself to the targets in both the headline CPI inflation rate and the time frame for achieving it.

If a commitment is to be made about the time frame for achieving a specific inflation rate, the commitment should be made in terms of an underlying CPI inflation rate, such as the CPI excluding energy and food, to which the BOJ can provide influence.

If, on the other hand, a commitment is to be made about the target in terms of a headline CPI inflation rate, a commitment should not be made about the time frame since the headline CPCI includes uncontrollable and unpredictable factors such as crude oil prices. Instead of a specific time frame it should be committed in achieving the target rate in the “medium-term” or “on average”. This, in fact, is the kind of commitment that has made by other central banks which have adopted inflation targeting framework.

If the commitment is kept as it is, it may result in a misunderstanding among the economic agents about the intentions of the BOJ, which in turn may harm the credibility of the central bank. The announcements by the BOJ, which states, for example, its judgement that the prices are generally improving even when the CPI inflation rate is moving away from the 2 percent target rate, can gain more understanding if the framework for inflation targeting is made more clear.

Second is on the assessment of the impact of the QQE.

When the QQE was introduced in April 2013, the expected transmission mechanism were threefold; (a) decline in long-term interest rates and asset price risk premiums; (b) portfolio rebalancing where investment in risk assets and lending increase; and (c) changes in the expectations of markets and economic agents.

Whether the impacts of the QQE were actually achieved has been examined in a recent paper by the BOJ (BOJ Review, May 1, 2015). While analyses are made on the impact through the channels (a) and (c) above, not much is mentioned about the impact through (b). In order to maintain the credibility of the monetary policy, analysis should be made on this specific channel as well. It is necessary, all the more, because the evidence seem to show that the channel may not be working.

Figure 2 shows the breakdown of the assets held by the Japanese private financial institutions. While the increase in current account balance of the financial institutions at the BOJ after the introduction of the QQE has shown up as a rapid increase in cash and deposits of the institutions, it does not seem to have influenced either loans or holdings of securities. Loans are increasing gradually, but the increase is in line with the trend which had been seen before the QQE. Securities, on the other hand, have declined. 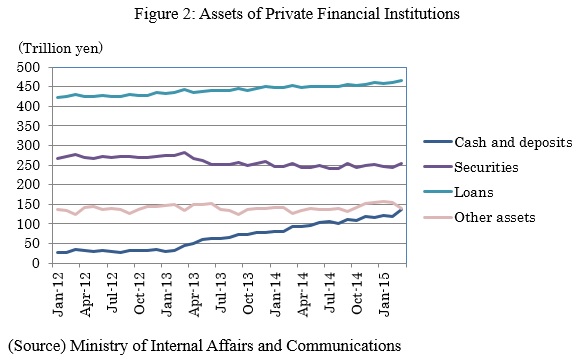 Figure 3 which provides the breakdown of the securities held by the private financial institutions shows that government bonds (JGBs) have declined rapidly because of the purchase by the BOJ in executing QQE. However, foreign securities and others have not increased enough to offset the decline of the JGBs. 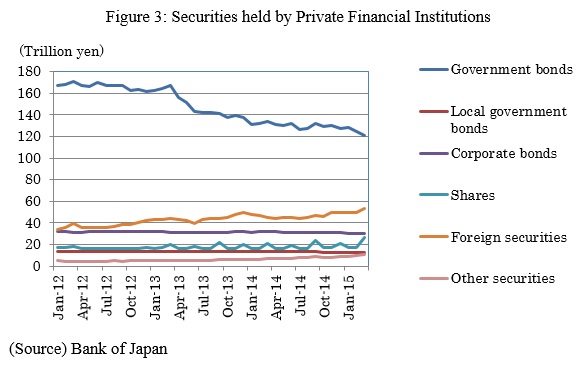 BOJ should examine whether this is in line with their intention. If not, it should explain whether any new initiatives need to be introduced to make the portfolio rebalancing effect more active.

Third is about the exit strategy.

When the Quantitative Easing Policy (QEP) was introduced by the BOJ in 2001, it was explicitly stated that the BOJ will maintain the policy until the CPI excluding fresh food “registers stably a zero percent or an increase year on year”. While there was some room for discussion as to what “stably” means, it was a concrete announcement about the duration of the QEP. This is the first example of what is now known as “forward guidance”.

In contrast, QQE is stated to be maintained “as long as it is necessary for maintaining that target in a stable manner”. This expression leaves some ambiguity as to the timing of the exit.

Since the full impact of the monetary policy requires considerable lag of about 2 years to realize, it means that, in the first case, the CPI inflation rate may overshoot in the longer run due to the prolonged easing that has taken place. On the other hand, in the second case, it means that the exit will start well in advance of the inflation rate actually achieving 2 percent. It may come as a surprise to many.

Whichever the case it may be, it should be made clear well in advance of the start of the exit so that any action taken with regards exit will not harm the credibility of the monetary policy.