To What Extent is Japanese Economy Consistent with MMT?

Modern Money Theory (MMT) is attracting a lot of attention among Japanese economists. It is understandably so because of the large government debt that Japan has, and because MMT argues that we don’t need to worry about the debt level.

Moreover, it is often said that MMT sees Japan as the typical case where MMT is proved to be appropriate. From that perception, it was surprising to find that the mentor of the heterodox literature, Professor L. Randall Wray, denied that to be the case in his “Japan Does MMT?” posted on June 4, 2019, in New Economic Perspectives. However, what he meant is that Japan has not followed the policy description given by MMT: “it is the best example of a country that always chooses the anti-MMT policy response to every ill that ails the country (ibid)”.

In spite of the negative assessment of the Japanese policy responses, the article does use the Japanese case to illustrate the arguments made by MMT. And it is about a number of statements that was made in this regard that I felt it requires some clarification from the point of view of the realities of the Japanese economy.

First is about the current Japanese economic situation. The article argues that the Japanese economy is growing only by 1 percent per annum, and with an expectation that the economy will suffer from US-China trade war, “what Japan needs is a good fiscal stimulus (ibid)”.

While it is true that real GDP growth rate is not that spectacular, it has been stronger than the potential growth rate that is about 1 percent. That is why the negative output gap has basically disappeared in the recent period as Figure 1 shows. That is also why the unemployment rate has reached a rate as low as 2.5 percent, which is considered to be a full-employment unemployment rate in Japan. On the unemployment situation, however, Professor Wray may have a different understanding, which leads me to the second point. 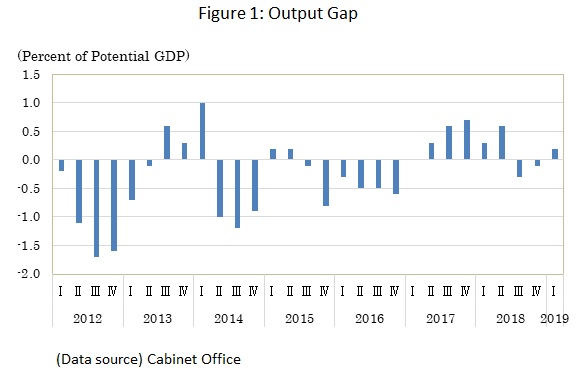 Labor market tightness is not because of shrinking population

While it is true that population in Japan is aging and shrinking, it is not true that the labor force is shrinking. It is in fact growing: it is growing because of the rise in participation rate of females and the aged as is shown in Figure 2. Therefore, it is the strong surge in employment that is reducing the unemployment rate that is more than absorbing the growing labor force. 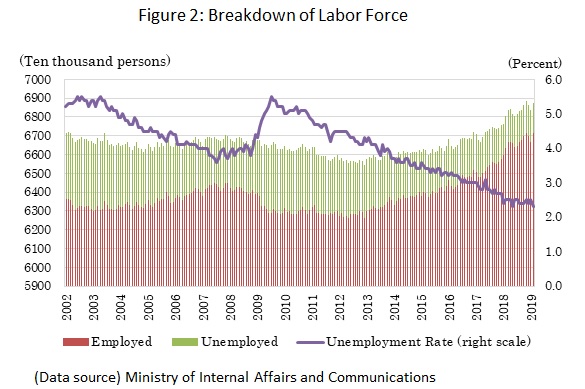 Further stimulus will lead to inflation, either in goods or assets

Third is about price developments in the Japanese economy. Japan still faces a challenge in achieving the inflation target even though “BOJ has done everything it could think of for the past quarter century to get the inflation rate up to 2%” (ibid).

However, if further fiscal stimulus is provided as suggested by MMT in spite of the full employment situation, it should lead to significant inflation in goods and services, even from MMT’s point of view.

It cannot be denied, of course, that goods and services prices will be slow in reacting. In this case, it could alternatively take the form of inflation in asset prices. In this respect, recent increase in land prices as well as stock prices, as shown in Figure 3, should be watched with caution so that they will not develop into bubbles. 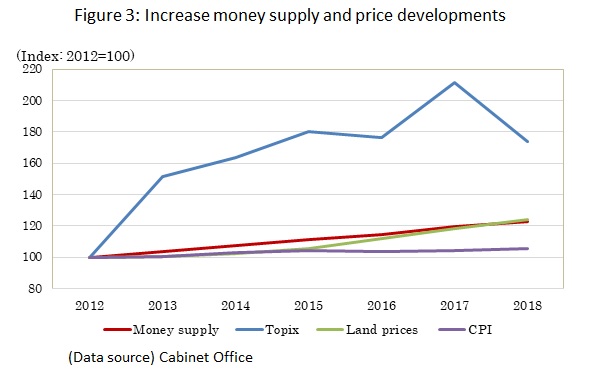 Wray Curve does not apply to Japan

Fourth is about the Wray Curve. It is a U-shaped curve that is introduced in the article that shows the relationship between rate of growth and deficit/GDP ratio, as is shown in Figure 4. (I presume in the following that “deficit” in this case means deficit in the primary balance.) 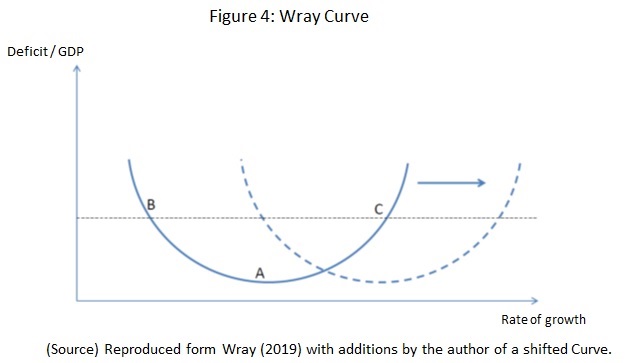 It argues that, assuming the economy is at Point A, if consumption tax rate is raised, it will bring the economy to Point B with higher deficit/GDP ratio and a lower rate of growth. He calls it an “ugly” way to raise the fiscal deficit. The better and “good” way to raise the fiscal deficit is to introduce “measured and targeted stimulus designed to restore confidence of firms and households” (ibid). By implementing such a stimulus, the economy will be at Point C. In exchange for a higher growth rate, deficit/GDP ratio will be higher but that itself will not be a problem for MMT. Furthermore, it argues that adjustments will take place so that the Wray Curve shifts to the right, reducing the deficit/GDP ratio to the new higher rate of growth.

It can be argued whether consumption tax rate-hike will actually raise the deficit/GDP ratio, and how much higher growth will shift the Curve to the right, I will touch upon the two points in turn.

On the impact of a consumption tax rate-hike on deficit/GDP ratio: When the consumption tax rate is increased by 1 percent, for instance, it is equivalent to an increase by roughly 2 percent of total tax (including central and local governments’), which, in turn is about 0.4 percent of GDP. If the multiplier of a tax increase is about minus 0.5. It will reduce the real GDP by 0.2 percent but increase the nominal GDP by about 0.2 percent. Therefore, tax/GDP ratio of about 18 percent will increase by about (18 × 0.018=) 0.3 percentage points. On the other hand, expenditure/GDP of about 20 percent will fall by about (20 × 0.002=) 0.04 percentage points. Therefore, the deficit/GDP ratio, which is the difference between tax/GDP ratio and expenditure/GDP ratio, should improve by about 0.34.

This back-of-the-envelope calculation is consistent with the simulation results by the Short-Term Macro-econometric Model of the Japanese Economy (2018 version), developed by the Cabinet Office which shows that consumption tax rate-hike of 1 percent will improve the fiscal balance to GDP ratio by about 0.3 percent of GDP.

What the calculation result shows is that, contrary to the presumption made by the article that consumption tax rate-hike will reduce real GDP growth rate and widen fiscal deficit, the tax rate-hike will curtail fiscal deficit. (After all, why would the government raise the tax rate if it will not contribute in curtailing the deficit.) While being an interesting idea, the Wray Curve, at least its left half, does not seem to exist as such.

Now, on the impact of the adjustment taking place at Point C that leads to a rightward shift of the Curve. It seems to depend on the higher tax revenue coming from higher spending by higher income: “Tax revenues will increase – not because rates rise but because income increases (ibid)”. However, higher tax revenues may not improve the deficit/GDP ratio. That is because GDP elasticity of tax revenue in Japan is almost one so that tax/GDP ratio will roughly stays the same even when there is a higher rate of growth.

Therefore, for the deficit/GDP to fall because of the higher growth rate, you need something other than the increase in tax revenues. It needs to come from either cut in government expenditure or from increase in tax rates, neither of which is assumed here.

Improving the understanding of Japanese economy for and against MMT

MMT raises interesting points about the conventional way of policy making. In that sense, I think it requires serious considerations. Trying to illustrate the argument by referring to the Japanese case is also interesting because you can see the logic of the MMT in a clearer way. I welcome the most recent article by Professor Wren.

However, the argument shows that there is some clarification that needs to be made in order to improve the understanding of the Japanese economy. I hope that the comments made above are beneficial for those who argue for, and against, MMT.