Verification of Financial Sustainability of the Pension System of 2019 : What it tells us

Financial sustainability of the pension system checked every five years

In August 2019, Ministry of Health, Labour and Welfare (MHLW) published the results of the “Verification of the Financial Sustainability of the Public Pension System of 2019” (to be called “2019 Verification” hereafter). Verification is done every five years to see how the financial situation of the Japanese pension system will be, assuming that the current system is unchanged. In the verification exercise, the most recent long-term projection of the population is incorporated: The projection that was used this time is the one that was published by the National Institute of Population and Social Security Research in April 2017.

The main purpose of the Verification is to check whether the public pension system can maintain a replacement ratio (the ratio of pension benefits to average after-tax wage income of a working male) of more than 50 percent. If it cannot, then the law requires that benefits and contributions need to be reviewed and that necessary actions to be taken.

The current pension system incorporates a macroeconomic slide system, which automatically adjusts the benefits when the number of premium payers falls or when average life expectancy extends. The system aims to achieve a financial balance for the next hundred years so that the amount of financial assets accumulated as pension reserves at the end of the hundred years period will be at least a year’s worth of pension benefit payments. The Verification is required to show when the system becomes no longer necessary.

Main results of the 2019 Verification

The main results of the 2019 Verification are as follows:

First, the financial sustainability is shown to depend greatly on how economic growth and labor market participation will be.

If both economic growth and labor market participation rates rise at relatively high rates, the replacement ratio will be able to maintain the level at above 50 percent. Also, the amount of pension benefits will be increasing even after adjusting for price increases.

However, if the economic growth and labor market participation rate rise only at modest rates, the replacement ratio will fall to 50 percent in mid-2040s, and, when macroeconomic slide system is kept in place, the ratio will fall to around 45 percent. In the worst case, where economic growth and labor market participation rate stays flat at roughly current rates, pension reserve for the national pension will be depleted and the public pension system will become a perfect pay-as-you go system, in contrast to the partial pay-as-you-go system (which makes use of the reserve funds) which is the feature of the current public pension system. The replacement ratio will, in this case, fall to a level as low as 36~38 percent.

Second, implications of a number of alternative policy options are examined. The options include; enlarging the coverage of the insured, extending the premium payment period, and allowing more choices with regards the age from which you start receiving pensions. According to the 2019 Verification, these options are shown to have large impacts on the replacement ratios and the amount of pension benefits to be received.

Issues for discussion when assessing 2019 Verification

Verification is an extensive exercise, and related materials, such as detailed assumptions and the outcomes of the verification, are made available. They should be scrutinized and analyzed in depth in order to see how reliable the pension system is. The followings are some of the points that should be looked into when we make a closer inspection of the results.

First is about the model household that is set when replacement ratios are calculated.

In the Verification, when replacement ratios are calculated, a household consisting of a husband and a wife is assumed, and the pension benefit of this household is considered to be the total of basic and employees’ pensions. However, it is assumed that the husband is the only wage-earner so that only he receives the employees’ pension in addition to the basic pensions received by the two. 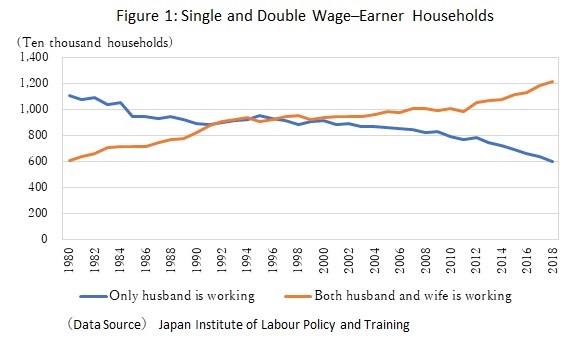 How would it look like when we calculate the replacement ratios for the double wage-earner households? Exact numbers will, of course, depend on the types of employment (e.g. regular or non-regular worker) of the wives and their wage levels. Generally speaking, however, the ratio should fall relative to that of the single wage-earner households.

Furthermore, we need to think how would it look like when one of the couple pass away. What should we think of these single households? As Figure 2 shows, of those households with a member who is aged 65 or above, the number of single person households is now equivalent to nearly 90 percent of the number of husband-and-wife households. 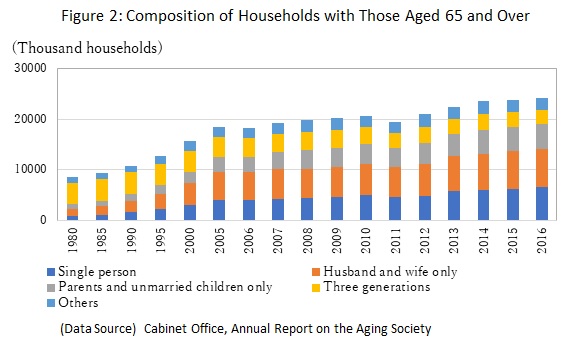 It should also be noted that aged single-person households, the share of female-only households is about 60 percent, as is shown in Figure 3. 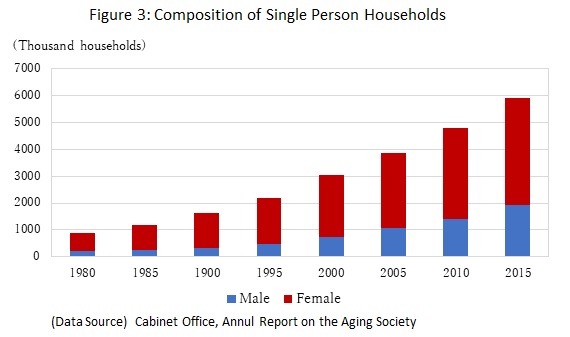 If she had not been working, she would have to live on her own basic pension and widow’s pension from her husband’s employee’s pension. Total pension benefits received may or may not be enough to maintain the living as before, depending on, among others, the fixed cost of living.

Discussion above shows that just looking at the replacement ratio of households of two with a single wage-earner may be misleading. By doing so, you may be considering the future of only a part of the households.

Second is about the assumptions on which the simulations are made.

In the 2019 Verification, assumptions for the simulations are taken partly from the Cabinet Office’s “Economic and Fiscal Projections for Medium to Long Term Analysis”, and Japan Institution of Labour Policy and Training’s “Estimates of Demand and Supply of Labour”, complemented by MHLW’s own long-term projection using production function approach and others. As for the growth rates of total factor productivity (TFP), six cases (Cases I to VI) are set as alternative scenarions.

According to the results of the simulation exercise, in cases where both economic growth and labor market participation rates are relatively high (Cases I to III, to be called “optimistic cases” hereafter), the condition that replacement ratio will remain above 50 percent will be met. However, in cases where both economic and labor market participation rates are modest (Cases IV to VI, to be called “pessimistic cases” hereafter), pension reserves will be depleted, and the replacement ratio will fall below 50 percent.

Therefore, it is obvious that efforts to avoid falling into pessimistic cases need to be made. That is, in effect, what Abenomics, particularly its third arrow, is trying to do.

However, there is no assurance that the pessimistic cases will be avoided. If the risk that actual performance will be close to one of the pessimistic cases materializes, then the public pension system will be financially unsustainable and will not be able to provide pensioners with sufficient level of income.

Third is about the problem which can be identified even for the most optimistic case (Case I).

Fourth is about what would happen under the most pessimistic case (Case VI).

When the actual development follows Case VI, this will be managed in a perfect pay-as-you-go system (with no pension reserves) so that total pension payments have to be capped to match total receipts. As a result. The replacement ratio will fall to a level of only 34~36 percent in hundred-years-time, as shown in Figure 5. 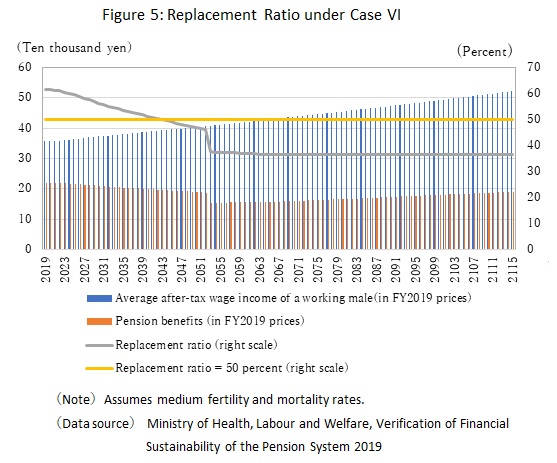 According to the results of the simulation exercise for Case VI, pension benefits (in FY2019 prices) will be 191 thousand yen (sum of basic pension of 100 thousand yen and employees’ pension of 90 thousand yen, in FY2019 prices). It is barely more than the public assistance payments of 183 thousand yen received by a couple aged between 65 and 70, living within the 23-wards in Tokyo at present. Amount of public assistance payments is determined so that it will cover the cost of minimum living of the time. If the pension system only allows a minimum living, it should be disappointing for majority of pensioners who expect more.

Need of a rational, long-term, and altruistic approach to pension reform

When aging and shrinking of population takes place, pension system such as the one in Japan, will be subject to a great stress. In such a situation, Verification exercise provides us with a valuable opportunity to review our pension system. Japanese people should make the most of the Verification and implement the necessary reforms.

When we examine the 2019 Verification, we should be careful not to focus too much on the optimistic cases. Optimistic cases in the 2019 Verification assumes that all the necessary structural policies are taken, and that they show their impact in full. Implementing structural polices mean they have to strip privileges from the vested interests; it is a difficult task to pursue. Implementation of these policies tend to take time and only be partially achieved at best.

If we want to be prudent, therefore, it is important to place pessimistic cases as the starting point. It means that we have to deal with more issues in order to make the public pension system a satisfactory one. The depletion of pension reserves and a transition to a perfect pay-as-you-go system implies that macroeconomic slide system have to maintained. As a result, replacement ratio will fall below 50 percent and become closer to the public assistance payments that are intended to assure only a minimum living standard. It implies that pension will no longer be sufficient to support a comfortable life.

For a comprehensive reform of the pension system, we need to have a rational long-term view, with altruistic mindset, accepting the interest of the future generation as your own. Whether we are able to make the most of the 2019 Verification seems to depend on such virtues of the people.