The outcome of the spring wage round is once again attracting great attention. So far, agreement seems to have been reached in major car and electrical manufacturing firms to increase wages by an amount exceeding last year’s pay rise. It is hoped that this trend will lead to economy-wide increase in wages, especially in basic scheduled pay – or “base-ups” – because it is considered to be essential in supporting household consumption; a key element in achieving sustained growth of the Japanese economy.

In this regard, record high level of profits in the corporate sector is a favorable element. However, under the current situation, higher profits do not necessarily lead to higher wages. Moreover, even high wage increase in certain industries may not necessary imply total wage income growth for the economy as a whole.

In the following, the experience of the last year’s wage increase will be reviewed. It will be suggested that, when considering the macroeconomic implications of the wage increase, its industrial composition is going to be important.

It is has now become a common understanding that the mini recession that started in early 2014 and lasted for little more than half a year was a result of the weak development in wages. Wage increase in the year had turned out to be insufficient to offset the increase in prices.

The development of total wage income of the economy as a whole (i.e. compensation of employees) is shown in Figure 1. It shows that, even though the nominal compensation of employees increased in 2014 at a higher rate than those in the preceding years, it fell significantly in real terms. It is because its rate of increase was less than that of the deflator that reflected the higher underlying inflation rate and the increase in consumption tax rate (headline CPI, for instance, had risen by 2.7 percent in 2014). 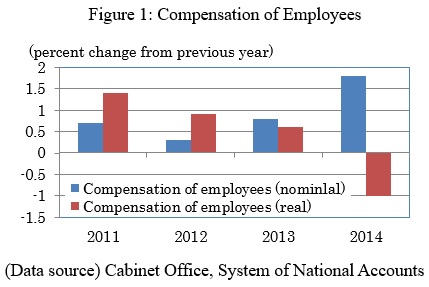 The reasons for the relatively weak wage increase in 2014 are twofold.

One is the way depreciation of the yen had affected the economy.

The traditional channel through which the depreciation of the exchange rate would have an expansionary effect on the economy is for the deprecation to allow firms to reduce the export prices denominated in foreign currency. It is expected to benefit firms by prompting increase in export volume.

Even though the firms enjoyed record high profits, they were cautious in raising wages as well as in increasing business investment. The firms had chosen to maintain the net lending position (savings exceeding investments) that had been with them since the burst of the bubble economy in early 1990s (for further discussion on the net lending by the corporate sector, please see 「Net Lending by the Corporate Sector: The Case of Japan」(20141106)).

As a result, wage increase turned out to be much weaker than the pick-up in inflation rate that was brought about by the depreciation of the yen and the consumption tax rate hike.

Shrinking employment in the manufacturing sector

The other reason for the relatively weak increase in wages was the squeezing of the employment in the manufacturing industry.

Manufacturing industry was the one of the main industries which benefitted from the depreciation and was able to raise wages relatively more than other industries in the economy. However, it was also an industry where labor squeezing had taken place because of the introduction of labor substituting technology and the shifting of production sites overseas. As a result, the positive effect of the wage increase in the manufacturing industry on the total wage income of the economy (i.e. compensation of employees) was offset by the decline in number of workers that were able to enjoy higher wages. 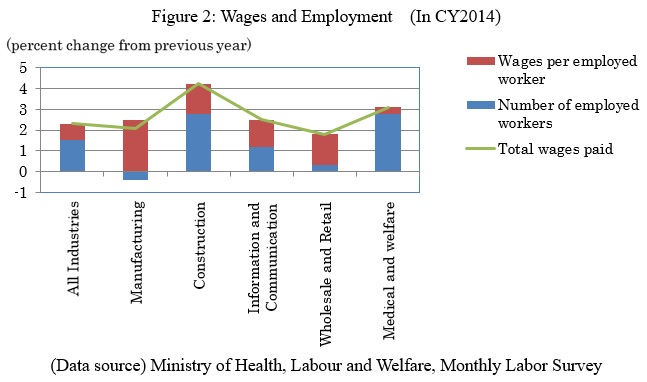 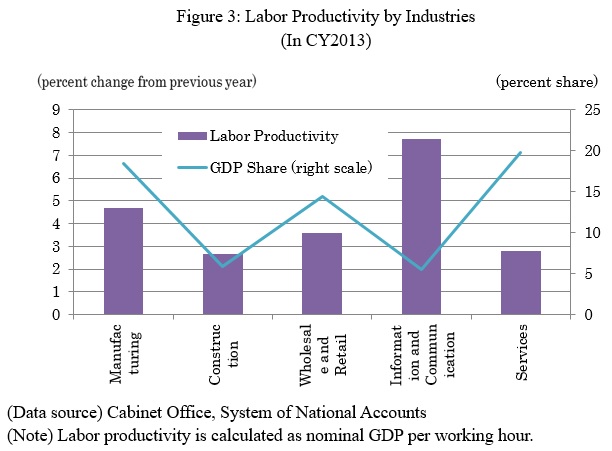 As a result of the contraction of high labor productivity industries, the labor productivity of the economy as a whole also declined in 2014. Figure 4 shows the significant change that took place in 2014 compared to the preceding years. 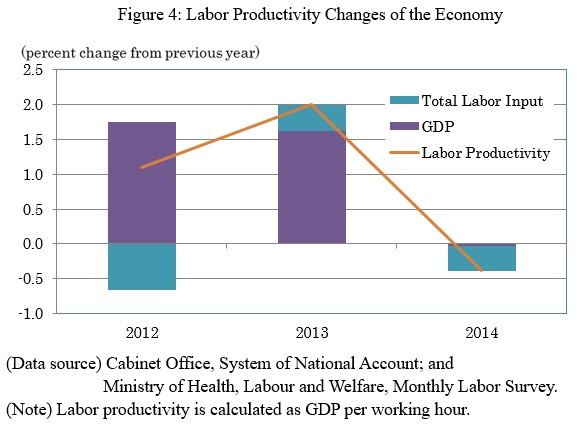 An encouraging factor surrounding wages (and probably not monetary policy) this spring is the fall in the inflation rate. CPI rose by only 2.0 percent year-on-year this February, which means virtually zero CPI inflation rate if the impact of consumption tax rate hike is excluded. A part of this slowdown in the inflation rate reflects weak economic activity which has been discussed already (output gap at the end of last year is still estimated to have been a negative 2.3 percent of GDP by the Cabinet Office). However, it also reflects the significant fall in oil prices; a positive impact of the terms of trade gains. And the resulting lower inflation rate should contribute in pushing up a given nominal wage increase in real terms.

The results of the spring wage round so far show that there will be a higher wage increase, including higher base-ups, for the larger firms in FY 2015 compared to the previous year.

For the wage increase to have a strong positive impact on the macroeconomic situation, it is important that these developments will extend to smaller and medium sized firms (firms with more than 500 employees only covers about one tenth of the total private sector employees) and to non-regular workers (regular workers now commands only about two thirds of the total workers) .

However, what we have discussed above implies that it is also important that industries such as the manufacturing which pays high wages will expand their production and employment. In a situation where population is declining and the market destined to shrink, we may have to rely on a fortunate coincident unless the government’s growth strategy provides a clear vision and a firm policy setting for a brighter future of these industries.