Wages rise where it should: Market mechanism at work

The puzzle of tight labor market with low wage increase

The active job openings-to-applicants ratio is now at its highest for more than 40 years. The ratios for April and May, which recorded a seasonally adjusted 1.48 and 1.49, respectively, exceeded the peak that was recorded in the bubble period (1.46 in July 1990) . It has become next only to the peak that was recorded just before the first oil crisis (1.53 in February 1974). Combined with the fact that the unemployment rate has recorded 2.8 in April and 3.1 in May, the labor market in Japan is now at full employment. We hear a lot about labor shortages in various sectors of the economy.

Nevertheless, wages seem to lack reaction to the situation. As Figure 1 shows, base wage per worker at April has risen by year-on-year rate of 0.4 percent, only marginally higher than the average rate of increase for 2016 of 0.2 percent. It looks as though the market mechanism is not at work in the Japanese labor market. In this month’s column, I intend to offer an explanation to this seemingly a puzzling situation. 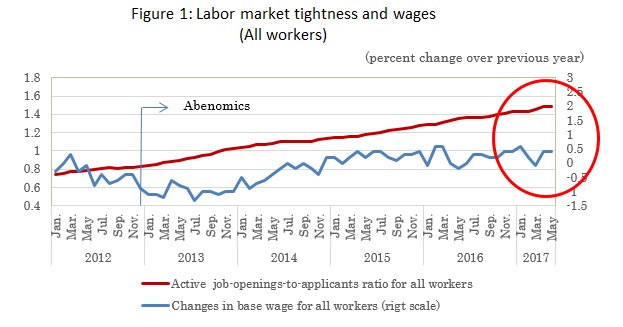 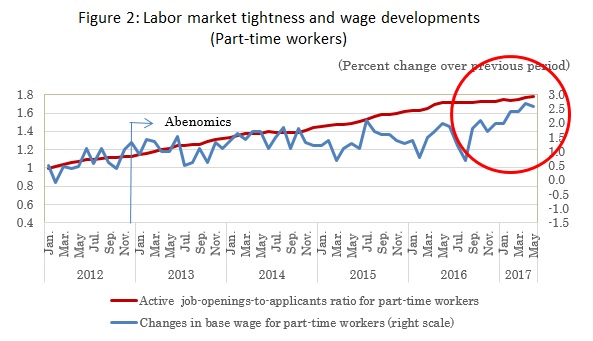 An important point to note in this connection is that the low rate of wage increase reflects less tight labor market condition faced by full-time workers, as Figure 3 shows. For instance, the active job-openings-to-applicants ratio for regular workers (those under lifetime employment contracts, and whose share in the total job openings for non-temporary workers is about 80 percent) is still less that one in May, at a seasonally adjusted 0.99. 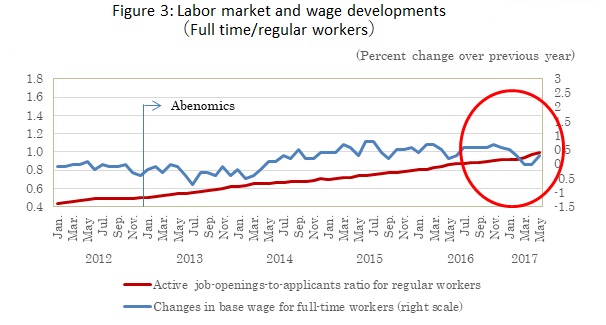 The above breakdown shows that wages are rising where it should, in part-time workers, and are not where it shouldn’t, in regular workers. This being the case, we can say that the market mechanism has been at work in the Japanese labor market until now.

If we look into the future, we may see some changes in the wages-front. Since the active job-openings-to-applicants ratio for regular workers is about to exceed one, the base wage for the regular workers may finally start to rise more strongly. Reflecting the changes, total wages may also start to rise at a relatively higher rate.

However, we need to acknowledge, at the same time, that there is a number of factors that may make the upward revision of average base wage for regular workers slow.

First, a major revision of base wages in Japan takes place only once a year, at the spring wage round between the employers and the trade unions. This being the case, the higher wage increase may not become evident until next spring.

According to the final report on the spring wage round published by the JTUC-Rengo in early July shows that, of the total 2.15 percent increase in wages for an average worker, the increase in base wages (the “base-ups”) was still only 0.48 percent (the remainder is due to seniority: an increase in wages as the worker gets a year older). It has stayed roughly the same as the base-ups achieved in the 2016 spring wage round. (Note: 2.15 percent is an average for the outcomes where breakdowns are available: if the outcomes whose breakdowns are not available are also included, the average wage increase will be 1.98 percent).

Wage increase may also be subject to structural downward pressure 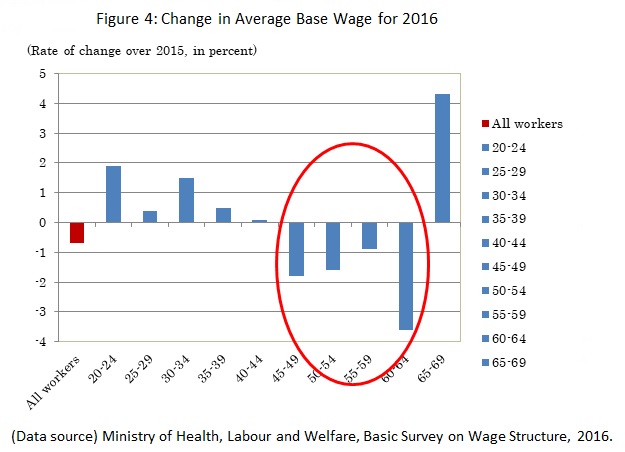 The flattening of the wage profile of this kind has been taking place in Japan for some time. It is a reaction by the firms to the aging of the work force and a more fierce competitive environment. Younger workers have a higher rate of mobility so that, in order to persuade them to join and stay in the firm, companies are offering more attractive wages. In contrast, older workers have low rates of mobility and prefer job-security rather than wage increase so that the wages are adjusted in order to reduce the total payroll.

The market mechanism has been working in the labor market in Japan. The low average rate of wage increases for total workers reflected uneven tightness of the labor market: the wages have been increasing for the part-time workers where demand for labor was high, but it was clouded by the low rate of wage increase for regular workers where demand for labor was low.

Since the labor market condition for regular workers seems to be tightening, assuming that economic environment do not deteriorate, wages for this type of workers will start to rise more strongly. It should lead to higher rate of wage increase for total workers as well. In this respect, I am relatively optimistic in the short-term.

However, since structural downward pressure continues to be exerted on wages, especially for the older workers, the rate of wage change will be limited. Taking this into account, I remain relatively cautious in the medium term.