What are the Implications of Postponing Numerical Targets?

Postponement of numerical targets in Japan

In the recent years, we have been witnessing a series of postponements of numerical targets set by the authorities.

In the area of monetary policy, target year of achieving inflation rate target has been postponed several times. When the Quantitative and Qualitative Monetary Easing (QQE) was introduced in April 2013, CPI inflation rate target of 2 percent was to be achieved within 2 years. However, as it became less certain of being achieved (Figure 1), the target year was postponed six times, from FY2015 to eventually FY2019, and, in April this year, the target year itself was ceased to be mentioned explicitly. 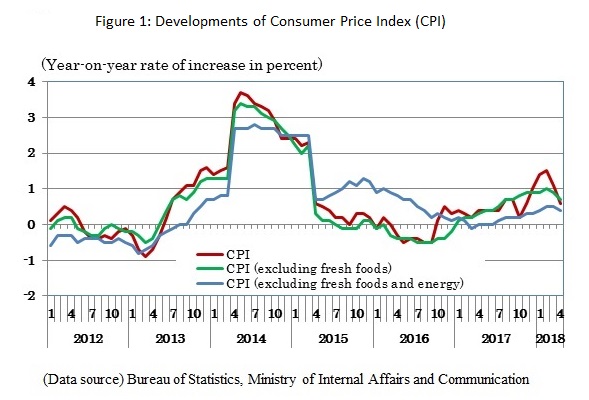 Target year is also being postponed in the area of fiscal consolidation. In the Medium-Term Fiscal Plan announced in June 2013, the target was to achieve surplus in the primary balance by FY2020, and stably reduce government debt to GDP ratio thereafter. However, since it became difficult to achieve the target (Figure 2), due to the postponements of the consumption tax rate-hike to 10 percent and to the increase in expenditure to assist child-care, it has been decided to revise the Plan and to postpone the target year. We will have to wait until the end of June to find out what the new plan would be but the private sector members of the Council for Economic and Fiscal Policy, which is responsible for coming up with the draft of the Plan, have argued for a new target year of FY2025 for the primary surplus to be achieved. 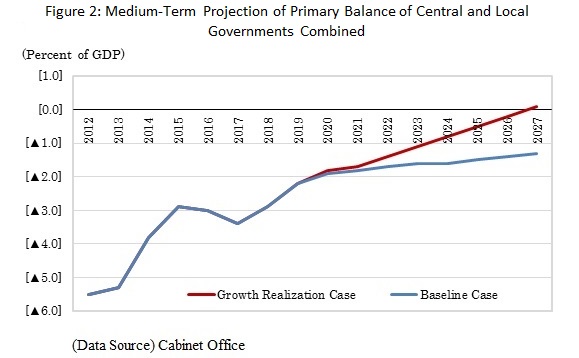 First of all, the significance of setting numerical targets needs to be confirmed.

Private sector’s reactions to the numerical targets are important elements in achieving targets. If the households, facing the inflation rate target set by the central bank, believe that prices will start to rise as a result of the actions taken by the bank, they may start to buy goods and services before the price rise, and, as a result, actually lead to a rise in prices due to stronger demand. If fiscal consolidation targets are expected to be achieved, firms can be confident that economic and monetary situation would be stable so that they will engage in stronger private fixed capital investment, thereby leading to stronger growth.

In order to strengthen the credibility of numerical targets, there are cases where intermediate targets are set. When the consumption tax rate-hike to 10 percent was postponed for the first time from October 2015 to April 2017 (it was later further postponed to October 2019), an intermediate target of achieving primary deficit of one percent of GDP in FY2018 was added to the Medium-Term Fiscal Plan. It was an introduction of a plan-do-check-action (PDCA) cycle to fiscal consolidation, implying that fiscal consolidation measures will be revised and strengthened if the intermediate target is not met, reinforcing the case for achieving the numerical target by FY2020.

While the numerical targets were initially set to be achieved, it may become somewhat of a burden as time goes by. There could be cases where prices do not rise as expected so that additional monetary easing is required. However, the central bank may be concerned with the side-effects of such measures, making it reluctant to introduce additional measures. There could also be cases where fiscal consolidation had not made progress as expected so that additional fiscal consolidation measures are warranted. However, in view of the potential negative pressure on the economy that such measures would provide, they may choose not to introduce them. In such circumstances, there are incentives for the authorities to postpone the achievement of numerical targets These are examples of what in economics are called the “time-inconsistency problems” of economic policies.

If such postponements are allowed, governments and central banks may become easy in making efforts, and the private sector will be reluctant to believe in the commitments made by the authorities. To prevent postponements and enhance credibility of the numerical targets, arrangements are usually made to make postponements difficult. Such arrangements include legislating the targets and also making them international commitment.

Pressures provided by the private sector also help to prevent postponement of numerical targets. When aggressive fiscal consolidation measures are introduced at times of fiscal crisis, financial markets reward them by lowering the interest rates. However, when fiscal consolidation efforts are judged to be less than required, markets punish them by raising the interest rates. Such market reactions should provide pressures to governments and central banks to stick to the numerical targets set, and prevent them from retreating from their commitments.

Situation in Japan that allows postponement

In spite of these arrangements and market pressures, numerical targets in monetary policy and fiscal consolidation in Japan are being postponed. Such a situation could be a result of some specific conditions that currently exist in Japan.

Second, extremely easy monetary conditions continue to be in place. In particular, under the current operational target of holding long-term interest rate at zero (the “yield-curve control”), there is only a limited possibility of the interest rate to actually rise even when the situation requires the market to penalize the government by a higher interest rate. For this reason, the penalty is also difficult to be actually imposed on the government.

Third, aging is proceeding further. If there is a majority of young generation in the population, anything that takes place in the future would be considered to have an effect on their lives. In such a situation, it would be of their interest to pay attention to the deflationary situation and the worsening of the fiscal situation. However, if the population mainly consists of the aged generation, possible future developments could be considered to affect the next generation rather than themselves. In such a situation, they would not be so concerned about the postponement of numerical targets as far as they would not create immediate problems that need attention.