Since the beginning of March, Japanese yen has been depreciating. While the exchange rate has returned somewhat against other currencies, yen-US dollar rate is still significantly weak at around 130 yen as of mid-May.

Impact on trade of goods

One of the obvious channels which the depreciation will affect the economy is through trade of goods. Textbooks often discuss the impact by assuming that export prices are fixed at the exporting country and the impact of the exchange rate fluctuations is basically reflected in the export prices at the destination country. That is the assumption made when Marshall-Lerner conditions are derived, for example. In this case, export volume is expected to increase as the price faced by the customers in the destination falls.

However, in the case of Japan, that does not seem to be the case. As Figure 1 shows, export prices in yen-terms are far from being stable: it has moved much more closely to the exchange rate fluctuations than the export prices in contract currency-terms. 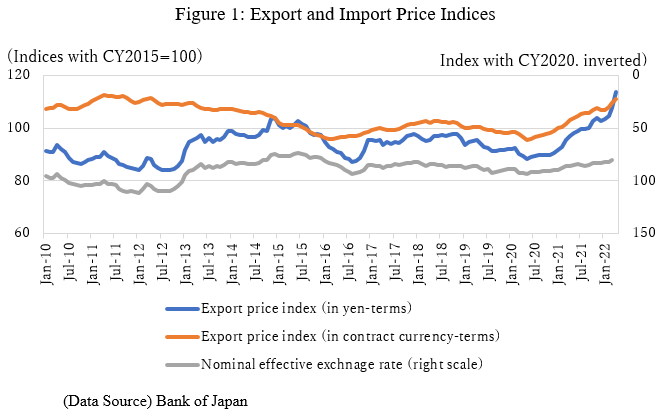 It reflects the fact that, contrary to the usual assumption made by textbooks, substantial portion of export contracts use US dollar as the contract currency. As Figure 2 shows, among contract currencies for exports, the share of US dollar, at 49.5 percent, is larger than the Japanese yen, whose share is 37.3 percent. 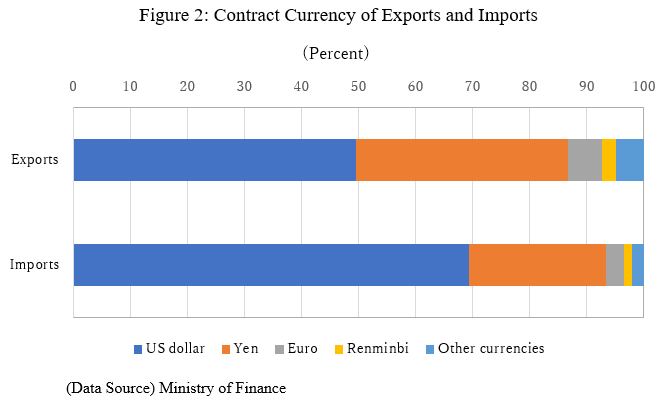 On the other hand, the share of Japanese yen as the contract currency for imports is relatively small so that export prices are mostly fixed in other currencies, US dollar in particular. The depreciation of the yen will be reflected in higher import prices in yen-terms and lower sales of imported goods. It will be a burden on the importing industries which already faces difficulty in passing the increase in input prices on to retail prices because of the weak domestic demand and a negative output gap.

We have seen that the share of US dollar as the contract currency is larger for imports than exports. Therefore, the depreciation of yen against US dollar should be reflected in the larger increase in import prices in yen-terms relative to export prices (B1).

In addition, Figure 3 shows that, since mid-202, imports have tended to exceed exports (b2). As a result, the trade account balance has turned deficit from the same period. 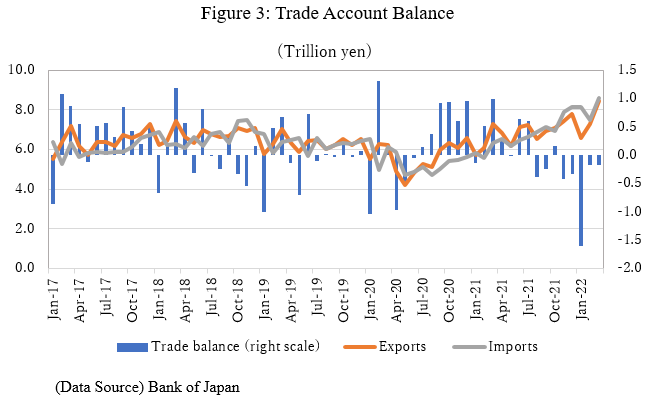 Both (B1) and (B2) suggest that the import prices will have a larger impact on the economy than the export prices. It implies that the economy will be subject to negative influence due to the worsening of the terms of trade and the fall in real income.

It should be noted, however, that the impact of exchange rate fluctuations would not be felt only by the trade in goods. It could also be felt in trade in services, and in income received from abroad. These aspects are what will be examined next.

Impact on trade of services 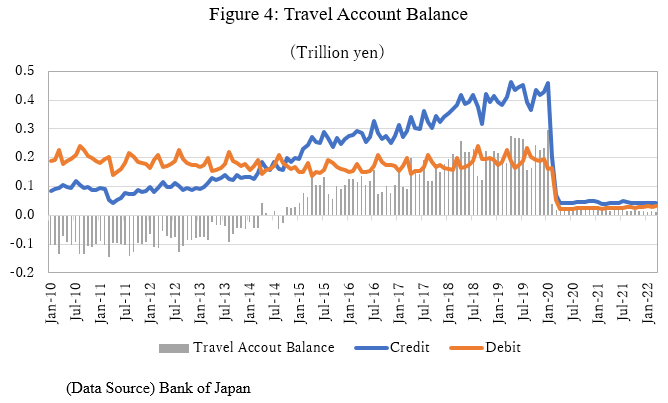 On the other hand, as Figure 5 shows, primary income account has been in surplus for a long time because of the large net foreign asset that Japan has. About half of both foreign assets and foreign liabilities of Japan are in US dollar currency (46.2 percent and 43.5 percent, respectively, at the end of 2020). However, because foreign assets are more than foreign liabilities, impact of depreciation on the asset side overwhelms its impact on the liability side. Therefore, when yen depreciates, net receipt of interest and dividends tends to increase in yen-terms. The steep increase in primary income received in March 2022 should be the result of such a positive impact. 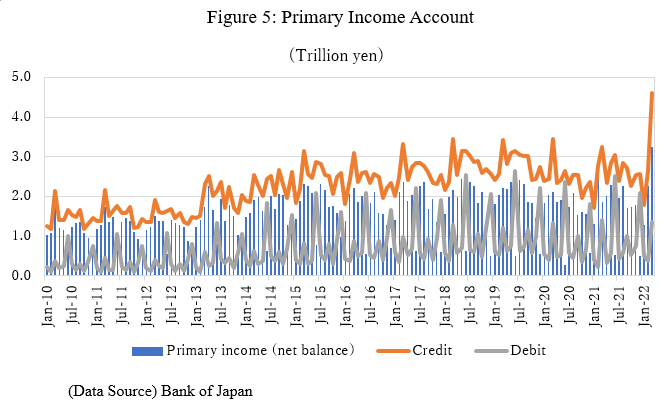 GNI and its distribution to the household

Theses impacts will be summarized in the SNA as changes in real GNI (gross national income) which is the sum of real GDP with “net gains from terms of trade changes” and “net income received from abroad”.

If the real GNI increase more than real GDP, it means that the exchange rate changes had a net positive impact, and vice versa. 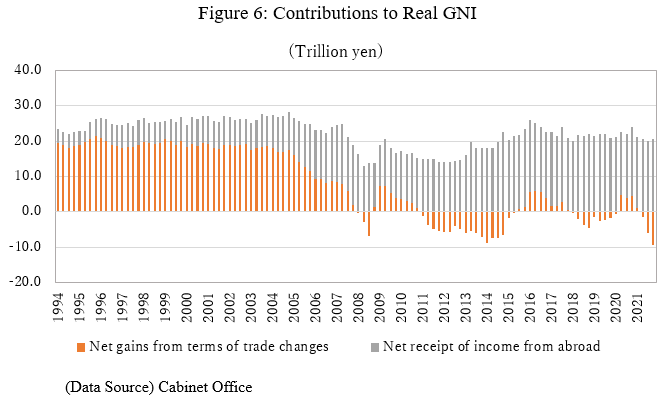 Figure 6 also shows that the negative terms of trade changes has become larger in the recent quarters. However, this is too early to be the result of the depreciation of the yen. Instead, is should be regarded as a result of the worsening of the terms of trade due to the rise in prices of primary goods. What needs to be seen is whether the depreciation of the yen taking place since the first quarter of 2022 will further increase the negative contribution.

Finally, to conclude, it should be mentioned that, even if the depreciation of the yen has a positive impact on the economy, what is important is how the positive impact will be distributed within the economy. That is particularly the case for a country like Japan where households have only limited means to enjoy the better situation faced by the corporate sector: wages have increased only modestly, and holdings of shares by households remains insignificant.

If the depreciation of the yen is to benefit the households and, in turn, to stimulate household spending so that it would initiate a virtuous cycle for the economy to grow, ways to improve income distribution needs to be explored.