What Is Required to Achieve “Equal Pay for Equal Work”?

One of the most prominent features of labor market development in Japan is the sharp increase in non-regular workers. The Labor Force Survey data shows that the average share of non-regular workers in the labor force in CY2015 has risen to 37.5 percent, an increase by 5 percentage points since ten years ago (32.6 percent in 2005). 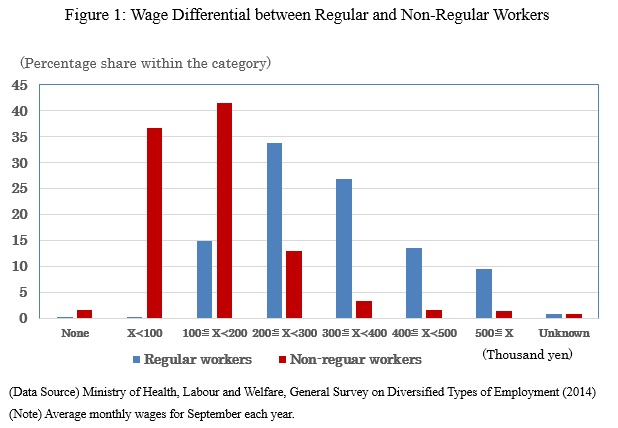 This fact lies at the background of the recent initiative by the Government in pursuing “equal pay for equal work” among regular and non-regular workers. It is expected to be an important part of the comprehensive program to “Promote the Dynamic Engagement of All Citizens,” the core of the second stage of Abenomics.

Achieving “equal pay for equal work” is important in addressing a number of serious problems that Japan faces at present.

First, it addresses the problem of widening inequality within the economy. One of the reasons for the increase in dispersion of incomes is in the fact that non-regular workers, who receive less wages, are increasing their share in the nation.

Second, it addresses one of the important factor for the low fertility rate in Japan. Insufficient income is one of the factors that is responsible for the falling rates in marriage as well as the decline in desired number of children.

Third, it addresses the short-term challenge of raising wages in order to stimulate household consumption. The improvement in corporate profit needs to feed into increase in wages of not only regular workers but also non-regular workers.

Achieving “equal pay for equal work” is undoubtedly an important task. However, achieving it in Japan is not that easy.

Rather than being employed to do a certain job, regular workers’ work involves being engaged in a variety of jobs, being subject to periodical shifts in work, and having to accept changes in the location of the workplace from time to time. The system obviously places a heavy burden on the regular workers. In exchange of the burden, therefore, the workers are offered lifetime employment.

In addition, it is usually the case that, through experiencing a number of works and receiving in-house training, regular workers accumulate human capital, often that of the firm-specific variety. The devotion is rewarded by the seniority-based wage system.

In such a system, it is difficult, in the case of regular workers, to identify what their jobs are, and link them with the wages they receive. Their total wage payments, including their retirement allowances, may correspond to their total contribution to the company.But, in general, their wages at each point of time during his employment would not be linked to their work, and certainly not to their jobs, at the time.

If the trade unions are established by craft or profession, it may be easy to establish an “equal pay for equal work.” Members of the trade union, who are in the same profession and have same degree of skill, should be identified, and would be receiving the same wage even though they work for different firms.

However, trade unions in Japan are established by companies. The demand for wages as well as the settlement of wage negotiation takes into account the different situations that the companies are in, particularly in terms of their profitability. As a result, there is no reason for “equal pay for equal work” to be achieved through the wage negotiations by the trade unions.

Taking these factors into account, achieving “equal pay for equal work” in Japan seems to be a very difficult task.

Increasing mobility is the ultimate solution

If there is a way to achieve “equal pay for equal work” in Japan, it should be a way which relies more on market mechanism.

The difference in wages for same work should stem from the fact that there is no mobility among the workers. If the workers are able to change companies in pursuit of a higher pay, the competition for the productive workers should equalize the wages over same work. Moreover, we may be able to say that, while we may achieve a notional “equal pay for equal work,” it cannot be proved to be appropriate unless it is tested by market forces.

In this sense, increasing the mobility of workers is the most straightforward way of achieving equal pay for equal work. Admittedly, it would not be consistent with the lifetime employment and seniority-based wage system that has been the characteristics of the Japanese employment system since the high-growth period of the 1960s. If the mobility is to be increased, the system would have to be reconstructed as a result.

The argument for “equal pay for equal work” seems to be a cry for a reform of the Japanese employment system which has already been stretched to the limit.