What Should the Target Be? : Oil Prices and Monetary Policy

Expansion of the QQE

Since the recent macroeconomic performance of the Japanese economy had been weaker than expected (please refer to my column for October 2014「Current Economic Situation: An Assessment」), the announcement can be praised as the BOJ’s positive action to address the situation. Being a surprise, the market welcomed the action by increase in stock prices and further depreciation of the yen. It is hoped that it will eventually show its effect in the real economic activity as well.

Besides the fact that it was a surprise action, what attracted my attention in the announcement was the logic employed by the BOJ in order to justify the expansion of the QQE. In addition to the “somewhat weak developments in demand following the consumption tax hike”, it also mentioned the “substantial decline in crude oil prices” as a factor that exerted downward pressure on prices. As Figure 1 shows, it is true that the fall in prices of crude oil prices and oil products have been substantial. They were the main reasons why the CPI inflation rate (in terms of CPI excluding fresh food, or the Japanese-type core CPI) has fallen from its peak in May 2014 of 3.4 percent (in year-on-year terms) to 2.9 percent in October 2014. 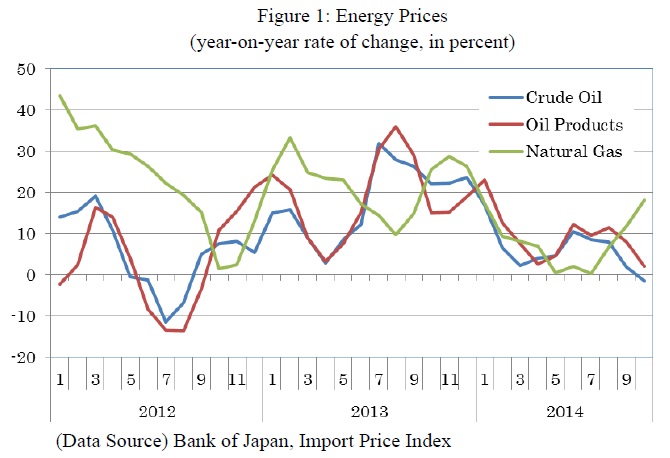 However, should monetary policy be eased when oil prices fall? To answer this question, there are some important points to be recognized.

First thing that needs to be recognized is the fact that oil prices are volatile. Even if they are falling at one point of time, they may be rising in not so far in the future. If that is the case, monetary policy should not be influenced by the short-term fluctuation in prices coming from oil price volatility, but should concentrate on the medium-term trend in prices. This is partly recognized by the BOJ, as its emphasis on CPI excluding fresh food shows. However, if they consider fresh food to be too volatile to assess the underlying inflation rate, same consideration should apply to oil prices as well.

In fact, the Federal Reserve Board (FRB) monitors personal consumption expenditures price index excluding food and energy (core PCE) in managing monetary policy. Since we already have a CPI series which excludes food and energy (US-type core CPI), we could focus on the series to better understand the underlying inflation rate.

Figure 2 shows the recent development of the three categories of CPI. You can see that the inflation rate as seen by the US-type core CPI has been flat since the consumption tax rate hike in April. It shows that, according to this series, there has been no change in the underlying inflation rate. It also shows that the inflation rate, even including the impact of consumption tax rate hike (estimated to be about 2 percentage points), was only 2.2 percent in October over the same month previous year. Regardless of the developments in oil prices, it seems enough to justify the expansion of monetary easing. 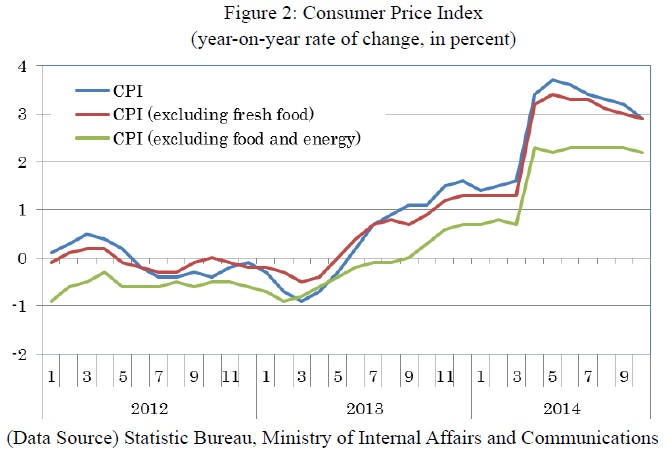 Second thing to note is the fact that fall in oil prices implies improvement in terms of trade. Since improvement in terms of trade has a stimulus effect on the economy, if any action is to be taken at all, it should be tightening of the monetary policy. If, on the other hand, monetary policy is eased because of its negative effect on prices, it would be exactly the opposite of what should be done.

This kind of a situation could be avoided if focus is given to CPI series which excludes the impact of oil price changes (such as the US-type core CPI). Since oil price changes would not affect the inflation rate identified by such a CPI series, there would be no reason to ease the monetary condition when oil prices fall.

One factor that BOJ mentions in explaining the need for the expansion of monetary easing is the “risk that conversion of deflationary mindsets might be delayed”. It is trying to draw people’s attention to the risk that the gradual improvement in deflationary expectations which has been achieved until now, will come to a halt and even see a reversal.

It is an important lesson we have learned that not only macroeconomic demand-supply gap but also expectations of future price trend held by economic agents determine price developments. However, if that is the case, it should also be important that central banks try to influence the formulation of price expectations. The efforts that central banks should make towards this end should include provision of information on the fundamental determinants of underlying inflation. They should, at a time like this, explain the need to exclude volatile factors such as oil prices. In this respect, if they themselves do not focus on such CPI series as the US-type core, it makes the explanation difficult to convey.

Dual Commitment to Rate and Timing

The last thing that needs to be mentioned is about the feature of the target that should be set under the inflation targeting framework. As it is already well known, BOJ’s QQE has, as its target, “achieving CPI inflation rate of 2 percent within 2 years”. It commits to both the target rate in CPI and the time horizon in achieving it. This impressive commitment succeeded in giving a strong impression that the monetary policy regime has changed drastically.

However, if the inflation target is to be set in terms of a headline CPI or a Japanese-type core CPI, it should be considered as a target to be achieved in the medium-term. In the short-term, there are many fluctuations and one-off changes such as changes in terms of trade, changes in indirect tax, and changes in institutional arrangements that affect prices. These would only be averaged out in the medium-term. When the inflation target is set in terms of headline CPI or a Japanese-type core CPI, it is not desirable to commit to a certain time horizon in achieving such target.

If, on the other hand, central bank wants to commit to a certain time horizon, it should commit to a medium-term underlying inflation rate which excludes short-term and one-off changes. An example of this kind of an inflation rate is US-type core CPI.

As already mentioned, the decision to expand QQE by the BOJ should be praised in light of the weak macroeconomic performance witnessed. However, the logic employed by the BOJ shows that it is also an outcome of a commitment to realize both the target inflation rate in terms of a CPI that includes the impact of oil prices, and the timing of achieving the target rate. The issues related to this difficult dual commitment need to be resolved before the monetary policy faces another challenge in the near future.