What should we expect from “Suganomics”?
: A proposal

On September 16, the Diet elected Mr. Yoshihide Suga as the 99th Prime Minister of Japan. The twenty members of his cabinet were appointed on the same day and started their work of clarifying the policy agenda for the Suga administration.

Mr. Suga succeeds Mr. Abe who was known for Abenomics which aimed to bring the Japanese economy out of deflation. During his almost eight years in office, Mr. Abe brought about a drastic change to the economic policy that was in place and made some significant achievements. However, many are also left unachieved, and have been passed-on to Mr. Suga for him to work on.

The aim of this month’s column is to identify the economic issues that needs to be tackled by Mr. Suga and to propose the main theme for the economic policies to be pursued by the Suga administration or, in other words, the basic direction of “Suganomics”.

There are five important economic issues to be tackled by Mr. Suga.

First is to contain infections of COVID-19 by controlling human mobility until we can overcome it by the developments of vaccines and remedies.

What is needed to contain the spread of COVID-19 is to somehow bring down the effective reproduction number to below one. To that end, the government declared state of emergency in April and May, and, after its withdrawal, requested the people to adjust their behaviors to what is called a “new normal”.

The behaviors under “new normal” includes those that are going to stay. That is because COVID-19 provided us with an opportunity to find out areas where there was a great inefficiency. Take an example of telework. The forced engagement in telework made us realize that we have been wasting time (e.g. commuting time) and space (e.g. office space). Shifting to telework will benefit the employers with higher productivity and the employees with better balance between work and life. There are incentives to make such changes permanent.

On the other hand, the behavior under “new normal” includes those that are difficult to maintain. Refraining from activities such as travel, sports, parties is against the basic wants of the people. In these cases, especially when they are asked to refrain on a voluntary basis, people can reach their limit and gradually lose self-restraint. This seems to be the reason why a second wave of infections was observed in July (figure 1). It shows that, until COVID-19 is finally overcome, we will frequently have to introduce restrictions on human mobility. 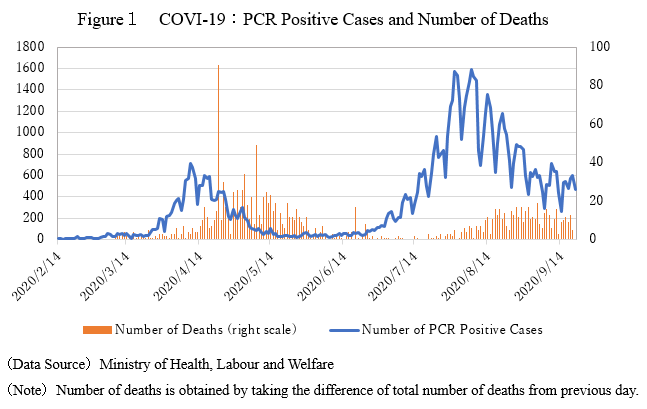 These actions by the government to restrict human mobility inevitably affect economic activities: profitability of firms is eroded significantly and incomes of employees and self-employed fall dramatically. It even reaches a situation where firms and individuals find it difficult to maintain business and daily lives. That is the reason why the government introduced two supplementary budgets to provide economic support measure such as cash transfers to individuals, and interest-free collateral-free lending to business. The government needs to stand ready to do whatever is necessary in order to support the economy while fighting the disease.

Even though the current measures were not sufficient and were also temporary in nature, they were enough to worsen the fiscal situation in a significant way. If the government faces a need to extend the existing programs and to introduce new measures, they are sure to worsen the fiscal situation further. Already being a country with the largest government debt among the OECD economies, there is a risk of losing the credibility to the investors. We will come back to this issue later.

Second is to suppress the reemergence of deflation resulting from the large negative output gap created by the counter-COVID-19 measures.

As a result of the weak economic activities, seasonally adjusted real GDP in the second quarter of 2020 fell by 7.9 percent (or by 28.1 percent in annualized terms) from the previous quarter, and the output gap (difference between real GDP and potential GDP) widened to more than 10 percent in the negative area (Figure 2). Since a negative output gap provides downward pressure on aggregate prices (we saw that in the global financial and economic crisis in the late 2000s), there is a high probability that we see a reemergence of deflation. 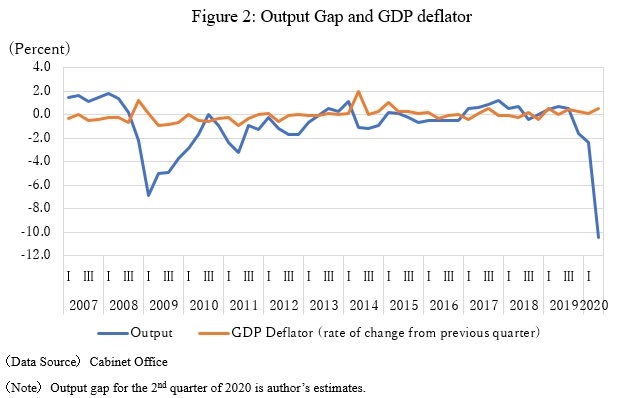 In order to reduce the negative output gap, we need real GDP to grow faster than the potential GDP. However, we can easily imagine that households will remain cautious leaving the private consumption to grow only modestly. Business investment is also expected to show a limited growth, especially in the non-manufacturing sector, because of the prospect of facing smaller market due to a shrinking population.

In such a situation, a lot would depend on fiscal and monetary policies. However, as we have already seen, there is a constraint on the fiscal policy. Once we have overcome COVID-19, we cannot afford fiscal policy to be so expansionary.

This leaves monetary policy to bear the burden. Monetary easing needs to be strengthened in order to provide better financial situation for consumption and investment to take place. Also, by preventing steep appreciation of the yen, it needs to support exporting firms to increase business in the recovering overseas market.

Third is to reinforce the fiscal consolidation program that is urgently needed to secure sustainability of government finance.

Soon after Mr. Abe took office, a medium-term fiscal consolidation plan was introduced with a target of achieving a primary surplus by FY2020, and to achieve a steady reduction of the government debt to GDP ratio thereafter. However, efforts were insufficient, including the postponement of consumption tax rate-hike twice, so that the target year had to be shifted forward to FY2025.

In addition, as we saw, COVID-19 forced the government to spend more and worsen the fiscal situation further. According to an estimate by the Cabinet Office, primary balance worsened from a deficit of 2.6 percent of GDP in FY2019 to a deficit of 12.8 percent in FY2020 (Figure 3). We need a fundamental review of the medium-term fiscal consolidation program. 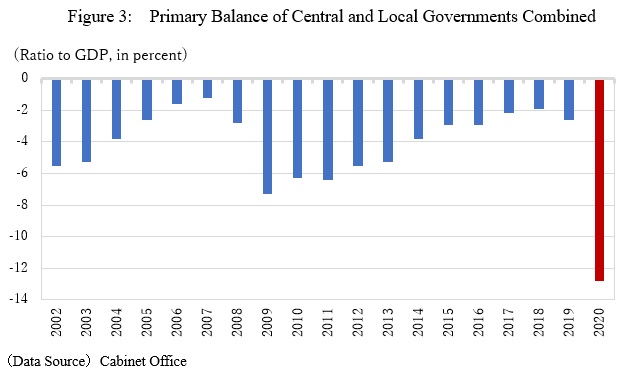 At present, Japanese government bonds are held by Japanese long-term investors such as the financial institutions. The interest rate on them is also held around zero by the Bank of Japan which is engaged in yield-curve control. Therefore, some suggests that we don’t have to rush to fiscal consolidation. However, we may see more foreign investors trading government bonds once the current account situation changes, in particular when current account turns into deficit. They may start to ask for higher risk premiums. Before such changes become apparent, we need to have a concrete program to reduce the primary deficit and bring government debt to GDP ratio under control.

Overcoming deflation means that monetary policy has achieved it inflation target of 2 percent. If that is the case, monetary policy would start to normalize the extraordinary policy measures that had been introduced (withdrawing QQE). Otherwise, the inflation rate will become higher than desirable (overshooting commitment of the Bank of Japan will allow some overshooting, but there should be a limit).

But if monetary policy is going to start normalization, fiscal consolidation needs to make a significant progress before it takes place. When monetary normalization starts it will mean a reduction of government bond holdings by the Bank of Japan and increase in interest rates, but these would, in turn, mean a greater burden on the government’s budget and a headwind for fiscal consolidation.

Fourth is to identify and accelerate the implementation of structural polices that are essential to raising the potential growth rate of Japan which is facing a headwind of aging and shrinking population.

For the economy to be strong enough to undertake fiscal consolidation and monetary normalization we need to have a high and resilient potential growth rate. However, the current potential GDP growth rate is estimated to be somewhat below 1 percent. The contributing factors to the low rate are low labor and capital inputs due to aging and shrinking population, and low total factor productivity (TFP) due to malfunctioning of economic systems and poor performance in innovation (Figure 4). 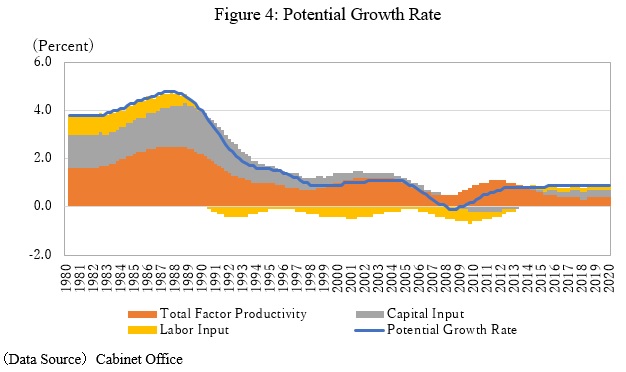 Therefore, a wide variety of structural policies need to be implemented. What is particularly important in this respect is to reform the Japanese economic system that has become outdated and has started to show malfunctioning: It is also important to address the negative implications of the aging and shrinking population.

In this respect, COVID-19 has provided us with an opportunity to accelerate the necessary reforms.

For example, one of the important areas that requires reform is the Japanese employment system which asks the workers for an unlimited commitment in exchange for a lifetime employment. The widespread of telework is encouraging the shift towards a system with clear job description and the review of pay scale and allowances. If the reform of the Japanese economic system is accelerated and more efficient use of human resources can be achieved, it should raise the productivity of the Japanese economy.

Also, if telework is expanded, it would support increase in the participation rates of females and the aged. This would help business in securing workers in a situation where the population is shrinking.

During the past years, Brexit and US-China trade friction has revered the trend of greater interdependency. Globalization was further overturned by the reactions of the governments in trying to counter COVID-19 by restricting movements of goods and people beyond borders.

We should not forget, however, that globalization is important for economic growth. Globalization will enable economies to make use of the resources in a more efficient way and will provide incentives to engage in innovation. It enables us to raise the potential growth rate.

Fifth is the need to restrain widening of inequality that may result from the promotion of globalization and innovation.

This may have not been emphasized by the Abe administration. However, we need to address inequality issues more aggressively because inequality in Japan is already relatively high among the OECD economies (Figure 5). If we succeed in implementing policies to promote globalization and innovation, we should be seeing more pressure on jobs and wages so that inequality would widen. 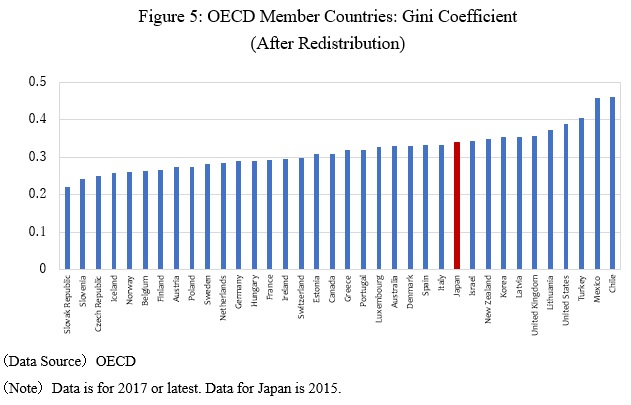 Keeping inequality low is important for the happiness of the people and stability of the society. However, this should not be taken as a denial of globalization and innovation. What we need is to promote globalization and innovation and enjoy the benefits and, at the same time, restrain inequality so that it would not widen. To this end, we need to introduce measures to minimize the negative impact on equality.

More specifically, we need to establish a system to secure jobs by improving the education and training systems so that workers can attain and improve the skill needed. This will help in preventing widening of inequality ex ante. However, if that turns out to be insufficient, we need to combine tax and transfers to strengthen redistribution so that we can rectify the situation ex post.

By restraining inequality from widening, people will be able to enjoy more evenly the fruits of the economic growth driven by the dynamic incentives provided by globalization and innovation. If you call it a “dynamic and inclusive economic growth”, that is what we should aim for in the long-term.

Aiming for a dynamic and inclusive growth implies that we have to reform tax and social security systems. It is not an easy task and will certainly needs time. However, we are about to engage in fiscal consolidation which requires review of both expenditure and revenue arrangements any way. We can make use of this opportunity to overhaul our redistribution system.