What the New Demographic Data Tell Us

New interesting demographic data have been published in the recent months.

The other is the Abridged Life Tables for 2014 also published by the MHLW in July 31. It showed that the life expectancy at birth for females was 86.83 and that for males 80.50. Both are an increase from 2013 when the number of years was 86.61 and 80.21, respectively. Both females and males renewed the record highs of the longevity for Japan.

Are they in line with the assumptions underlying population projection?

We know that the population of Japan has been shrinking. We also know that the trend is going to continue in the future, and, as a result, it is expected to drastically change the shape of the nation socially and economically. One of the important information in that respect is the Population Projection for Japan provided by the National Institution of Population and Social Security Research. It projects that the population of Japan, which is 128 million in 2010, is expected to decline to 87 million in 2060, and further to 43 million in 2110.

It should be noted, however, that the figures of the projection cited above are those of the standard case projection which is based on the assumptions that both fertility and mortality rates follow the medium rate scenarios. There are two other scenarios for both the fertility and mortality rates, high and low. Since the Population Projection, which has been revised every 5 years, has a track record of being too optimistic in the past, it is important to check whether the recent numbers are consistent with the standard case assumptions.

Figure 1 plots the actual fertility rate, including the most recent one mentioned above, against the assumed rate up till 2020 (rates after 2021 have been omitted). It shows that the actual rate is roughly consistent with the medium rate scenario, if not somewhat higher than assumed. 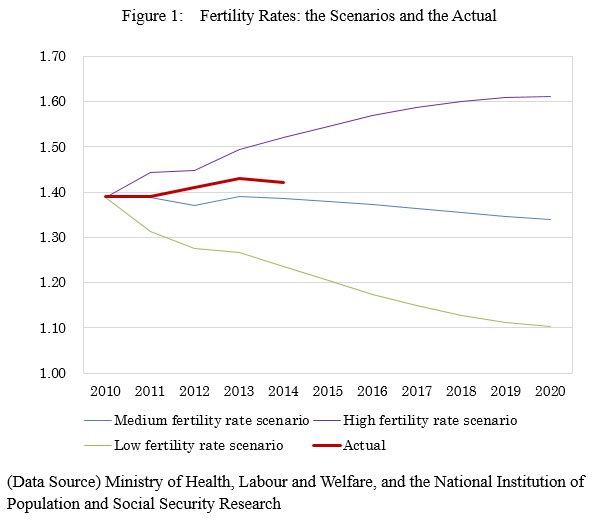 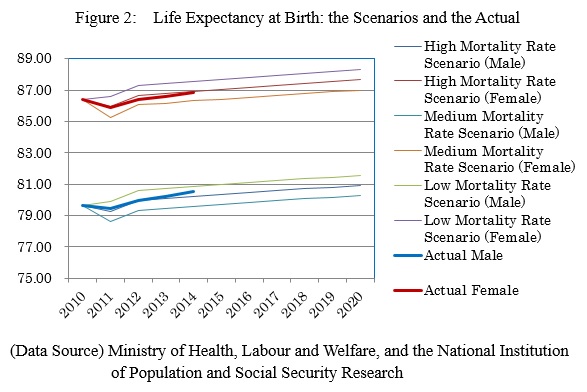 To sum up, the recent data tend to confirm that the population decline can be expected to take place as the standard case (a combination of medium fertility and mortality rate scenarios) shows. The policy responses should be designed and implemented accordingly.

Changes in participation rate between 2010 and 2014 can be seen in Figure 3. It shows that it has increased during the period in the age groups of 30s and 40s: The M-shaped curve has been alleviated somewhat. It suggests that the improvement in the fertility rate took place hand in hand with the increase in participation rate of females. 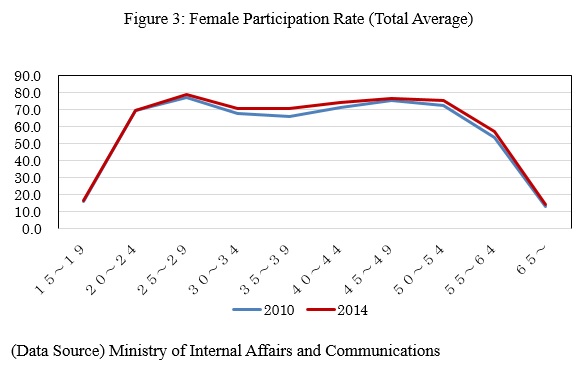 As a matter of fact, Figures 4 and 5 confirm that increase in participation rate took place not in the unmarried females, which is already significantly high, but in the married females, where there is still a room for more improvement. 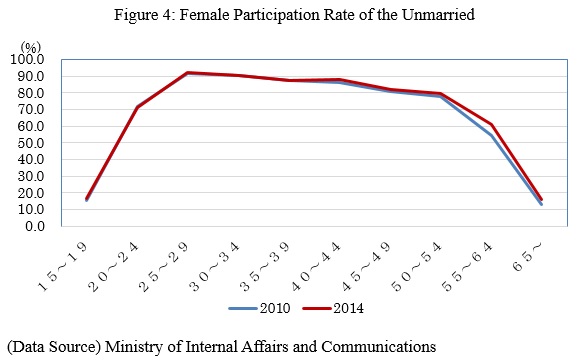 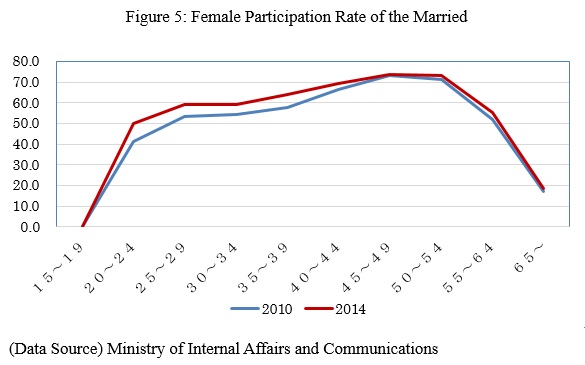 While the population is still heading for a long-term decline, the recent developments in the fertility rate and female participation rate show changes are taking place in the right direction; a very limited, but a steady, signs of improvement in the child bearing environment that does not sacrifice employment. Policies should be strengthened more significantly and more rapidly to further improve the work-life balance situation.