Whatever Happened to the Portfolio Rebalancing Effect?

Introduction of a QQE with yield curve control

On September 21, the Bank of Japan announced a new monetary policy framework called the “Quantitative and Qualitative Monetary Easing with Yield Curve Control”.

The most important point of the announcement was the shift of the operational target of the monetary policy from monetary base to yield curve: while maintaining the negative interest rate policy as a measure to control short-term interest rate, the new commitment was to also control the long-term interest rate so that it will stay at around zero.

In addition, they announced that the current policy will be maintained until the observed CPI (excluding fresh food) inflation rate exceeds the 2 percent target in a stable manner. It implies that overshooting of the inflation rate is allowed to take place, when the lagged impact it may have on the inflation rate to rise above the target rate is taken into account. The latter commitment is called the “inflation-overshooting commitment”.

A need for an assessment of the portfolio rebalancing effect

In introducing the new framework, BOJ made a comprehensive assessment of the developments of the economy and prices and the effects of the monetary policy so far. It was a thorough and detailed study. However, the review did not contain any study of the portfolio rebalancing effect of the QQE. It is interesting because portfolio rebalancing effect was one of the major channels through which the QQE was considered to have impact on the economy and prices.

In April 2013, at the time when he initiated the QQE, the Governor of the Bank of Japan, Mr. Kuroda, elaborated on the channels that the new monetary policy framework would have. They were; (a) encouraging a further decline in long-term interest rates, and lowering risk premia of asset prices, (b) promoting portfolio rebalancing effect which would increase investment in risk assets and bank lending, and (c) drastically changing expectations of markets and economic entities (cf. Mr. Kuroda’s speech made on April 12, 2013).

Of the three effects mentioned above, (a) and (c) can also be achieved by measures other than the purchase by the BOJ of government bonds and other securities. In this sense, portfolio rebalancing is the most distinct feature of the QQE. It should have been natural to check how portfolio rebalancing had actually showed up.

Let us check for ourselves whether QQE actually had resulted in portfolio rebalancing.

Since the QQE mainly works through the commercial banks, we will look at Figure 1 which shows how the assets in the balance sheets of the banks have developed in the past five years. 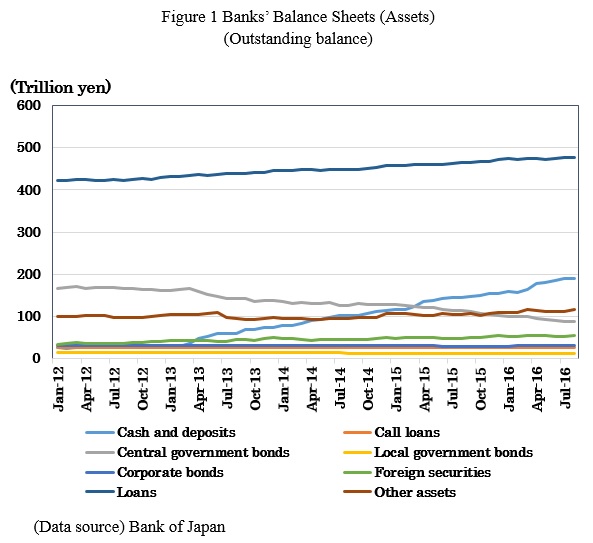 It shows that holding of central government bonds have started to fall, and cash and deposits have started to rise, both since the introduction of the QQE. It reflects the BOJ’s purchase of the government bonds from the banks, and the payment made by the BOJ to their current accounts at the BOJ. On the other hand, the outstanding balance of loans and securities like corporate bonds and foreign securities have only shown a modest increase at a pace not so much different from pre-QQE days.

The observation can be confirmed more clearly by Figure 2. It shows the changes in the outstanding balance of the assets over the previous year. In exchange of the fall in central government bonds, cash and deposits have been increasing. However, responses in loans and other risky assets have been limited. 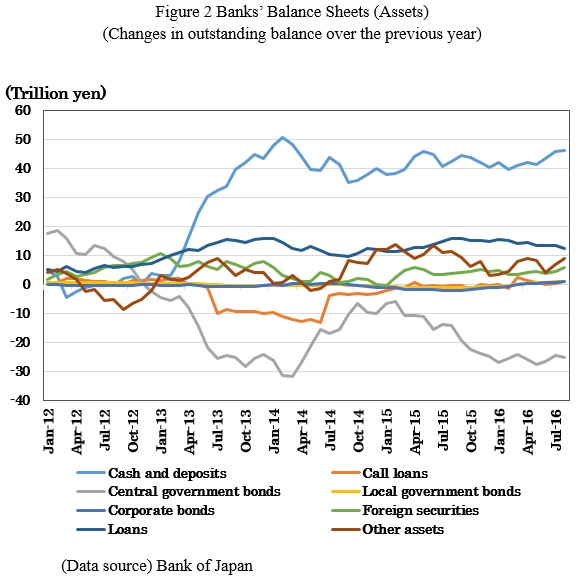 Reasons for the limited effect of portfolio rebalancing

The reasons for the limited effect of the portfolio rebalancing on banks’ balance sheets may lie on both the lending attitudes of the banks and the borrowing needs of the firms.

The lending attitudes of banks have undoubtedly improved, as the results of the Tankan survey shows. However, it hasn’t improved as much as we hoped to see in view of the extraordinary provision of monetary base and the negative interest rate policy that have taken place so far. It may reflect the hesitance of the banks in taking more risk.

The borrowing needs have also been weak. In spite of the low interest rate, private business investment has only shown a modest increase. The perceived shrinking of the domestic market due to the decline in population may be affecting the firms’ investment decisions.

It suggests that portfolio rebalancing effect would not show its full impact if purchase of assets are mainly done thorough banks. It also suggests that it would not show its full impact if monetary easing is not accompanied by structural policies. The current situation calls for a further innovation in the area of monetary policy (e.g. purchasing more assets directly from the market), as well as a strong initiative in the area of structural policies.

The new monetary framework introduced in September is the BOJ’s latest response to the call for innovation in monetary policy. The limited effect of portfolio rebalancing could be one of the reasons why operational target has been shifted out from quantitative easing into interest rate control.

However, the yield curve control, while interesting, has its problems.

We need to watch carefully the risks as well as the potential that the new monetary framework may have.