Why Diversity is Difficult to Achieve in Japanese Firms: The Case of Returnees

Need of diversity in Japanese firms

Generally speaking, firms tends to have uniformity in its workforce. It has been particularly true for Japanese firms. They used to consist exclusively of young Japanese males.

However, in the recent years, importance of diversity has been widely acknowledged. The idea is that having more females, the aged, foreigners, and the handicapped within the firm is more desirable. It is considered to be the case, not only because people’s right to participate in the society should be respected, but also because it rewards the firms by raising their productivity.

Why would enhancing diversity raise productivity of the firms? In the following, I would like to discuss this issue by referring to the case of having more foreigners in the workforce. In connection, I will also discuss the potential values of returnees (kikoku-shijyo in Japanese) for the Japanese firms, and the reasons for the firms’ failure in hiring them.

Benefits of having different information sets

A useful starting point is the argument provided by Edward P. Lazeer in his “Globalization and the Markets for Team-Mates” in the Economic Journal, March 1999.

If we use this framework to understand the lack of diversity in Japanese firms, we can explain it as being a result of cost of overcoming heterogeneity exceeding the benefit of diversification. The high cost may come from the poor English ability the Japanese have in spite of the long time spent of English classes at schools, and from the inflexibility of the Japanese system in accommodating diversified categories of people.

The case of returnees

Japanese firms seem to have a problem with accepting foreign workers. If that is the case, how about providing more opportunities to the Japanese children who accompanied their parents to spend some time abroad and have returned? Many of these “returnees” attended local schools in the countries where they lived so that they tend to have different information sets from those of the ordinary Japanese. However, they are also Japanese who understands Japanese and the Japanese culture, so the cost of overcoming heterogeneity should be lower.

According to the statistics provided by the Ministry of Education, Culture, Sports, Science and Technology (MEXT), returnees who are attending elementary, lower secondary, and high schools in Japan are as shown in Figure 1. 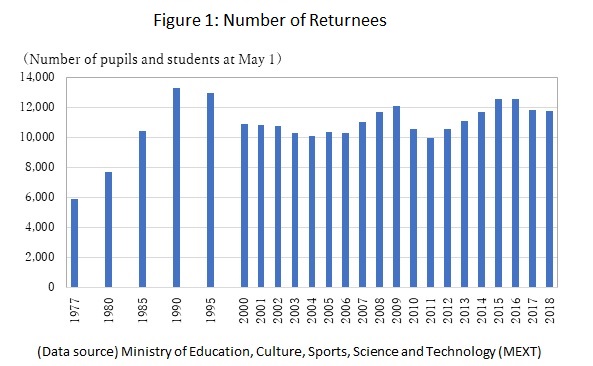 It shows that an average of 12 thousand pupils or students have returned to Japan every year. However, this does not tell whether they have returned after attending local or international schools in the countries they lived. All of them may not have different information sets.

Returnees, in many cases, should have attended schools in the country where they lived. Therefore, if we know the breakdown of the Japanese pupils and students by the type of schools they went, we will be able to know the number of potential returnees with different information sets. The number of Japanese pupils and students going to elementary and lower secondary schools abroad are shown in Figure 2. 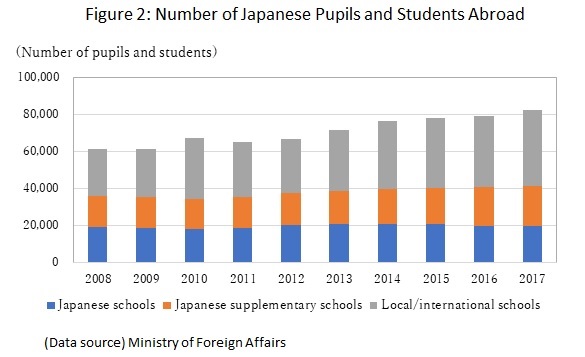 It shows that potential returnees have increased gradually, and is now about 80 thousand pupils or students. Among them, those who are going to local/international schools are about 40 thousand. We can regard them as the stock of potential returnees with different information sets.

So far, we have been looking at returnees. However, in terms of the information set that they have, Japanese children going to international or ethnic schools in Japan may be equivalent to returnees. They are studying at the schools what they may have learnt if they were abroad. If we are interested in Japanese having different information sets, they should also be taken into account.

There doesn’t seem to be a periodical survey of these children, but a survey done by NEXT in May 2005 shows that Japanese children who went to international or ethnic schools at kindergarten, elementary, lower secondary, or high school level in Japan add up to 5918, about 20.9 percent of the total children going to such schools.

Japanese pupils and students studying at international of ethnic schools in Japan, as well as the returnees that have attended local/international schools, should have different information set in the sense that they have received a different education compared to Japanese that went to ordinary Japanese schools. If that is true, a firm should benefit from having them in their teams as much as they benefit by having foreigners. In addition, the fact that they are Japanese familiar with the Japanese language and the culture, cost of overcoming homogeneity should be lower. As a result, Japanese firms should have relatively more of returnees who attended local/international schools and/or Japanese who went to international or ethnic schools in Japan (in the following, the term “returnees and equivalent” will be used to cover both categories).

Japanese employment system as an obstacle to diversity

The inference turns out to false. Japanese firms do not have many returnees and equivalent in their workforce. Factors that prevent them to have more of them seem to lie in the employment system specific to post-war Japan.

First, Japanese firms do not have clear job description. In exchange for lifetime employment, Japanese firms have discretion over how and where their employees work. It means that a person would not know what she will be doing after joining the firm. She may end up doing something that may not be making use of her knowledge or skill. If that is the case, it is natural for the person, who think that she has useful information set, not to choose Japanese firms as their employer.

Second, even if he is lucky enough to land on a job that he thinks would make the most of his knowledge and skills, there is no assurance that he will be rewarded with a premium wage over others. That is because Japanese firms employ seniority-based wage system that pays wages equally among the workers who have joined the firm in the same year. What is important is their seniority and not necessarily productivity. It is again natural for a returnee or equivalent to look for employers other than Japanese firms.

What is important is the difference in people

Including foreigners or returnees and equivalent in the team have merits in undertaking tasks and raising productivity. However, the merits need to be balanced with the cost of overcoming heterogeneity. It is only when the merits exceed the cost that firms actually see benefit in hiring foreigners or returnees. Therefore, it its natural for the firms, and the government that tries to create a favorable environment for the firms, to try to reduce the cost of overcoming heterogeneity.

But we need to be careful in how we try to reduce the cost of overcoming heterogeneity. One mistake that we tend to make is to try to eliminate the difference and assimilate. This solution is not appropriate because it would eliminate the important difference in the information sets that they have. It is important to remind ourselves that the value of diversity comes, not from the similarity, but from difference in people.