Why does employment lag behind business cycles in Japan?

US reached its peak in business activity in February 2020

In June last year, the Business Cycle Dating Committee of the National Burau of Economic Research (NBER) announced that the “committee has determined that a peak in monthly economic activity occurred in the US economy in February 2020. The peak marks the endo of the expansion that began in June 2009 and the beginning of a recession.” It also announced that “a peak in quarterly economic activity occurred in 2019Q4. Note that the monthly peak (February 2020) occurred in a different quarter (2020Q1) than the quarterly peak.”

According to their explanation, the judgement of the monthly peak was based on payroll employment measure, employment measure from household survey, personal consumption expenditures, and real personal income less transfers (Figure 1). On the other hand, the judgement of the quarterly peak relied on real GDP and real GDI, as well as on quarterly averages of the monthly indicators mentioned above. 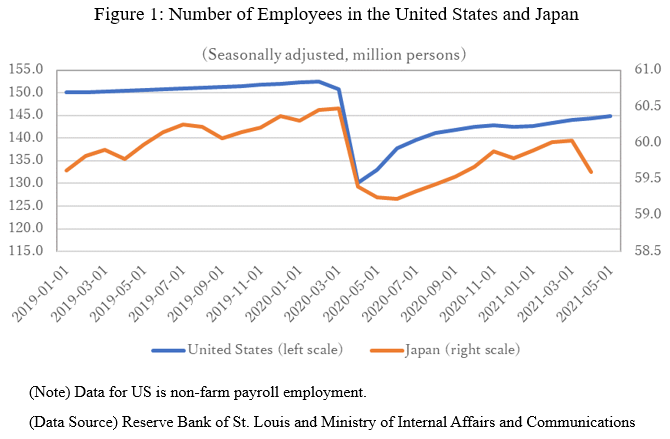 It was interesting to find that the US economy had not peaked until February 2020 despite the trade tension between China that intensified in 2018: Japanese economy was greatly affected by the trade war and its business cycle peaked in October 2018 and had been in a recession since then. But what was more interesting, and what is going to be picked up in this month’s column is that, in the case of US, employment, consumption, and GDP are considered to move along with the business cycle, i.e. considered to be “coincident indices.” In Japan, these are considered to be “lagging indices.” Why is there such a difference?

The composite index (CI) published by the Cabinet Office, which tries to identify business cycles in Japan, consists of three indices: leading, coincident, and lagging indices. Each index is compiled on the basis of a number of economic indicators.

Among the indices that are used to compile the “leading index,” new job offers (excluding new graduates) is included as one of the thirteen indicators used. As for the “coincident index,” it includes, among others, the index of labor input (all industries) and effective job offer rate (excluding new graduates). The former indicator is obtained by multiplying the number of employees (excluding agriculture, forestry, and fisheries) by average working hours: its movement reflects the changes not only of employment but also of working hours.

In the case of the “lagging index,” the indicators that are used to obtain the index includes the following:

It includes a couple of important labor market indicators, regular worker employment and unemployment rate, as well as the two main private sector demand components of GDP, business expenditures for new plant and equipment, and household living expenditure. The latter suggests that GDP is a lagging index for business cycles in Japan.

Differences in the employment system in the two countries

Why are employment indicators and GDP coincident indices in the US while they are lagging indices in Japan? The difference may come from the differences in the adjustment taking place in the labor market in the two countries.

However, the response in unemployment rate was quite different: in the US, it shot up from 4.8 percent in March to 14.7 percent in April and then started to fall thereafter, while, in Japan, it started to rise from 2.4 in January, but only gradually, and reached its peak of 3.1 percent in October (Figure 2). 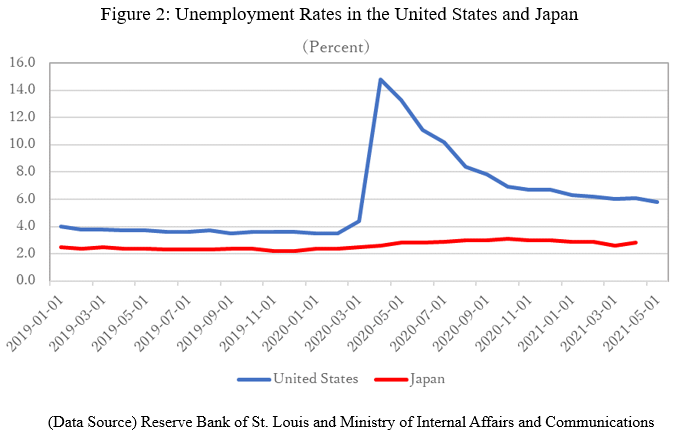 The difference in the labor market adjustment reflects the different employment system the two countries have.

In the case of Japan, since lifetime employment system is in place, firms do not lay off workers easily: they first make adjustment in new job offers and working hours and then increase workers on leave. When they have to reduce employment, contracts with non-regular workers are terminated. Reducing the employment of regular workers is left as the last resort. (For a discussion on the labor market adjustment taking place in Japan under COVID-19, please see https://www.jcer.or.jp/english/labor-market-adjustment-under-covid-19.)

It explains why employment measure in the US is regarded as a coincident index while, in Japan, data on new job offers are included as a basis of the leading index and those on working hours are included as a basis for coincident index, but data on employment of regular workers are one of the series used to compile the lagging index. It would also explain why consumption is slow to be affected by the business cycles: impact on household income takes place only with a lag.

Merits and demerits of the Japanese employment system

What are the merits and demerits of the Japanese system?

Obviously, the ability to providing stable employment to workers is a merit. It would also lead to political stability and less need for unemployment benefits.

However, it should be borne in mind that maintaining employment in recessions is not costless. Labor’s share in GDP increases rapidly in recessions and squeezes profits (Figure 3). That is why, in order to support the firm in trying to maintain employment by putting workers on leave, the government subsidizes firms’ payroll through the employment adjustment subsidy program. 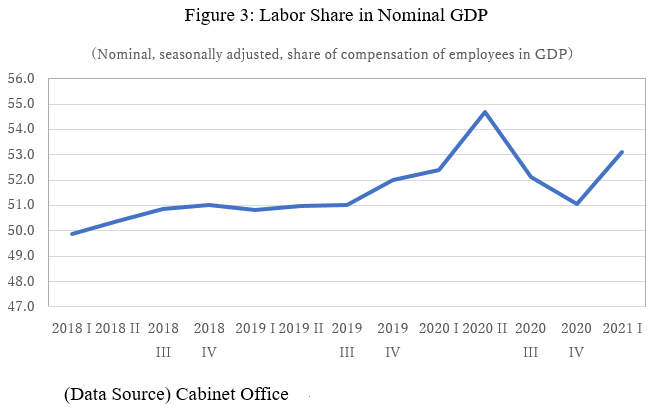 It may also have a long-term implication as well. Since there is a huge reservoir of workers within firms, they tend to rely on internal labor market when they need workers for a new business area. However, it may be the case that the existing work force do not have the appropriate knowledge and skills for the area. This constraint may put a limit on the competitiveness and the profitability of the firm, and also the growth potential of the Japanese economy in the long-term.