Why is Japan’s inward FDI so low?

In May, it was reported that the stock of inward foreign direct investment (FDI) to Japan at the end of 2016 rose to a record high of 27.8 trillion yen, a 12.4 percent increase over the previous year.

However, compared to other OECD countries, the ratio of stock of inward FDI to GDP is extremely low; in fact it is the lowest among the member countries, at about 5.2 percent (Figure 1). The highest is Ireland at 285.5 percent, followed by the Netherlands, Chile, and Belgium, all at around 100 percent. 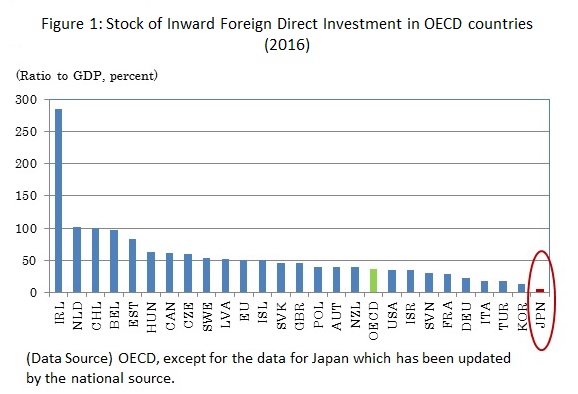 The low level of inward FDI is a concern because inward FDI provides a number of benefits to the receiving country. Here, I would like to mention two of its important benefits. 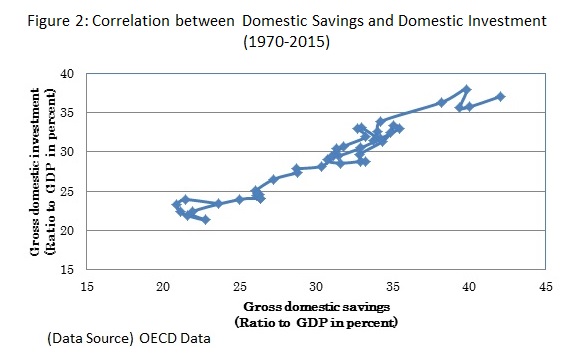 Foreign direct investment into Japan would provide more competitive pressure to the economy. It should lead to more efficient use of resources and, thereby, higher productivity.

In addition, foreign direct investment often involves introduction of new innovative products and game-changing business models. Transfer of these new ideas, as well as their positive impact on innovation in Japan, should also lead to higher productivity.

From the point of view of these benefits, the low level of inward FDI, as is currently witnessed, is problematic. Ways to stimulate FDIs coming into the country needs to be considered and implemented.

Direct regulations against inward FDI is less of a problem

In order to come up with a solution to stimulate inward FDIs, we need to identify the factors that discouraging them.

It is important, in this respect, to confirm that direct regulations against inward FDIs is not that significant in Japan.

According to the Foreign Exchange and Foreign Trade Act, most of the inward foreign direct investments are subject to after-the-fact report only. Exceptions are those industries that are subject to prior notification due to (a) national security, (b) public order, (c) public safety, (d) smooth operation of the economy, and (e) reciprocity reasons. However, these are in conformance with the Codes of Liberalisation of Capital Movements set by the OECD.

In addition, there are certain restrictions that are introduced by legislations that govern certain industries, such as telecommunications, broadcasting, and air transports: However, they are, in many ways, similar to the ones adopted by other countries as well.

The fact that the direct regulations currently in place is not that significant can also be confirmed by the OECD’s FDI Regulatory Restrictiveness Index. It tries to measure statutory restrictions on FDI. (It should be noted, however, that the Index does not take into account the implementation of FDI rules or the implications of state ownership.)

According to the Index for 2016, Japan places at about the middle of the OECD member countries, and somewhat better than the OECD average, in terms of the openness to FDI (Figure 3). 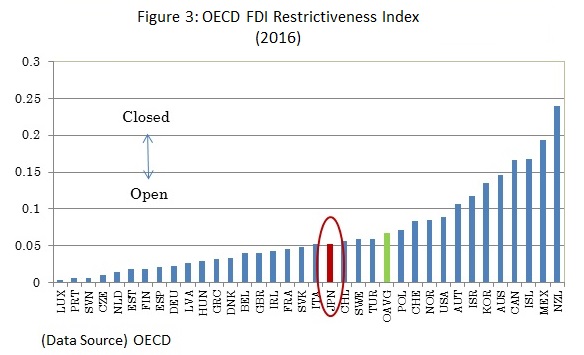 While there are certainly issues that need to be addressed in order to further improve openness, the above observations lead us to think that domestic regulation is not the major reason why FDI is so low in Japan.

Business environment in general is more of a problem

That leaves the low level of FDI to be explained by non-direct regulation factors.

The factors that are considered by foreign firms to be important in this respect can be found, for example, in the Report by the Experts Meeting on Foreign Direct Investment to Japan published in April 2014. It is based on discussions by Japanese experts with the foreign firms and business organizations operating in Japan.

The major problems that are mentioned in the document are (A) the low profitability, and (B) the high costs, that face foreign firms when they start business in Japan. The former is related to; (a) the domestic regulation and customs that are special to Japan; (b) the rigidities in the labor market; and (c) the lack of workers with sufficient talents. The latter covers such costs as; (d) operating costs, including energy, distribution, safety and quality costs, (e) corporate tax, and (f) costs of paperwork necessary to conform to the domestic regulation and taxation.

These factors, in many ways, overlap with those factors identified by the World Bank’s Ease of Doing Business Ranking. The Ranking intends to provide objective measures of business regulations and their enforcement.

According to the Ranking, Japan places at 34th among the 190 countries covered, and at 25th among the OECD countries. The areas that Japan lags behind the world standard include; starting a business, dealing with construction permits, getting credit, and paying taxes.

What is important to note here is that these problems do not apply only to foreign firms. It also applies to Japanese firms as well: Japanese firms also have to deal with these problems. As a result, even the Japanese firms find it difficult to start business in Japan, as the low level of startups in Japan shows (Figure 4). Even those who successfully start a business and manage to stay in the business, they often have to endure low profitability, which also make it unattractive for foreign firms to invest in Japan. 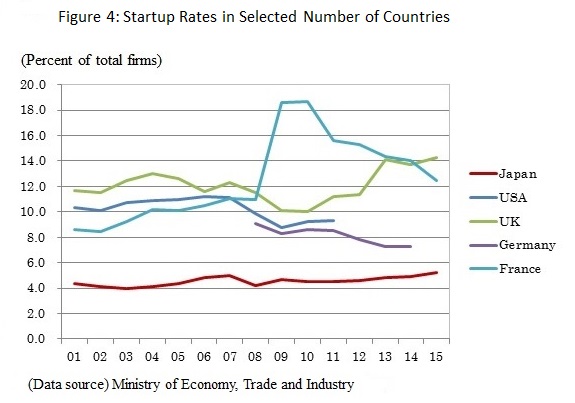 What we have seen implies that Japan’s level of inward FDI is low not because of the direct regulation that prohibit foreign firms to invest in the Japanese market, but because of the current Japanese business environment that makes it difficult for any firms, including the Japanese, to do business in the country.

Therefore, what is necessary to stimulate inward FDI is to make the Japanese business environment more friendly to firms and entrepreneurs in general. When this is achieved, foreign firms, together with the Japanese firms, should be investing more in the Japanese market.