Why Was Japan Struck So Hard by the 2008 Crisis?

Ten years has passed since Lehman Brothers collapsed in September 2008. As we all know, the unexpected exit of the investment bank threw the global economy, which was already feeling the impact of the subprime mortgage problem, into a deep recession.

Japan was relatively immune from the financial impacts of the subprime mortgage problem. It was because Japanese banks did not have much of the RMBS and CDO in their portfolios. In this respect, there was never a financial crisis in Japan during this period.

However, the Japanese economy suffered from a serious and sharp recession. In fact, the drop in real GDP during the period was much larger than that of the United States, the origin of the crisis.

In this month’s column, I would like to review Japan’s experience during the 2008 crisis and discuss the reasons behind it.

Larger drop in GDP than in the United States

The profile of GDP before and after the collapse of the Lehman Brothers which we hereafter call “Lehman shock” is shown in Figure 1. Taking the real GDP at 2008Q1 as 100, it shows that the real GDP of Japan fell much steeper than that of the U.S. and has also been slower in recovering the pre-Lehman shock level of GDP.

Figure 1: Real GDP of Japan and the United States 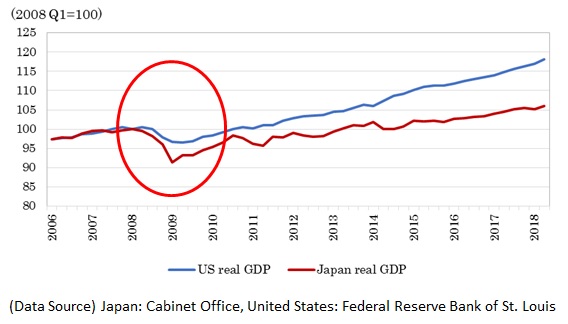 The difference in the impact of the Lehman shock can also be seen when we look at Figure 2 which shows the real GDP growth rates of the two countries during the same period. It shows that real GDP fell by -1.3 percent, -2.3 percent, and -4.9 percent in 2008Q3, 2008Q4, and 2009Q1, respectively. The fall in real GDP in the three quarters were all larger than the fall in real GDP during the same period in the United States. 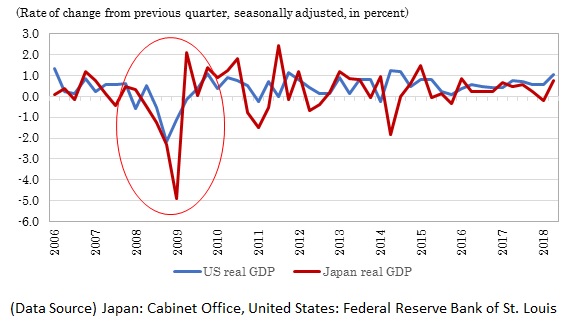 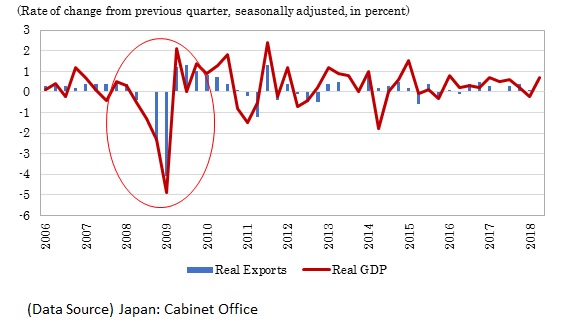 Japan’s real exports is considered to have fallen steeply because of the following reasons:

First, the financial crisis in the United States raised the uncertainty surrounding the future economic prospects and led the households to postpone purchase of non-necessities, such as motor vehicles and electrical appliances. Since these products and their parts were the main exports of Japan to the United States, it led to the large decline of Japanese exports.

Second, appreciation of the yen had been taking place since the outbreak of subprime mortgage problem accelerated after the Lehman shock. Yen/US dollar exchange rate was above 124 in June 2007, but appreciated to 108 in August 2008, before appreciating further to below 90 by December. Such an appreciation discouraged exports during the period.

Third, the financial market stalemate that resulted from the Lehman shock limited the availability of trade finance. International trade was curtailed by the reduction of financing.

The fall in Japanese exports, which was a part of the Great Trade Collapse during the period, had a serious impact on the Japanese industries and the workers. It was particularly the case because of the composition of the Japanese exports. The products that were affected were those that had wide range of industries that supported them by providing intermediate goods. The fall in production in exporting industries inevitably led to a fall in production of those industries as well.

Figure 4: Composition of Exports in 2008 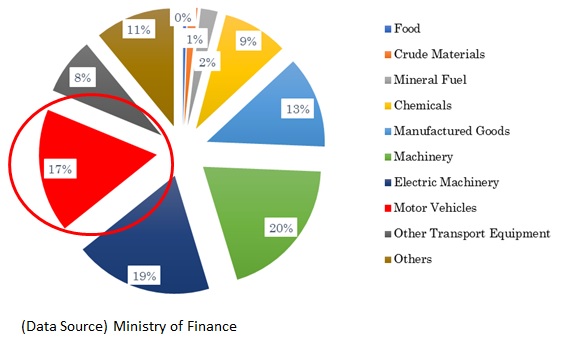 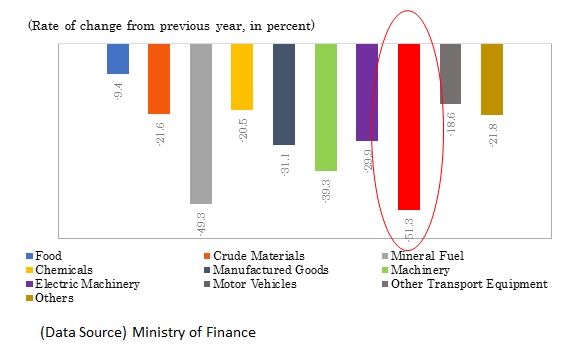 From these reasons, reduction in exports of motor vehicles had a large impact on the economy, leading to a significant drop in real GDP.

In contrast, limited impact on employment

While the impact of the Lehman shock on real GDP was significant, its impact on employment was surprisingly limited. In stark contrast with the rapid rise in unemployment in the United States from 5.0 percent at the beginning of 2008 to 10.0 percent at its peak (October 2009), the rise in Japan was from 3.9 percent at the beginning of 2008 to only 5.5 percent at its peak (July 2009). As Figure 6 shows, the increase in the rate was significantly different and completely the reverse of what would be expected from the impact on real GDP.

Figure 6: Unemployment Rates in Japan and the United States The difference is mainly due to the lifetime employment system that exists in Japan. Japanese firms are generally reluctant to make workers redundant and makes maximum effort to keep them on the payroll.

At the same, after Lehman shock took place, the government supported the firms by relaxing the conditions to be met in order to qualify for the employment adjustment subsidy program: The program subsidized a part of the wage that a firm has to pay (3/4 for large firms, and 9/10 for small- and medium-sized firms, after March 2009) if the firm keeps the workers on the payroll even though there may be no work to do, by training them or giving them a leave. 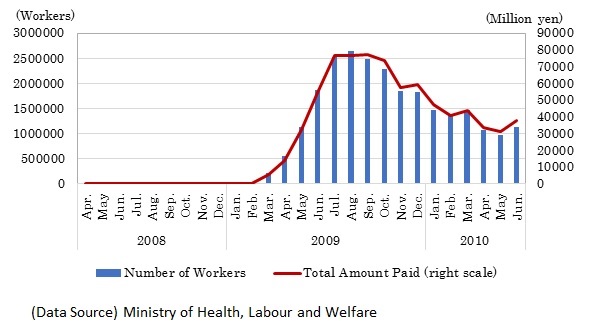 Lehman shock in 2008 revealed the vulnerability of the Japanese economy to external shocks. It was mainly because of the weakness of domestic demand, particularly that of private consumption.

The experience shows that, if we are to be more resilient to external shocks, we need to have stronger domestic demand and a more diversified industrial structure. The limited achievement during the past ten years suggests that we still have much to do in these fronts.