Widening of Inequality in Japan: Its Implications

Is inequality widening in Japan?

Since the publication of Thomas Pikkety’s book, the issue of inequality has come into the spotlight. Looking at data such as the income share of the top percentile income earners, he argues that many countries have seen a widening of inequality. The reason according to him was the large amount of compensation that super managers received and the growing wealth that are accumulated through inheritance, and through high return on the financial assets. It is considered to be applicable to USA and the developed European countries. In comparison, Japan was seen as an exception, witnessing only a limited widening of inequality, as can be seen in Figure 1. 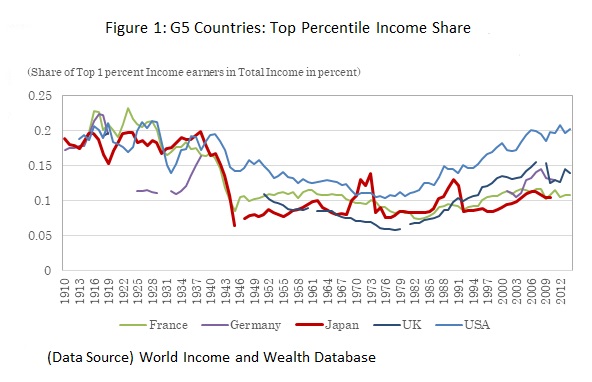 However, observers who focus on other indicators point out the evidences that show a widening of inequality is also taking place in Japan.

This month’s column examines the data provided by OECD and others to see whether a widening of inequality has actually taken place in Japan, and what is the implication of the situation.

In the aggregate, widening of the inequality seems to be limited in Japan

There are number of indicators about inequality that can be obtained from OECD. They include Gini coefficients and relative poverty rates. 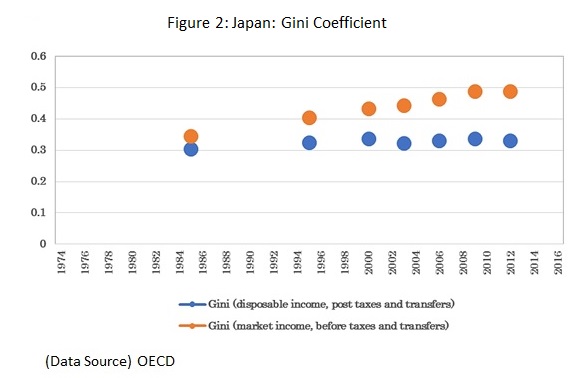 As a result, as Figure 3 shows, the Gini coefficient after redistribution for Japan is only slightly higher than the median, considerably lower than the United States and the United Kingdom. 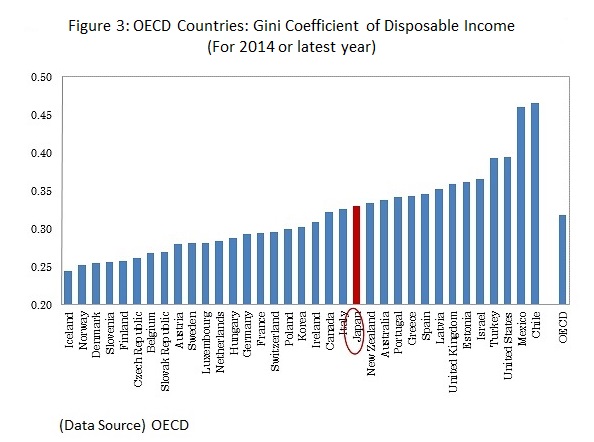 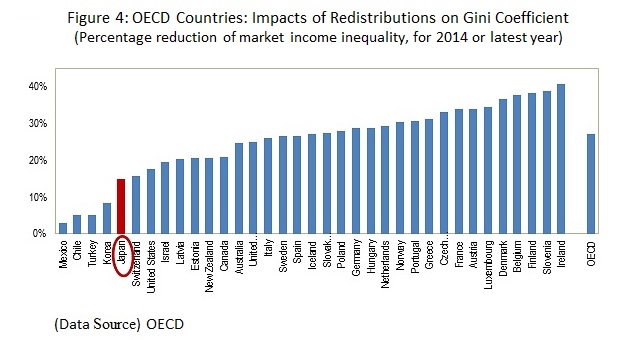 Among the income redistribution measures, Japan’s feature is that it depends more on transfers rather than taxes. The improvement in Gini coefficient is much more significant for transfers than taxes, as Figure 5 shows. 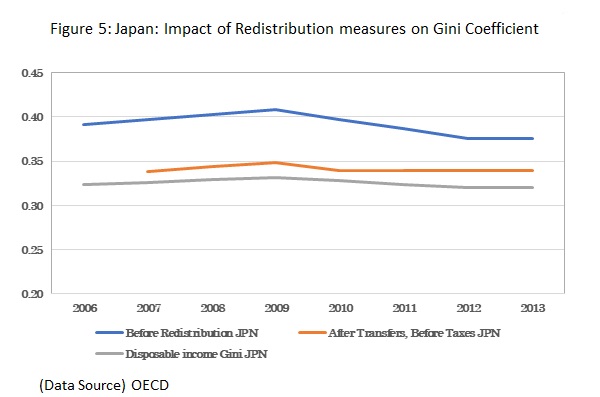 However, the situation looks somewhat more serious if we compare the rate with other countries. As Figure 7 shows, among the OECD member countries, Japan belongs to the group where the relative poverty is high, close to the United States, and much higher than the United Kingdom. 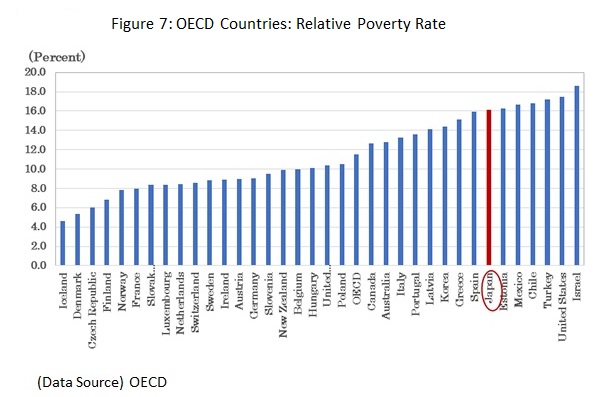 The reasons for the high relative poverty rate in Japan

The high relative poverty rate has been examined closely by researchers. The main factors that has been identified are the following.

In passing, it should also be noted that, while the rates are relatively high, they haven’t risen in the recent years: It is probably because of the redistribution taking place through transfers, i.e. pension benefit payments. 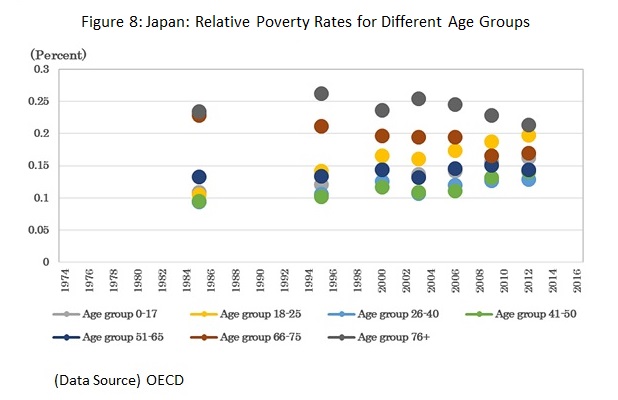 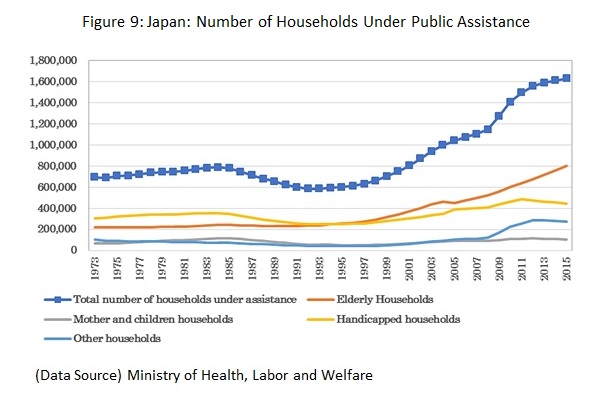 Second is the increase in non-regular workers. They are paid less than the regular workers. Since their share in total employees are rising, reaching almost 40 percent in FY 2016, relative poverty rate should be rising.

The rise in the relative poverty rate in the age group of those between 18 and 25 should be, as shown in Figure 8, reflecting this kind of a trend. It could be that the impact of this development may be limited. That is because the population belonging to this age group is falling due to the aging and the shrinking of the population.

Third is the increasing poverty in single parent households. Divorce rate has risen in the recent years (the number of divorce has increased by 31 percent during the thirty years to 2016). As a result, it has led to an increasing number of single parent households, particularly single mother households. Since they have to rely more on non-regular work, their relative poverty rate is high.

The discussion above shows that the inequality issues are becoming more and more serious in Japan. Policies to address the problem should be strengthened: safety nets need to be improved to support those who are in need.

As we have already seen, the income share of top percentile income earners have not increased much as in other countries, especially the United States and the United Kingdom. Widening of the inequality is not because the rich has become richer.

In addition, there is a difference in that, in Japan, the inequality in the prime age workers have not increased. Looking at Figure 8 again, we can see that the age groups of those between 26 and 40, 41 and 50, and 51 and 65, are rising but only modestly compared to other age groups. Widening of inequality is taking place because of increase in poverty in certain groups among the middle and low income earners.

Where does this difference come from? It is difficult to understand that if technological changes and globalization have taken place, like other countries such as the United States and United Kingdom, it should have led to a high level of inequality like in those countries.

There are two possible answers to this question.

One is that the Japanese polices have been successful enough to put a cap on the rise in equality. Even if technological changes and globalization have taken place, active labor market polices in the field of providing sufficient education and training opportunities, and improving matching between potential employers and potential workers, might have offset the pressure to widen inequality.

However, public expenditure for active labor market policies in Japan is very low compared to other countries. As Figure 10 shows, Japan belongs to the group of countries with lowest spending together with the United States. Successful policies do not seem to be the answer. 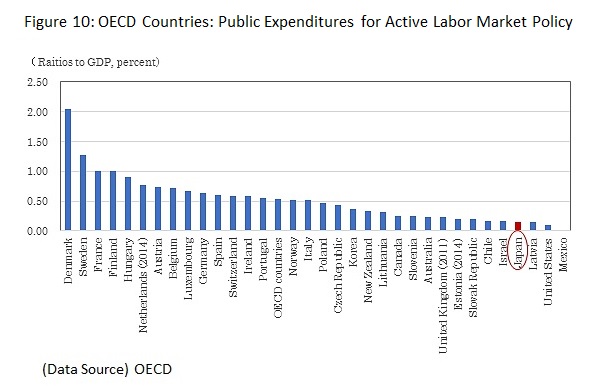 It leaves us with the other answer: Japan may have not been facing technological changes and globalization as in other countries.

The low growth in labor productivity in Japan does seem to confirm the slow progress taking place in Japan in adapting technological changes. The protection against imports in sectors like the agricultural sector, insignificant inward foreign direct investment, and restricted immigration also seem to confirm the limited exposure of Japan to globalization.

Overcoming the tradeoff: Can both growth and equality be pursued?

Widening of inequality is a serious threat to the society. There is no denial that it should be avoided as much as possible. If the cause is clear, we should eliminate it.

However, the solutions become complicated if the cost of eliminating the cause of the widening of inequality is to give up opportunities to grow.

If the growth prospects are to be improved, we need to transform the orientation of polices towards growth. And if that is the choice we are going to make, the new set of policies should include those that contribute to enhancing technological change and globalization.

However, the new policy orientation could lead to wider inequality, as we have argued. Therefor we need to complement the new set of polices for promoting growth by introducing another set of policies that would address the potential threat to the society. Improving education opportunities to acquire new skills, providing training opportunities to improve human capital that has become obsolete, and strengthening matching function of jobs, are of urgent need.

The discussion of introducing free education, that is taking place at the moment, should be expanded to include wider policies of this kind in the prospect.