Similar to what we observe in other countries, prices are rising rapidly in Japan. The headline consumer price index for August 2022 showed a year-on-year increase by 3.0 percent, and by 2.6 percent when fresh food is excluded. The rate of increase of this magnitude has not been seen since 1991 except for the period affected by the consumption tax rate hikes.

The recovery from the significant drop in the economic activity in Spring 2020 is slower in Japan than in other economies: the pre-COVID-19 peak in real GDP reached in the first quarter of 2020 has only been recovered in the second quarter of 2022. As a result, there is still a significant negative output gap of around 3 percent of potential GDP. The reason why there is a rapid rise in prices in spite of the weak aggregate demand is because there has been a significant rise in primary commodity prices since the Spring of 2020 and a rapid depreciation of the yen since March this year.

Worsening of the terms of trade behind the price rise

Primary commodity prices started to rise in the Spring of 2020 with the recovery of economic activities in China, the United States, and the European economies at the background. Price rise started off with metals, food and beverages, and agricultural raw materials, but was soon followed by a steep rise in prices of natural gas, coal, and crude oil. In particular, the rise in prices of natural gas stood out: reinforced by the impact of the Russia’s invasion of Ukraine and embargo of imports from Russia, the price now is about nine times what it was in January 2020. As figure 1 shows, such an increase in primary commodity prices has led to a steep rise in import price index in contract currency basis in Japan which imports a bulk of these commodities from abroad. 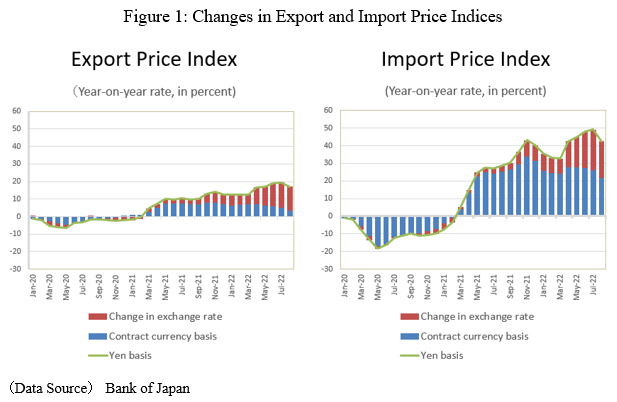 In many of the other economies, the rise in primary commodity prices reinforced the upward pressure on prices that resulted from the relatively rapid recovery of their economic activities: it led these economies to face a general and sustained rise in prices, or inflation.

In contrast with the actions taken by the central banks abroad, Bank of Japan is maintaining the quantitative and qualitative monetary easing (QQE) with yield curve control (YCC) in view of the lack of increase in prices other than food and energy. This has widened the interest rate differential between Japan and abroad, igniting a steep depreciation of the yen.

The exchange rate of yen vis-à-vis US dollar, which was around 115 yen in March this year reached 145 yen in September. In response, the Japanese monetary authorities intervened in the foreign exchange market to support the yen for the first time in 24 years. The yen strengthened for a short period of time after the action, but soon started to depreciate once again: as of 16 October, the rate has reached 148 yen per US dollar which is a level unseen in the last 32 years ago. 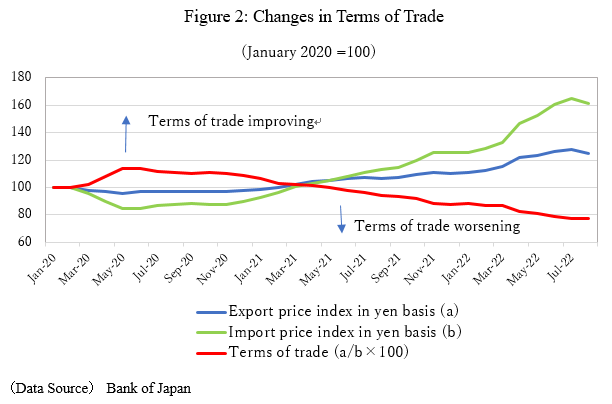 How to deal with the worsening of terms of trade

How should we cope with the worsening of the terms of trade that exerts a negative impact on the Japanese economy? Since it is an external shock and has to be borne, in one way or the other, by the Japanese economy as a whole, the issue is “who is going to bear the burden?”.

Interestingly enough, it is not the first time for the Japanese economy to face a significant worsening of the terms of trade. Before the COVID-19 pandemic, the Japanese economy faced such a similar situation during the first oil crisis (1973-1974), the second oil crisis (1978-1979), and the financial crisis caused by the subprime mortgage problem in the United States (2007-2008).

In the following, the way the Japanese economy coped with these situations will be analyzed. The data used in the analysis comes from the tables on the “Supply and Demand of Goods and Services” (Supporting table 1) and on the “Gross Domestic Product and Factor Income Classified by Economic Activities” (Supporting Table 2) of the Annual Report on National Account for 2020. From these tables, the value of “total supply” (“gross output” plus “imports”) will be broken down into values of its four components; i.e., “intermediate inputs etc.” (sum of “intermediate input”, “consumption of fixed capital”, and “taxes on production and imports less subsidies”), “imports”, “wages” (“compensation of employees”), and “profits” (“operating surplus and mixed income”).

A. The first oil crisis

For the first oil crisis, changes in the total supply and its components can be shown as Figure 3. 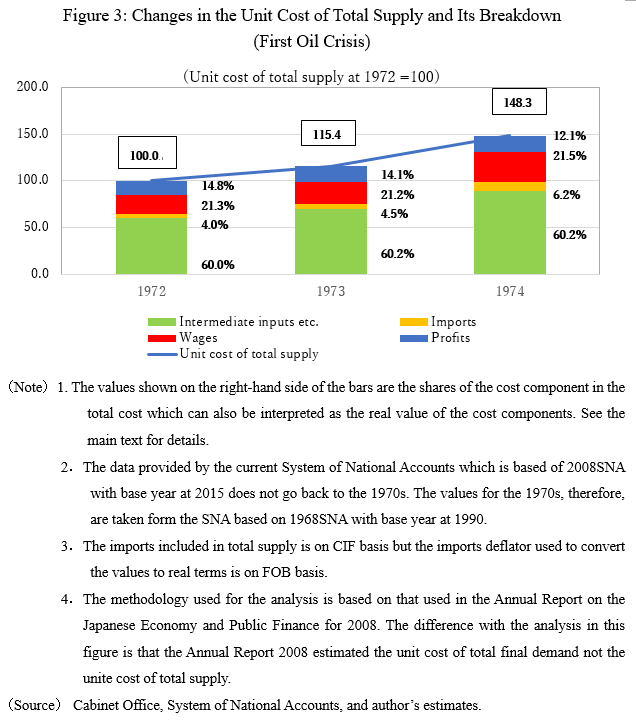 The figure shows that unit cost of total supply rose by a total of 48.3 percent in 1973 and 1974. It is a result of the steep rise in oil price in the first oil crisis. Its direct impact on the unit cost of total supply is reflected in the rise in cost of imports. However, the increase in oil prices has a secondary effect on other components as well: intermediate inputs, wages, and profits also rose during the period (shown as the increase in heights of the components in the bar for each year). It shows that oil prices had ignited a price rise in other goods and services. This is why the inflation during the period was called the “frenzied price hike”.

However, if we see the changes in the nominal cost components in terms of their shares in nominal total supply, the picture is little different. The shares calculated in this way, which is show by the numbers in the right-hand side of the bars, shows the real value of each of the cost component when deflated by the total supply deflator (*).

*If we take wages as an example, the share of wages (WL) in nominal total supply (PQ) is WL/PQ, but this is equivalent to deflating the nominal unit cost of wages (WL/Q) by total supply deflator (P).

Real unit wage cost shows a rise from 21.3 in 1972 to 21.5 in 1974, whereas real unit profit shows a fall from 14.8 to 12.1 during the same period. The rise in real unit cost of imports, therefore, seems to have been absorbed by the decline in real unit cost of profits. In contrast, real unit cost of wages managed to see an increase, albeit a small one: it suggests that the rise in nominal unit cost of wages was somewhat higher than that of total supply deflator. It corresponds to the high wage increase achieved in the spring wage round in 1973 and 1974, which were 20.1 percent and 32.9 percent, respectively (please note that the wage increase announced at the spring wage round includes an increase in average worker’s wage resulting from a higher seniority). As a result, the labor income’s share in national income (NI) had risen during this period from 59.0 percent in 1972 to 60.1 percent in 1973 and then to 64.0 percent in 1974.

To summarize, the analysis shows that the worsening of terms of trade seen in the first oil crisis seems to have been absorbed by the corporate sector by squeezing profits while the household sector was sheltered from the impact by a series of high wage increase achieved during the period.

B. The second oil crisis

The outcome of the reaction to the first oil crisis, from hindsight, seems to have resulted in a serious blow to the corporate sector which also led the economy to a serious stagflation: the rate of increase in consumer price index was 32.2 percent in 1974 while real GDP in the same year dropped by 1.4 percent. 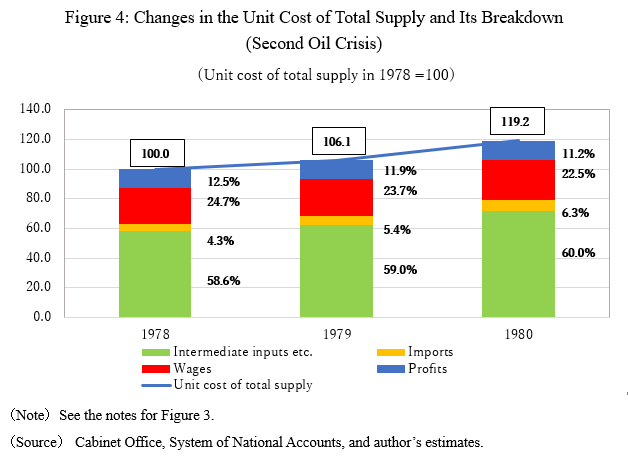 When the second oil crisis hit the Japanese economy, real unit cost of wages fell (24.7 → 23.7 → 22.5) together with real unit cost profit which also fell (12.5 → 11.9 → 11.2). It shows that, this time, the burden of the worsening of the terms of trade was borne by both the household and the corporate sectors. Correspondingly, labor income’s shares in NI only showed a modest increase (66.3 percent → 66.5 percent → 66.8 percent). The result of the spring wage round in 1980 was also a modest 6.74 percent increase. As a result, the impact of the second oil crisis on inflation and real growth in Japan was limited.

C. Financial crisis caused by the subprime mortgage problem in the United States

Similar outcome was also observed when the financial crisis caused by the subprime mortgage problem in the United States led to a steep rise in crude oil prices. It can be confirmed by Figure 5. 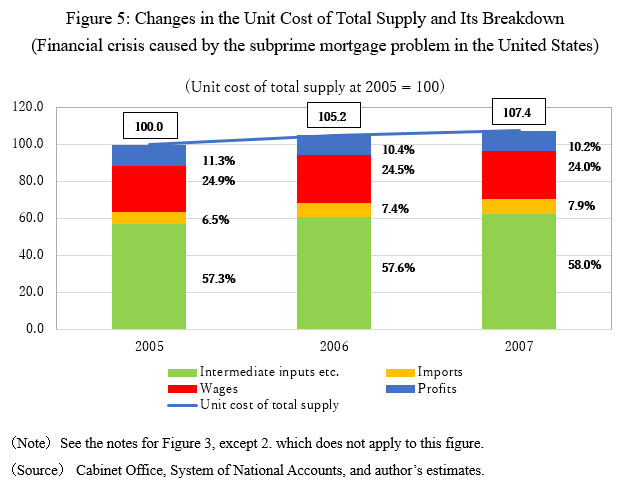 Critical test at the 2023 spring wage round

As we have seen, the negative impact of the worsening to the terms of trade has to be borne by the Japanese economy as a whole. How we absorb the negative impact has a significant implication for the macroeconomic performance of the Japanese economy. If it is tilted toward one of the household or the corporate sectors, it could lead the economy to a serious inflation, a deep recession, or both.

How the Japanese economy is going to respond to the current worsening of the terms of trade is of great importance to the recovery of the Japanese economy from the COVID-19 pandemic. In this respect, a critical test of whether the response will be an appropriate one not is quickly approaching: the spring wage round for the wage increase in 2023. The outcome of the wage round should be consistent with the burden that has to be borne by the Japanese economy, but, at the same time, should also be taking into account the negative impact on the purchasing power of the household sector. It may be a narrow path, but an optimal solution needs to be sought.